Blog - Latest News
You are here: Home / real_news / Yen Weakness in the Spotlight with Japan Inflation Numbers On Deck 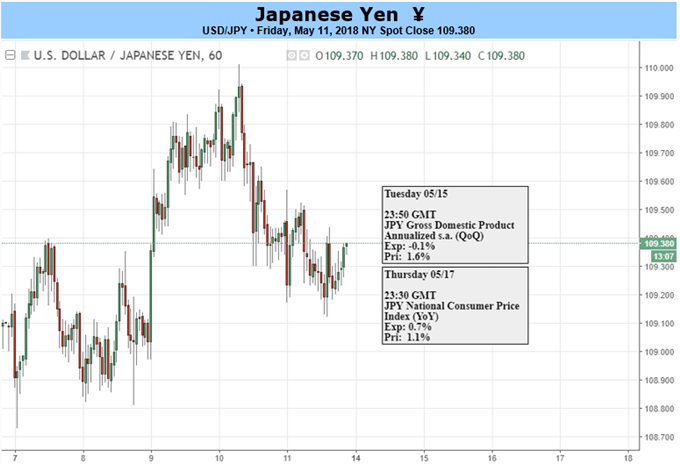 Want to see how other traders are approaching USD/JPY? Check out our IG Client Sentiment indicator.

Japanese Yen pairs saw quite a bit of back-and-forth action this week, with USD/JPY continuing the range-like behavior from the week prior. GBP/JPY did see some fireworks, although that was more-likely coming from dynamics in the British Pound. While USD-bulls remained in-force into Thursday’s US CPI release, USD/JPY put in another failed test at the 110.00 level. This had also happened last week, thereby helping to produce a double top formation in USD/JPY at a key area of psychological resistance. 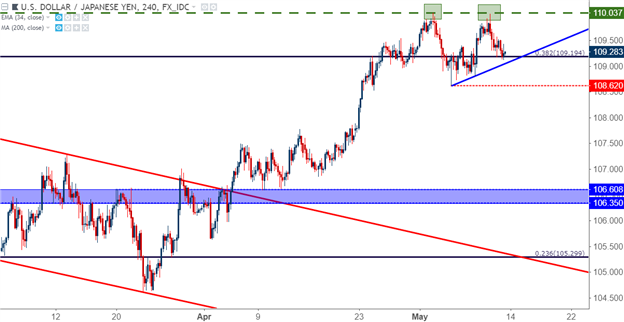 There were no high-impact announcements on the economic calendar this week out of Japan this week, and the more noteworthy items came from speeches with BoJ Governor Haruhiko Kuroda. Mr. Kuroda offered comments on a number of topics this week, key of which was a call on the Japanese government to step up structural reforms to allow for a more growth-friendly economic backdrop. This is the third pillar of the ‘Abenomics’ approach to ending the decades-long struggle that the Japanese economy has had with deflation; and this is a part of the strategy that we haven’t seen addressed in some time. Kuroda specifically mentioned that Japan has more work to do on deregulation, and this is likely pointing to a heavily-regulated labor market along with heavily-regulated industries in Japan like healthcare and agriculture.

Of specific interest to short-term dynamics in the Japanese Yen, Mr. Kuroda also touched on the topic of stimulus exit earlier in the week. While the Bank of Japan was nearing a Euro-like scenario earlier in the year, with strong growth in inflation threatening to push the bank away from a massive stimulus program; Mr. Kuroda addressed this head-on when he said that should conditions continue to improve, the BoJ will start to debate stimulus exit. While this may not be an earth-shattering pronouncement, nor did Mr. Kuroda offer any type of outlook as far as timing, the fact that he was willing to touch on this topic speaks volumes. The ECB appeared to try to avoid this as much as possible in 2017, and it merely led to more strength as that omission was taken ominously. It also shows that the BoJ is likely going to remain pedal-to-the-floor until absolutely necessary, and this brings focus on to next week’s data.

Japanese Inflation Data is On Deck

Inflation has been a pain point for the Japanese economy for almost 30 years now. After the Plaza Accord in 1985, the Yen went on a bout of strength that lasted for the next two decades and then some; and along with that currency strength came a lack of inflation and in some cases, deflation. The saga that Japan had with dismal rates of inflation is what helped to produce the backdrop for ‘Abenomics’ and the ‘Three Arrows’ approach; and now six years after Shinzo Abe’s election, the country remains full-force on the economic stimulus front.

In December, a bit of hope began to show when inflation printed at a 34-month high of one-percent. That trend continued in January with inflation spiking up to 1.4%, and then again in February when inflation came-in at 1.5%. In short order, Yen-strength had become a very noticeable theme, and given the scope of inflation gains, the prospect of additional Yen-strength remained as we were nearing a situation similar to what the Euro experienced last year.

That theme caught some respite in March when inflation numbers softened, and this helped the Yen to pullback. March inflation came-in at 1.1%. On Thursday evening of next week, we get Japanese inflation numbers for the month of April. Should this continue to show softening in inflation with a print of one-percent or less, the door for Yen-weakness re-opens. 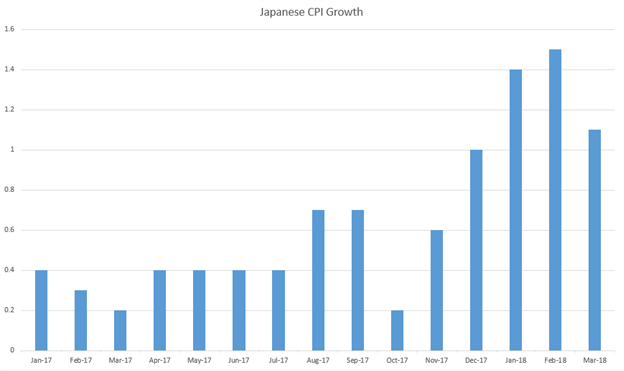 Perhaps more troubling on the inflation front was Core CPI readings. After starting 2017 by flipping into positive territory, this indicator continued to grow throughout the year, printing for three consecutive months at .9% as we opened into 2018. This came-in at one-percent in February, further fanning the flames of fear around the BoJ being forced away from stimulus. But this too softened in March with Core CPI dropping back to .9%. That’s the big number to watch for on Thursday, as another read at .9% or less keeps that door for Yen-weakness wide-open.

Core CPI Falls Back to .9% in March 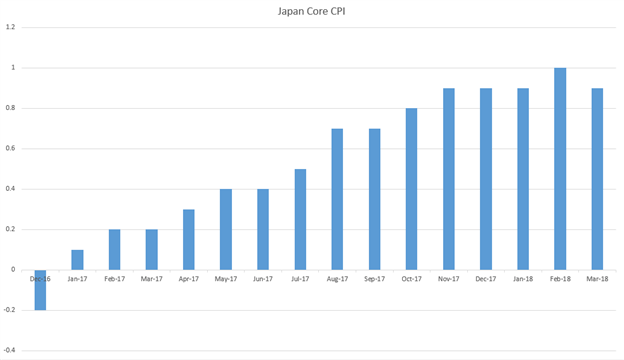 The forecast for next week on the Japanese Yen will be set to bearish. We looked at a related setup in USD/JPY in the article entitled, FX Setups for the Week of May 14, 2018.

GBP: A Bargain or a Bear Trap?

Australian Dollar’s Slide May Pause, But It’s Probably Not Over
Scroll to top