WTI oil futures for May delivery look fairly bullish in the 4-hour chart, continuing to trade inside an ascending channel since the mid of March. Yesterday the market touched a two-month high at 66.52, coming closer to break the three-year peak of 66.63 hit around the end of January.

Looking at momentum indicators, the RSI has slowed down further today after touching overbought territory yesterday, signaling that the market could weaken in the near-term. Stochastics have already posted a bearish cross, with the blue %K line moving below the red %D line, while the MACD continues to lose strength below its red signal line but still holds in positive territory, the latter being indicative of a positive trend. Yet, as long as the market continues to develop far above the Ichimoku cloud and the bullish cross between the 20- and the 50-period simple moving averages stays in place, the trend is likely to remain on the upside.

In case prices decline, the 20-period SMA, which currently stands at 65.28 could offer nearby support as it did in the past two weeks. A big step below from here could drive prices down to the bottom of the channel to the 65.00 key-mark, while a substantial close under this level could trigger the start of a downtrend. Then from here, the focus could shift to the 64.00 handle.

Alternatively, a push higher could meet today’s peak of 66.38, which lies near the middle of the channel. Further above, the attention could turn to the previous top of 66.52 which if broken could open the way towards the three-year high of 66.63 and the 67.00 psychological level. 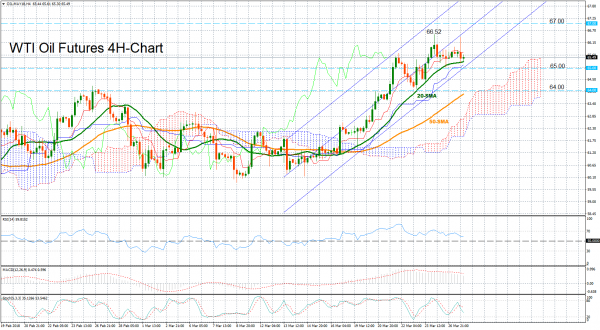 GBP/USD Remains Supported Ahead Of US GDP
Scroll to top