Blog - Latest News
You are here: Home / Cryptocurrency News / When Is a Bitcoin Not a Bitcoin? When It’s an Asset, Says G-20 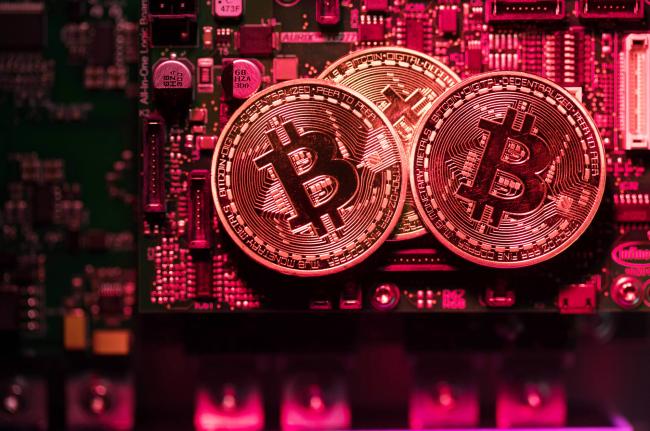 © Bloomberg. Three coins representing Bitcoin cryptocurrency sit on a computer circuit board in this arranged photograph in London, U.K., on Tuesday, Feb. 6, 2018. Cryptocurrencies tracked by Coinmarketcap.com have lost more than $500 billion of market value since early January as governments clamped down, credit-card issuers halted purchases and investors grew increasingly concerned that last year’s meteoric rise in digital assets was unjustified.

(Bloomberg) — Finance ministers seeking to crack down on tax evasion this week in Buenos Aires have cryptocurrencies like at the forefront of their minds.

The Group of 20 countries are moving to a consensus that cryptocurrencies aren’t money after all, but an asset. That means trades potentially could be subject to capital gains tax.

Cryptos “lack the traits of sovereign currencies,” according to a draft G-20 communique obtained by Bloomberg. The G-20 ministers are scheduled to discuss the issue in full Tuesday afternoon.

“Whether you call it crypto assets, crypto tokens — definitely not cryptocurrencies — let that be clear a message as far as I’m concerned,” said Klaas Knot, president of De Nederlandsche Bank NV, who also chairs the Financial Stability Board’s standard committee on the assessment of vulnerabilities. “I don’t think any of these cryptos satisfy the three roles money plays in an economy.”

It’s already proving an issue in the U.S., where only a tiny fraction of Americans are reporting their crypto deals to the Internal Revenue Service, according to Credit Karma Inc. Less than 100 of the first 250,000 federal tax returns filed as of February 2018 included a declaration related to crypto gains and losses, it found.

While few officials at the G-20 were talking about cryptos six months ago, it’s been hard to escape this year, after one of the wildest investment manias in history that’s led to worries about money laundering, cyberthefts, excessive speculation and more. The Financial Stability Board, which is chaired by Bank of England Governor Mark Carney, warned Sunday the rapid growth of cryptocoins such as Bitcoin may one day make them a threat to the financial system.

Countries are keen to set up an international regulatory framework while the crypto industry is still in its early stages, hoping to avoid a repeat over how to tax tech giants like Alphabet (NASDAQ:) Inc.

Here are some developments and comments over the past week on the issue: