This week, U.S stocks have rallied aggressively from their biggest weekly rout in 24-months, with major benchmarks climbing more than +3% on signs that an escalation of global trade tensions was beginning to ease.

Stateside, financials and technologies led gains yesterday as the S&P 500 index tested its biggest one-day rally since the summer of 2015. Monday’s rally erased Friday’s drop, though the gauge still had a ways to go to make up all of last week’s losses.

Elsewhere, the U.S 10-year Treasury yield has climbed ahead of this week’s major debt sales, while the ‘big’ dollar has dropped to a five-week low.

U.S President Trump’s administration is urging China to lower tariffs on cars and to open its market to U.S financial services as part of talks to resolve a rise in trade tensions that has shaken global markets.

Note: U.S Treasury Secretary Mnuchin and Liu He, China’s vice premier in charge of economic policy are committed to finding a mutually agreeable way to reduce the trade deficit.

In Japan, equities have rallied sharply overnight as immediate concerns about trade frictions between the U.S and China abated. The Nikkei ended +2.7% higher, while the broader Topix advanced +2.6%.

Down-under, Aussie shares climbed on Tuesday on a surge in base metal and oil prices, as trade war fears eased on reports and indications that the U.S and China are willing to renegotiate tariffs and trade imbalances. The S&P/ASX 200 index was up +0.7% at the close of trade. In S. Korea, the Kospi was up +0.6%.

In China, stocks snapped a four-session losing streak to end higher overnight, powered by robust gains in tech firms, and as trade war fears eased on reports of behind-the-scenes talks between the U.S and China. At the close, the Shanghai Composite index was up +1%, while the blue-chip CSI300 index was up +0.86%. 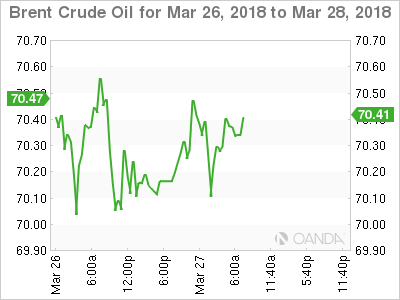 Oil rallied overnight, holding above +$70 a barrel for a third consecutive day, supported by concerns that tensions in the Middle East could lead to supply disruptions.

Note: The oil price has risen by more than +7% so far this month and by +5.3% in Q1, 2018, putting it on track for a third consecutive quarterly gain, something the market has not witnessed since late 2010.

Geopolitics and expectations of the world’s largest exporters controlling supply have helped push Brent above +$70 this year for the second time since late 2014, but analysts said this strength may not persist for long.

Price strength of the last couple of weeks is down to two factors; the first one is a stable OPEC output level and the second one is supply-side geopolitical developments in Venezuela, Libya and Iran.

Note: Capping prices is U.S production; shale oil drilling has already grown by nearly +25% in under 24-months to above +10m bpd.

Ahead of the U.S open, gold prices have rallied for a third consecutive session overnight as the dollar sank to a new five-week low, as capital markets eyed rising tensions between Russia and the West even as a U.S/China trade spat appeared to ease. Spot gold is up +0.16% percent at +$1,355.19 per ounce, after touching +$1,356.66 earlier in the session. 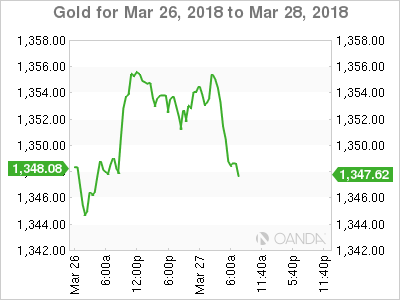 Narrow ranges across Bunds and most Euro and U.S spreads amid lower volumes suggest that the fixed income market has already entered Easter mode.

German Bund yields continue to trade in a narrow range and this is expected to remain slow in the short week ahead of Easter. The 10-year Bund yield is trading at +0.53%, up about +1 bps.

Note: Bunds will not get any input from supply, as there is not a scheduled bond sale in the eurozone today.

Stateside, product is plentiful. There is another +$89B of U.S bills for sale today and +$35B of five-year notes.

Note: The U.S Treasury is expected to auction about +$294B of bills and notes this week, its largest slate of supply ever. 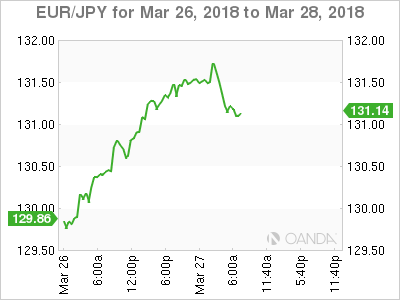 Risk appetite is on the rise.

Ahead of the open stateside, the USD tentatively probed its recent weekly lows against its Euro pairs, but saw its fortunes do a U-turn as the session wore on. The ‘mighty’ buck remains well well contained within its 2018 trading range.

The EUR/USD (€1.2414) initial probed the upper end of its Q1 price range, but has since drifted from its intraday highs after the ECB’s Liikanen cautioned about “tightening policy too soon” and reiterated that the Council’s view that “patience and persistence” was needed. The single currency also came under pressure from softer data in this morning’s session.

GBP/USD (£1.4115) has been unable to sustain holding above the psychological £1.42 level as cross-related selling in EUR/GBP weighed down the pound sterling. 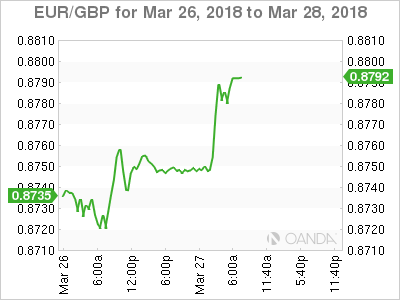 Earlier today, the European Commission said its economic sentiment indicator fell to 112.6 from 114.2 in February, hitting its lowest level since September 2017.

Digging deeper, businesses across the eurozone were less upbeat about their prospects in March, while bank lending to companies slowed in February, which could suggest that E.C economic growth may have passed its peak.

Note: The survey was undertaken when the E.U was threatened by new U.S tariffs on steel and aluminum.

The weakening of sentiment during March was spread across the manufacturing, services and retail sectors, while construction companies became more upbeat.

The ECB said bank lending to businesses grew +3.1% on the year in February, following +3.4% growth in January, when lending expanded at the fastest rate since May 2009. The slowdown may reflect a weakening of business confidence related to trade worries, and prove temporary. 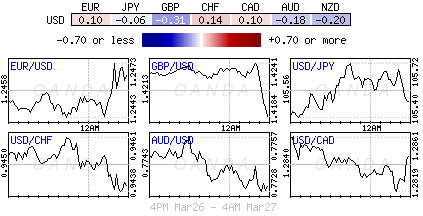