In this series we scale-back and take a look at the broader technical picture to gain a bit more perspective on where we are in trend. Here are the key levels that matter on the weekly charts for the DXY, GBPUSD and NZDUSD ahead of this week’s FOMC, BoE and RBNZ interest rate decisions. Review this week’s Strategy Webinar for an in-depth breakdown of these setups and more.

Check out our New 2018 projectionsin our Free DailyFX Trading Forecasts 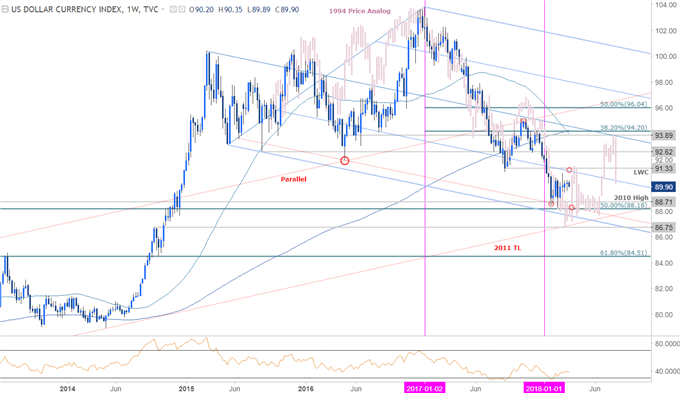 Notes: We’ve been tracking this price analog in the U.S. Dollar Index since last year and heading into the Federal Reserve interest rate decision on Wednesday, the risk remains lower while below the 2017 low-week close at 91.33 (bearish invalidation). Interim support rests with the 2010 high at 88.71 backed closely by confluence support at 88.18 where the 50% retracement of the 2011 advance converges on basic slope support.

Bottom Line: The focus remains on a break of the 88.18 – 91.33 price range. A downside break would likely fuel accelerated losses towards the 2011 trendline support around ~86.75 while a topside breach would suggest that a more significant low is in place.

New to ForexTrading? Get started with this Free Beginners Guide 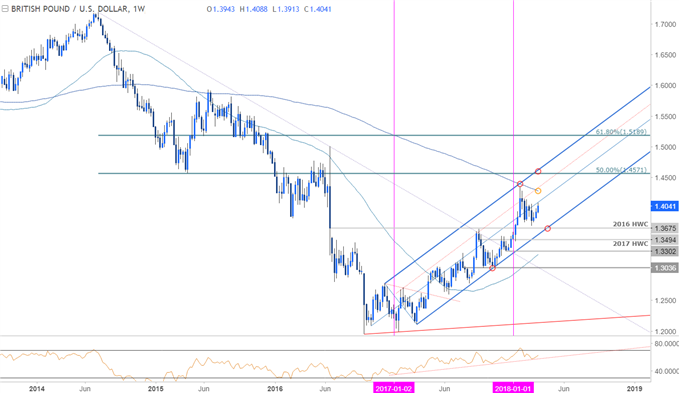 Notes: The British Pound has been trading within the confines of this ascending pitchfork formationextending off the 2016 / 2017 lows with prices turning just ahead of the upper median-line parallel early in the year. Price broke through the monthly opening-range last week and leaves the risk higher heading into the close of the month. That said, price is now approaching the median-line and a daily close above this threshold would be needed to keep the immediate advance viable. 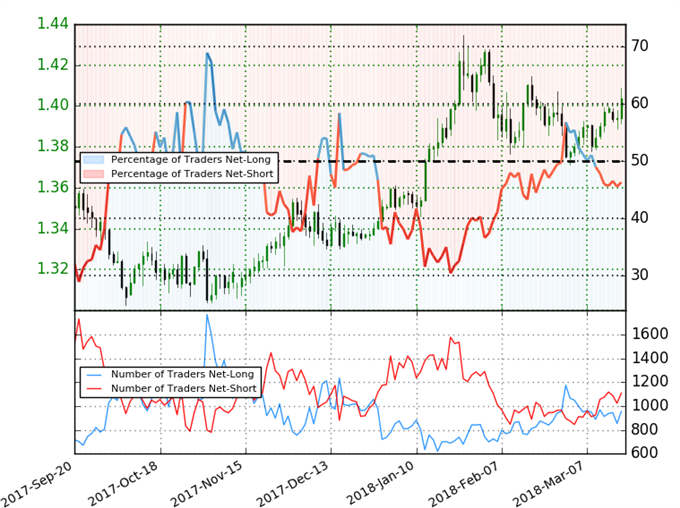 Why does the average trader lose? Avoid these Mistakes in your trading 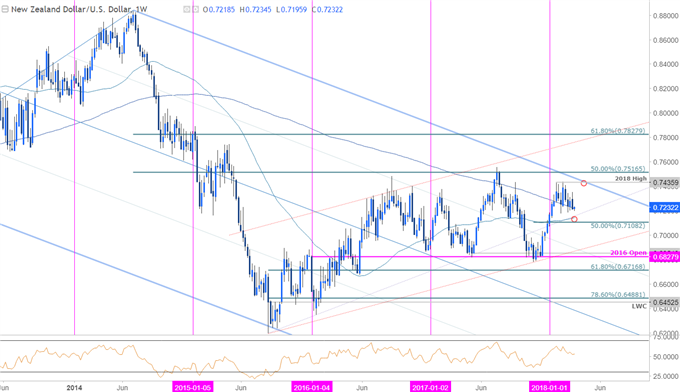 Notes: The New Zealand Dollar has continued to consolidate below the January highs at 7436 with the 200-week moving average catching the closes on the downside over the past few months. I’m looking for a resolution to this key price range over the coming weeks with key support (bullish invalidation) eyed at 7094-7140 where the 52-week moving average, 50% retracement, and the yearly open converge on basic slope support.

Bottom line: Kiwi remains in a well-defined range heading into the RBNZ interest rate decision later this week. Price may see some upside as we approach the range lows (note we turned today near monthly-open support at 7208) but ultimately, we’ll be looking for a breakout of this zone for near-term guidance. Note that near-term price action highlights a possible 5-wave decline off the monthly highs, suggesting that a recovery at these levels should prove correction and keeps the broader focus weighted to the downside for now.

British Pound, US Dollar Are In-Focus Ahead of UK CPI, FOMC and BoE