Blog - Latest News
You are here: Home / Fundamental Analysis / Week Ahead – Trading to Wound Down ahead of Easter; Dollar to Seek Support f...

After a busy week filled with central bank activity and political developments, there should be some restoration of calm in financial markets over the coming week as trading activity wounds down ahead of the Western Easter celebrations. Data releases out of the United States look set to dominate the calendar, with the core PCE price index for February likely to be the most closely watched item. Fed policymakers may steal the headlines however, as they return to the podium following the completion of the March FOMC meeting.

Japan will have the second busiest calendar after the US as retail sales, jobs and industrial output figures are published. Retail sales for February are due on Wednesday and will be followed by job figures on Thursday. Japan’s unemployment rate fell to 2.4% in January – the lowest in nearly 25 years. However, much to policymakers’ disappointment, the tight labour conditions have yet to stimulate higher wage growth. Another indicator for labour market tightness is the jobs/applicants ratio, which stands at its highest since 1973. The ratio measures the number of vacancies available per job seeker. A strong showing next week would boost hopes that higher wages should soon follow suit.

Also out on Thursday is the preliminary reading for industrial production data for February. After an unexpected 6.8% month-on-month drop in January, investors will be looking for a rebound in February. With yen strength showing no sign of abating, better-than-expected indicators would provide additional support. On the other hand, disappointing numbers alone are unlikely to generate much downside pressure. 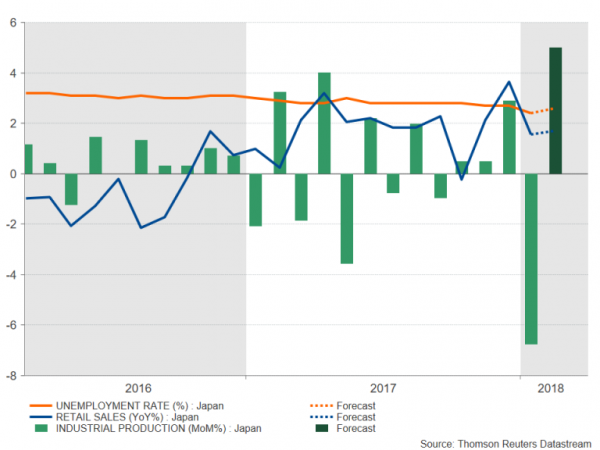 Little excitement out of euro area

The euro received a much-needed boost from a tumbling US dollar this week but is in danger of drifting lower again over the coming week with few major releases on the horizon. After a disappointing set of business confidence surveys for March this week, Tuesday’s Eurozone economic sentiment index isn’t expected to buck the trend. The gauge is forecast to drop from 114.1 to 113.4 in March. Flash CPI readings out of Germany may also attract some attention as it is seen as a good indicator for the euro-wide figure due in the following week. Germany’s harmonized consumer price index is forecast to accelerate from 1.2% to 1.6% year-on-year in March.

Traders will be treated to a third reading of the UK’s GDP growth figure for the fourth quarter on Thursday but will have to wait a while for the Q1 2018 data due at the end of April. No change to the 0.4% quarter-on-quarter figure is expected, which was revised lower in the second print. However, the quarterly investment numbers, which will be included in the GDP report, will be watched to assess how well business spending is holding up in Britain amid the Brexit uncertainty. The pound was boosted this week on the announcement of a Brexit transition deal and a hawkish Bank of England, as well as some upbeat data. A surprisingly weak print on business investment could act as a reality check for sterling bulls, which drove cable to above $1.42 this week.

Renewed optimism on the progress of NAFTA talks pulled the Canadian dollar away from near 9-month lows to a one-week high of C$1.2825 to the greenback this week. The prospect of a positive outcome in the NAFTA renegotiation has at least for now shifted the focus back on economic data to drive the loonie. Monthly GDP numbers on Thursday will provide the first indication as to how Canada’s economy started 2018. GDP is forecast to have expanded by 0.1% m/m in January. Producer prices for February, due the same day, will also be watched.

PCE inflation and GDP revisions unlikely to inspire the dollar

It’s been a bad week for the US currency, with the greenback losing ground by around 1% versus the yen to below the 105 level on the back of rising trade war fears. Those concerns are not likely to fade over the coming days, so investors will be looking at next week’s data releases for a possible lift.

The first big release will be Tuesday’s consumer confidence index by the Conference Board. The index is anticipated to set to a fresh 17-year high and climb to 131.0 in March. On Wednesday, the final reading of fourth quarter US GDP is expected to see a modest upward revision from 2.5% to 2.6% on an annualized basis. A higher figure could help add some much-needed upside momentum to dollar crosses.

The focus will then move to the personal consumption expenditures (PCE) report on Thursday. The data is expected to show personal income growth holding steady at 0.4% m/m in February, and personal consumption rising by 0.2% m/m, the same pace as in January. The other headline number from the report will be the core PCE price index, which is the Fed’s preferred price gauge. Core PCE inflation is forecast to inch up to 1.6% y/y in February after being stuck at 1.5% for four straight months. Any upside surprise to the figure could be a potential boost for the dollar. Other data to watch are pending home sales for February (Wednesday) and the Chicago PMI for March (Thursday). 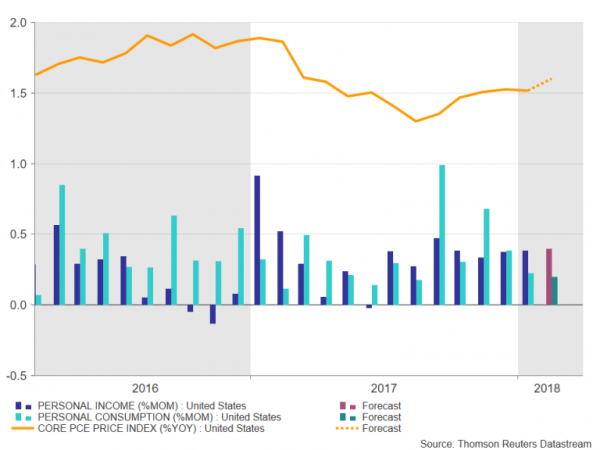 If the data fails to move the markets, traders may instead seek direction from the Fed as FOMC members line up to speak over the next seven days. The speakers will include William Dudley, Loretta Mester, Raphael Bostic, Patrick Harker. Should their language lean on the hawkish side, it could spur fresh buying interest in the greenback as it would come hot on the heels of an upward shift in the Fed’s rate path in March’s dot plot chart.

Week Ahead: Continued Focus on Trade and Politics Amid Light Data Schedule
Scroll to top