Blog - Latest News
You are here: Home / Fundamental Analysis / Week Ahead – All Eyes on FOMC Projections; Pound in Spotlight as UK Data, B...

It will be a crucial week for the greenback and sterling next week as the Federal Reserve and Bank of England meet to decide on monetary policy. It will also be an important week for the UK in terms of data as inflation, jobs and retail sales figures are released. Employment numbers are expected out of Australia too and Canada will be reporting inflation and retail sales figures as well. In the Eurozone, the focus will be on the March flash PMIs, while a policy meeting by the Reserve Bank of New Zealand will be another central bank event to watch.

Political issues could also dominate forex markets next week as European Union leaders meet at their Spring summit to discuss the Brexit transition deal, and G20 heads of government gather in Buenos Aires, Argentina, on March 19-20 with trade protectionism likely to become a contentious topic.

AUD and NZD look vulnerable ahead of Aussie jobs and RBNZ

Jobs growth slowed somewhat in Australia in January as an unexpected plunge in full-time employment overshadowed the positive headline figure posting its longest run of growth on record. Any further signs of weakness in the labour market in Thursday’s employment report for February could drag the Australian dollar lower, while Tuesday’s minutes of the RBA’s March policy meeting pose another risk. The currency is looking vulnerable after losing upside momentum this week when it failed to close above the $0.79 resistance. 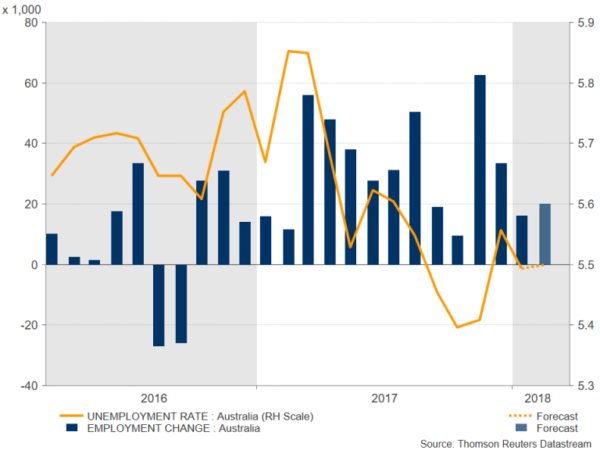 Its New Zealand counterpart also lost some steam after GDP data disappointed this week. New Zealand’s economy grew by a respectable 0.6% rate in the final three months of 2017, but this was slightly below estimates and not strong enough to bring forward expectations of how soon the RBNZ will raise rates. The RBNZ holds its monetary policy meeting on Thursday. No change in rates is anticipated but the kiwi could see some volatility if the central bank changes its language on the outlook, particularly if it sees a negative impact from the increasing protectionist stance of the United States.

Sticking with commodity-linked currencies, the Canadian dollar has been an underperformer against the US dollar this year as Trump’s trade policies have weighed on the currency. However, just as some optimism started to set in about the progress of the NAFTA talks, antagonistic comments by US President Trump and very dovish remarks by the Bank of Canada’s Steven Poloz drove dollar/loonie above the key resistance area of 1.30 this week. Against this backdrop, Friday’s CPI data for February and retail sales numbers for January may fail to generate much reaction unless there’s a big deviation from the expectations.

Japan CPI to give strengthening yen a reprieve?

Inflation figures out of Japan next week may add to the upside pressure currently facing the yen, which has been benefiting from the US policy uncertainty as well as a political scandal in Japan. The country’s core CPI rate, due on Thursday, is forecast to inch up from 0.9% to 1.0% year-on-year in February. However, with Bank of Japan policymakers recently sounding more forceful in reiterating that the bank is in no rush to exit its massive stimulus program, the yen will likely remain more sensitive to risk sentiment than domestic data. Reaction to Monday’s Summary of Opinions of the March policy meeting is also expected to be muted as the BoJ will probably keep to familiar script and not want to fuel further talk of policy normalization. Trade data on February exports and imports will be watched too on Monday, along with the Nikkei/Markit flash manufacturing PMI on Thursday.

After getting knocked down by a dovish Mario Draghi for the third time in a month on Wednesday, the euro will be looking to next week’s flash PMI readings from IHS Markit for some support. However, euro bulls will likely be disappointed as business sentiment across the Eurozone is expected to dip further in March. Both the manufacturing and the services PMIs are forecast to edge marginally lower in March’s preliminary reading on Thursday. The composite PMI for the region is expected to fall by 0.3 points to 56.8.

Although euro area activity remains at healthy levels despite a modest slowdown in the first quarter of 2018, a stronger currency and the threat of US tariffs could be starting to take a toll on European businesses’ outlook. There could be more proof of this in Germany’s closely tracked business survey gauges, which are also expected to worsen slightly during the month. The ZEW economic sentiment index, due on Tuesday, is forecast to decline from 17.8 to 13.0 in March, while the Ifo’s business climate index is expected to fall from 115.4 to 114.7 on Thursday. 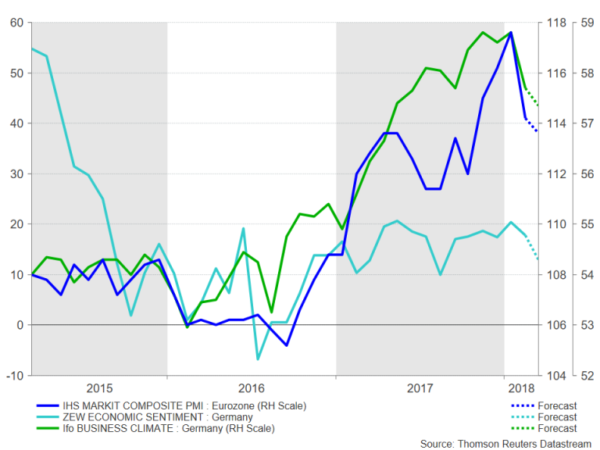 Pound set for a flurry of activity

Sterling’s recovery from March’s 7-week low of $1.3710 appears to have met a wall at the $1.40 level. Major risk events next week will determine if the pound will be able to overcome this resistance or reverse lower. The first test will come on Tuesday with the latest UK inflation figures. The annual rate of change in the headline consumer price index is expected to moderate to 2.8% in February from 3.0% in January. The core rate is forecast to fall to 2.5% from 2.7%. On Wednesday, the labour market report for January will be watched for any evidence of an acceleration in wage growth. Like in the US, the unemployment rate in Britain is currently near multi-decade lows. The jobless rate is expected to hold steady at 4.4%. However, wage growth remains anaemic despite the tight labour market. Average weekly earnings are forecast to quicken slightly to 2.6% y/y in the three months to January. Any signs of a convincing pick-up in pay growth would give the Bank of England more reason to maintain a hawkish tone when it meets on Wednesday and Thursday. The BoE will also be able to sift through Thursday’s retail sales figures before it announces its decision. UK retail sales are expected to grow by 0.4% month-on-month in February, rebounding from the slump in the prior two months. 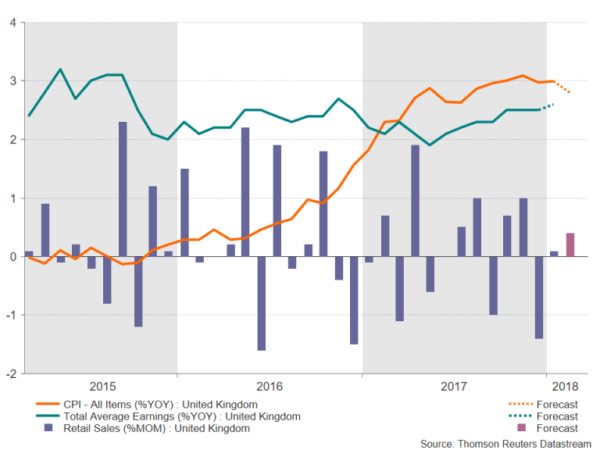 A solid set of figures next week would back the BoE’s thinking that some withdrawal of monetary stimulus is needed, possibly as early as May. However, apart from data, there is another pre-condition for the Bank for a May rate hike and that is whether or not the UK and the European Union will agree on a transition deal at the EU summit taking place on March 22-23.

News reports currently suggest the UK and the EU are close to clinching a deal. An agreement would remove a layer of uncertainty for British firms and clear the way for the BoE to raise rates in May. However, a no deal could push back a rate hike until August or November and trigger a sharp sell-off in the pound.

The US economic calendar will be a lighter one next week but the March FOMC meeting should ensure the dollar attracts plenty of attention. The major releases will include existing home sales for February on Wednesday, the IHS Markit flash PMIs for March on Thursday, and durable goods orders and new home sales for February on Friday. The data are unlikely to grab the usual interest in a week when the Fed publishes its latest views on the economy and as all recent evidence converges to only modest growth in the first quarter, with analysts sharply paring back their initial bullish GDP forecasts for the quarter.

New Fed chief Jerome Powell will chair his first FOMC meeting on Tuesday and Wednesday with the consensus being that the committee will decide to raise the fed funds rate by 25 basis points to 1.50%-1.75%. With a rate hike being more or less fully priced in by the markets, the bigger focus will be the Fed’s quarterly projections, and in particular, the new dot plot chart, which draws out the FOMC’s predicted path of interest rates. The most probable outcome is that Fed policymakers will maintain a cautious stance and stick to median forecasts of three rate hikes but with a slight bias towards four moves. A hawkish dot plot could provide the dollar with a bit of a lift, though this would also risk triggering another panic in bond and equity markets. Not-so-hawkish projections on the other hand could push the dollar deeper into bearish territory.

US Fed and BoE to Guide Markets
Scroll to top