USDJPY has experienced considerable declines in recent days and in the bigger picture ever since reaching a four-month high of 113.74 on December 12; the pair has shed 7.6% since recording that peak. Earlier in Friday’s trading, USDJPY posted a 16-month low of 104.63.

The Tenkan- and Kijun-sen lines are negatively aligned, projecting a bearish short-term picture.

A more decisive break below the 105 handle would start to increasingly shift the focus to the area around the 103 level which was relatively congested back in 2016 and could provide support, while the 104 round figure above could also act as support before price action starts testing the area just mentioned. Even steeper declines would start bringing into view the 100 mark, a level that may hold psychological significance.

On the upside and in case the pair posts some gains, resistance might come around the current level of the Tenkan-sen at 105.69 and then the Kijun-sen at 106.26. If the range around these levels is overcome, the pair would start challenging the upper bound of the recent movement between roughly 105–108.

The medium-term picture is looking increasingly negative, with the pair further distancing itself to the downside from the 50- and 100-day moving average lines. In this respect and adding to the conviction for a bearish medium-term outlook, a bearish cross was recorded in late January when the 50-day MA moved below the 100-day one, while price action is also taking place below the Ichimoku cloud.

Overall, both the short- and medium-term outlooks are bearish at the moment. 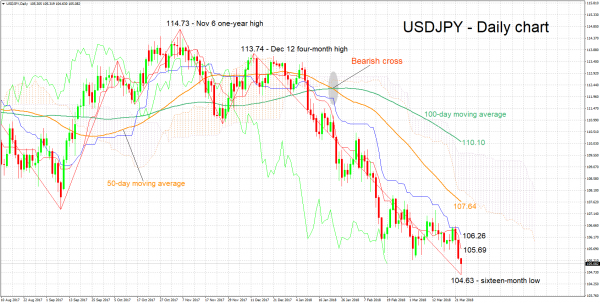