Blog - Latest News
You are here: Home / Fundamental Analysis / US Final GDP for Q4 among the Few Events for USD this week

The US will release the final estimate of GDP for Q4 2017 on Wednesday, at 1230 GMT. While these data may be viewed as somewhat outdated given that Q1 is now almost over, they could still gather some attention in a quiet calendar week, especially in case of a notable deviation from what is anticipated.

The US economy has been humming along nicely in recent quarters, growing at a pace of more than 2%, as a robust labor market and healthy consumer spending remained the pillars of economic expansion. The final reading of GDP for Q4 is expected to confirm that, by revising economic growth higher to a 2.7% annualized rate, from 2.5% in the second estimate. The anticipated upward revision is probably owed to stronger-than-expected construction spending and manufacturer inventories data that were released after the second estimate of Q4 GDP. Alongside the GDP print, the US will also release the final core PCE price index for Q4, though this is projected to remain unrevised at 1.9% annualized. 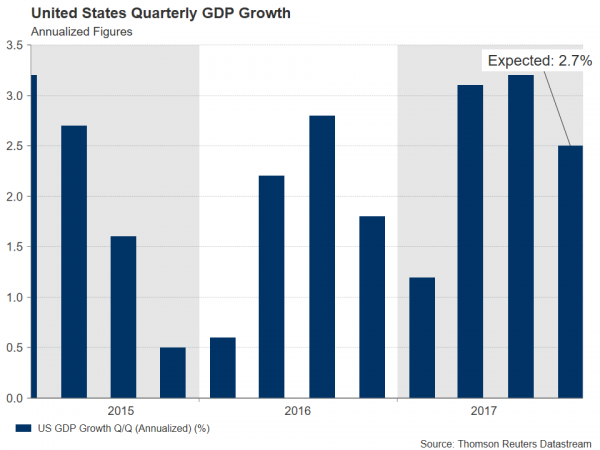 Remember these data only refer to the quarter ending in December, so they will not capture any positive-growth effects arising from the recently-passed tax cuts, nor any negative effects owed to the latest uncertainties over global trade. Investors looking for such impacts will probably have to wait for the release of the first estimate of GDP for Q1 2018, due in late April.

Still, the Q4 data could attract some attention, considering how quiet the economic calendar is this week. Following the latest Fed rate hike, markets see practically no chance of another move at the next meeting in May, but see a 78% probability for a hike at the gathering after that, in June. A higher-than-anticipated revision in the final GDP print could amplify the case for a June hike and thereby, help the dollar recover somewhat. Dollar/yen may spike higher and aim for a test of the 106.65 territory, marked by the March 21 highs. A potential upside break of that area could open the way for a test of the March 13 top, at 107.30.

Conversely, a disappointment in these data – for example growth staying unrevised at 2.5% – could bring the US currency under renewed selling interest. Dollar/yen could edge lower and test the 105.20 barrier, identified by the March 2 lows. If the bears manage to break below that zone, support may be found near the pair’s recent lows, at 104.55.

Finally, perhaps the most important drivers for the dollar’s near-term direction will be the core PCE price index, as well as personal income and spending figures for February, all of which will be released on Thursday. Besides data, any updates on the trade front will also be crucial for the greenback. Intensifying trade concerns usually cause flows into US Treasuries, resulting in lower US yields and hence, a weaker US currency.