Blog - Latest News
You are here: Home / real_news / US Dollar on Offensive Before Fed Rate Decision. Will it Last? 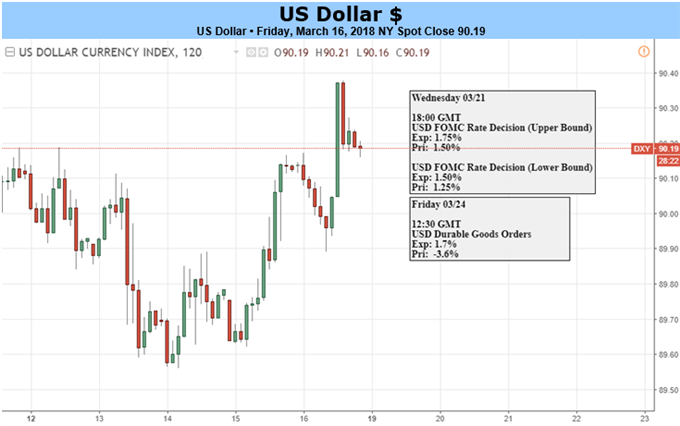 Fundamental Forecast for the US Dollar: BULLISH

Join our webinar for live coverage of the FOMC rate decision and its impact on the US Dollar!

A week marked by seesaw price action ended with a spirited push higher for the US Dollar. The rally was especially notable in that it occurred without an obvious fundamental catalyst. The week’s top data point of interest was February’s CPI print. The headline inflation rate printed exactly in line with forecasts at 2.2 percent, which eased worries about Fed rate hike acceleration and sent the greenback lower. A weekly bottom started taking shape a mere five hours later however, from which it rallied into Friday’s close.

The recovery tracked a parallel rise in front-end US Treasury bond yields. That this occurred after the influence of the CPI release subsided appears telling. The next bit of noteworthy event risk would not come until the FOMC monetary policy announcement on March 21. After newly minted Fed Chair Jerome Powell led a hawkish pivot in officials’ rhetoric in recent weeks, it seems entirely reasonable to suspect that it may mark a pickup in the expected pace of stimulus withdrawal. The Dollar’s rise then look like pre-positioning.

The priced-in rate hike trajectory implied in Fed Funds futures for 2018 has stabilized around 75 basis points, matching the Fed’s own forecast. Investors’ view for 2019 remains modest however. One rate hike is expected and the odds of a second are seen as worse than even. Nothing is on the books for 2020. That leaves plenty of scope for the Federal Reserve to signal a more assertive disposition. The first post-announcement press conference with Chair Powell presents a further opportunity to reinforce the pivot.

The US currency’s preemptive rally telegraphs the markets’ concern with such an outcome. Momentum will probably slow ahead of the announcement, with traders unwilling to commit until after it hits the wires. When that happens, fireworks are likely. The Fed’s primacy in shaping trends coupled with a tame docket in the days thereafter also means follow-through faces few obstacles. Indeed, short work was made of Rex Tillerson’s actual ouster from the Trump administration and H.R. McMaster’s rumored one last week.

FX Factors to Watch: If You Build It, Will They Buy? A Demand Led World