Blog - Latest News
You are here: Home / Technical Analysis / US 30 Index Trades in Symmetrical Triangle; Weak Bias in Near Term

The US 30 index has been developing within a symmetrical triangle since January 29 in the 4-hour chart as it failed several times to create higher highs and lower lows. The prices completed numerous days with weak momentum and are trading slightly above the lower boundary of the triangle.

Support was met around the 24665 region, forcing the index to turn to the upside. The neutral bias in the near term is supported by the deterioration in the momentum indicators. The MACD oscillator climbed above its trigger line, however, it is still moving below the zero line. Also, the RSI indicator holds below the 50 level and is flattening, signaling weak momentum in the market.

In case of a downward penetration of the symmetrical pattern, this would indicate a bearish bias. A drop below the 24665 level would reinforce the short-term negative view and open the way towards the 24210 level.

An alternative scenario is a continuation of the previous strong bullish trend if the index successfully surpasses the upper boundary of the triangle. A jump above 25200 could drive the price towards the 25500 significant resistance level, which has been a major resistance area in the past. A break above it could open the door for 25830. 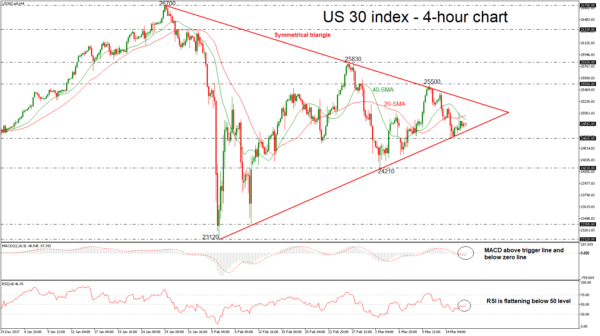 The USDCAD break of 1.3000 was key, but there is another key break today.