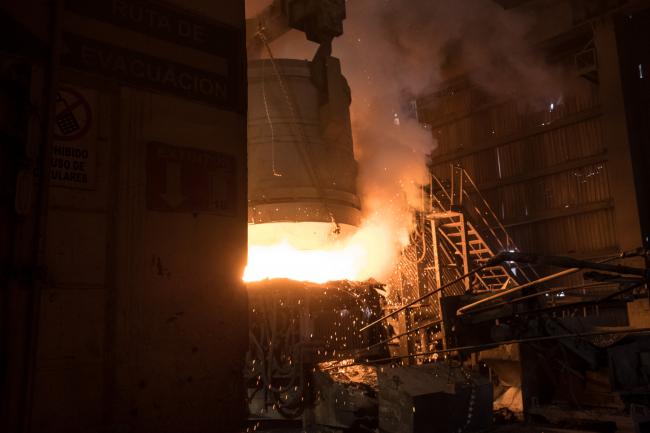 © Bloomberg. A furnace melts scrap metal at the Grupo Acerero SA steel processing facility in San Luis Potosi, Mexico, on Tuesday, March 6, 2018. U.S. President Donald Trump has made good on his promise by imposing tariffs of 25 percent and 10 percent, respectively, on steel and aluminum imports. He handed neighbors Canada and Mexico an olive branch by exempting them — as long as the U.S. gets what it wants in talks to revamp the North American Free Trade Agreement.

(Bloomberg) — The Trump administration will delay imposing steel and aluminum tariffs on some nations while negotiations are taking place for a more permanent exemption, U.S. Trade Representative Robert Lighthizer said.

The USTR office is actively discussing exemptions at the request of the European Union, Australia and Argentina, and similar talks are expected with a “great number” of other nations including Brazil, Lighthizer said during a briefing to the House Ways and Means Committee on Wednesday. The goal is to wrap up the talks over exemptions by the end of April, he said.

“I believe that countries will get out as we come to agreement, that some countries will be in a position where the duties will not apply to them in the course of the negotiation,” he said. “For example Canada and Mexico, but others. So you don’t have a situation where you have the status quo, 25 percent tariff, and then they get out and there’s kind of bump and it changes real commercial relationships.”

Trump announced this month he was slapping 25 percent tariffs on imported steel and 10 percent on aluminum but excluded Canada and Mexico on the condition they successfully re-negotiate the North American Free Trade Agreement. Lighthizer said on Wednesday that South Korea is in a similar circumstance, as the two countries work to “refurbish” their own bilateral trade pact.

Lighthizer said U.S. and South Korea are working through the “last few issues” and that he’s hopeful they will come up with “amendments to the agreement” that will be supported by U.S. lawmakers.