Blog - Latest News
You are here: Home / latest_news / U.S. Said to Push China on Cars and Finance in Tariff Talks 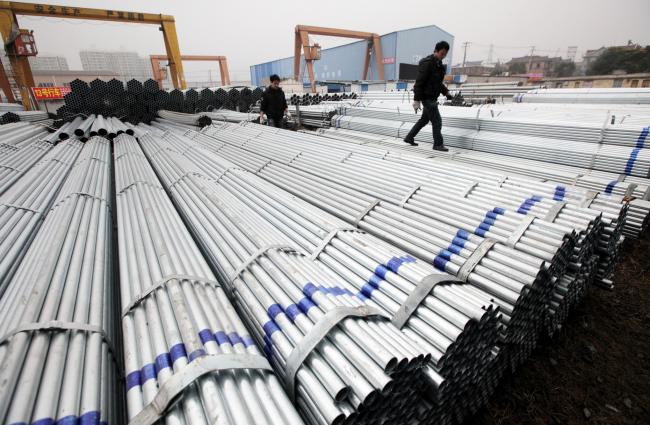 © Bloomberg. A worker walks on stacks of steel pipes at a storage yard in Shanghai, China.

(Bloomberg) — The Trump administration is urging China to lower tariffs on cars and open its market to U.S. financial services as part of talks to resolve a rise in trade tensions that has shaken global markets, according to a person familiar with the matter.

Treasury Secretary Steven Mnuchin called China’s Liu He to congratulate Liu on his appointment this month as vice premier in charge of economic policy, said the person, who spoke on condition of anonymity because the discussions aren’t public. The two discussed the trade deficit between the two countries and committed to finding a mutually agreeable way to reduce the gap, the person said, adding they have exchanged correspondence.

Meanwhile, one of President Donald Trump’s senior trade advisers says the president is seeking a nearly one-third narrowing of the U.S. trade deficit with China.

Trump wants to see a $100-billion reduction in America’s trade deficit with China this year, as well as action on intellectual property, White House trade adviser Peter Navarro told Bloomberg Radio on Monday. The U.S. had a $337-billion trade shortfall in goods and services with China last year.

The U.S. push to negotiate a detente with Beijing comes after Trump’s plan to slap tariffs on $50 billion in Chinese imports sparked a selloff in U.S. stocks last week. Economic talks between the two superpowers have been stuck in neutral since a meeting last year through their main vehicle of negotiation, known as the Comprehensive Economic Dialogue, ended without a joint statement.

Trump ordered the tariffs after his officials concluded Beijing engages in a range of policies that violate U.S. intellectual property. The president also asked Mnuchin to come up with restrictions on Chinese investments in the U.S., details of which the Treasury secretary should announce soon, Navarro said.

Navarro dismissed warnings the global economy is on the verge of being swept up by a tit-for-tat cycle of retaliation between the world’s two biggest economies.

“Everybody needs to stop talking about trade wars and trying to push up these tensions,” he said. “We are free traders, but what the president has said is we have a structural problem in the global economy, massive trade imbalances that are fueled by unfair and non-reciprocal trade.”

The Trump administration is under growing pressure to explain the details of its trade policies after fears of a trade war between the U.S. and China sent stocks tumbling last week. Equities started bouncing back on Monday morning, with major benchmarks surging the most since early February.

“All I see are green lights for growth,” Navarro said.

China unveiled tariffs on $3 billion of U.S. imports in response to separate U.S. steel and aluminum tariffs, and its ambassador to the U.S. said all options are on the table, though the Asian nation doesn’t want a trade war.

“There remains a huge amount of uncertainty over what happens next,” Capital Economics analysts wrote in a research note on Friday. “But with the protectionists seemingly in the ascendancy in the White House, the possibility of further escalation is high.”

Meanwhile, the U.S. is still negotiating with the European Union, Argentina, Australia, Brazil, Canada and Mexico on whether those countries will be subject to steel tariffs. The White House announced last week the nations would be excluded until May 1. South Korea says it has negotiated an exemption as part of free-trade talks with Washington.

Read a Bloomberg QuickTake on the Trade Policy Upheaval

The U.S. is scheduled to resume discussions with Canada and Mexico early next month on an overhaul to the North American Free Trade Agreement, adding another potential flash point.

Amid the tumult, the administration is sending mixed signals about how far it is willing to go. Just before the China tariffs were announced, Navarro signaled a break from the diplomatic approach toward China that has defined U.S. economic policy since Richard Nixon visited the Communist nation in 1972.

But on Sunday, Mnuchin said he’s optimistic the U.S. can reach an agreement with China that will forestall the need to impose the tariffs that Trump has ordered.

It’s not clear when the China tariffs will take effect. Lighthizer has 15 days from March 22 to release a proposed product list, though a USTR fact sheet says he plans to release it as early as this week. After the list is released, there will be a 30-day comment period.

Bloomberg Economics estimates that a global trade war would cost the world economy about $470 billion by 2020, or 0.5 percent of output.

(Updates with details of U.S. requests starting in first paragraph.)