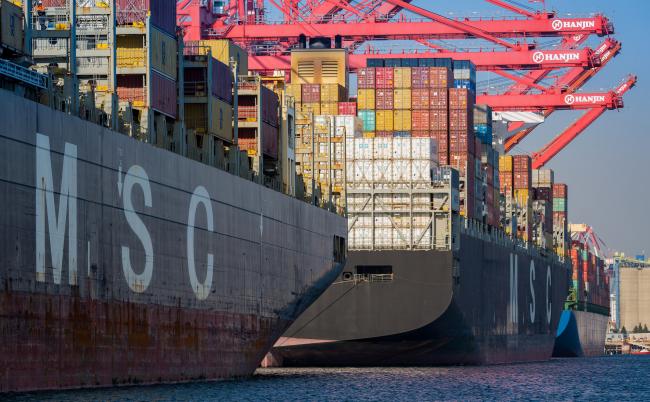 © Bloomberg. Cargo ships line up at the Total Terminals berth at the Port of Long Beach in Long Beach, California, U.S., on Wednesday, April 4, 2018. The U.S. trade deficit widened by more than forecast to a fresh nine-year high in February amid broad-based demand for imports, ahead of Trump administration tariffs that have raised the specter of a trade war.

(Bloomberg) — G-20 officials hoping to diffuse trade tensions aren’t making much headway at meetings so far, even as they pressure the U.S. and China to refrain from any sudden unilateral actions.

There was little progress on trade at a smaller meeting of G-7 economies Thursday, according to a person familiar with the talks who declined to be identified because the discussions were private. Finance ministers and central banks from the G-20 met for dinner and are holding a series of meetings Friday at the spring meetings of the IMF and World Bank.

The overriding message of officials meeting in Washington this week has been that trade tensions between the U.S. and China risk eroding business and investor confidence, even as global growth enjoys its best upswing in years. And the U.S., which has announced new tariffs on steel among other steps, has been the main preoccupation.

“We need to pivot where we are,” International Monetary Fund First Deputy Managing Director David Lipton said in an interview on Bloomberg TV. “The U.S. needs to be letting go of unilateral pressures to achieve its goals.”

Officials at the G-7 meeting expressed concerns to Treasury Secretary Steven Mnuchin about the damaging effects of a trade war, but the issue wasn’t advanced much, the person said. A Treasury spokesman declined to comment on the matter.

In a statement Friday, Mnuchin said the IMF should be a “strong voice” for its members to dismantle trade and non-tariff barriers and to protect intellectual property rights.

“We strongly believe that unfair global trade practices impede stronger U.S. and global growth, acting as a persistent drag on the global economy,” he wrote in a statement. “Ensuring that trade is free, fair, and reciprocal will boost global trade and support stronger, more sustainable growth.”

But even as they meet, tensions seem to be escalating. Earlier Thursday, Heath Tarbert, an assistant secretary to the Treasury Department’s international affairs office, said the U.S. is considering using an emergency law to curb Chinese investments in sensitive technologies. It’s one of the options the Trump administration is looking at to punish China for what it sees as violations of American intellectual-property rights.

Beijing fired back forcefully on Friday. “The U.S. is thinking and acting like a bully,” foreign ministry spokeswoman Hua Chunying said at a daily briefing.

Pressure is also building on China to do more to open up its economy.

“We also do understand the frustration,” of the U.S., Hammond said. “China is not as open an economy as we would like it to be and one of the things that I’ve been focusing on this week is trying to persuade China to take positive actions to open its economy.”

(Updates with statement from Mnuchin in seventh, eighth paragraphs.)