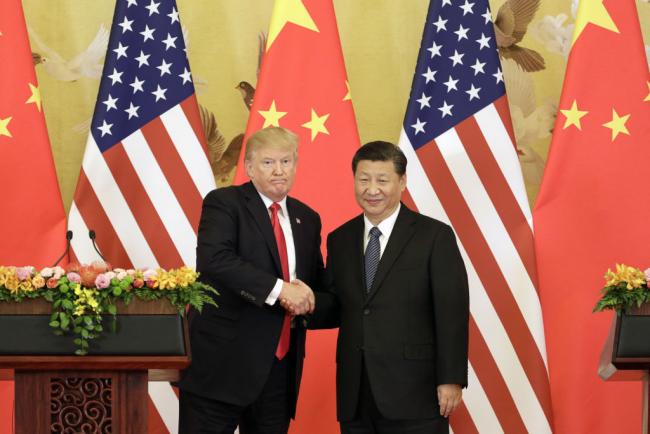 © Bloomberg. FILE: U.S. President Donald Trump, left, and Xi Jinping, China’s president, shake hands during a news conference at the Great Hall of the People in Beijing, China, on Thursday, Nov. 9, 2017. The one year anniversary of U.S. President Donald Trump’s inauguration falls on Saturday, January 20, 2018. Our editors select the best archive images looking back over Trumps first year in office.

(Bloomberg View) — U.S. President Donald Trump has finally carried out his threats on trade with China, announcing on Thursday the start of a process that will lead to sweeping tariffs on Chinese imports and restrictions on Chinese investments. Trump hopes to compel a recalcitrant China to end a range of unfair business practices and open its market wider to U.S. companies, thus reducing the large U.S. trade deficit.

QuickTake Free Trade and Its Foes

In fact, Trump could be doing just the opposite — taking the pressure off Chinese President Xi Jinping rather than ramping it up. In some respects, Trump’s tariff plan plays right into Xi’s hands.

Part of this is political. Xi’s central message to the Chinese public, pounded home by relentless state propaganda, is that he’s the man who will raise China to its proper place on the world stage. A victim of Western predations for too long, Xi’s China will right the wrongs of history and achieve the “China Dream” — its return as a prosperous, peaceful world power.

Trump’s aggressive stance on trade helps Xi play his prescribed role in this grand drama. A quieter approach that elicited real concessions from Beijing might cast doubt on Xi’s nationalist credentials. By contrast, Trump’s big, very public challenge presents Xi with a stage-perfect opportunity to show himself an inveterate defender of Chinese interests, standing up to yet another Western bully.

He can do so while being fairly confident of outlasting Trump in a slugfest. Xi, who has set himself up to remain China’s president for life, doesn’t face anything like the near-term political pressures Trump does, with midterm elections looming just months from now. Also, exports no longer play as big a role in the Chinese growth story as before: China’s trade balance has shrunk from about 7.4 percent of gross domestic product in 2007 to 3.5 percent last year. Unless the tariff battle escalates dramatically, the hit to Chinese growth from U.S. duties should be minimal.

More importantly, Trump may be unintentionally aiding Xi’s long-term economic agenda. Though Xi and his policy team happily champion globalization and free trade in public, the Chinese president has shown himself to be every bit the economic nationalist Trump is — possibly more so. China’s government is investing billions to develop industries, such as semiconductors and commercial aircraft, that are now dominated by the West. The “Made in China 2025” industrial program envisions using state support to promote a wide range of advanced industries, including electric vehicles and medical devices. The program aims to supplant foreign companies rather than invite them in.

Despite official pledges, Xi’s economic agenda hasn’t included substantial free-market reforms. Only occasionally, and when it suits China’s interests, does the government follow through. China is talking about inviting more foreign businesses into elderly care, for instance — hardly surprising, given how quickly the population is aging. Promises to allow greater foreign participation in the financial sector also make sense given the bad-loan burden weighing on Chinese banks; they could use some outside cash to recapitalize.

The new U.S. tariffs provide Xi an ideal excuse to do what he’s inclined to do anyway. The government can put off any market-opening measures, continue to promote and protect Chinese industry — and still play the innocent victim. Already, China is said to be ready to hike restrictions on U.S. exports in retaliation for the new tariffs, further closing off its market.

True, U.S. efforts to keep advanced technology out of Chinese hands could set back China’s attempt to upgrade its industries. And by continuing to stall on reforms, China could raise the ire of other major trading partners — in Europe, for example.

Xi is taking a calculated risk, however. Trump has alienated so many of his allies that they’re unlikely to gang up on China in partnership with the U.S. Look at how Canada, Germany and other close U.S. friends joined China in deploring Trump’s blanket tariffs on steel and aluminum.

Perhaps at some point, American and Chinese officials can sit down and resolve their differences through negotiation. That may have to wait for a change in leadership in the U.S. Until then, Xi may be perfectly happy to wage a trade war. The benefits appear to outweigh the costs.

Michael Schuman is a journalist based in Beijing and author of “Confucius: And the World He Created.”