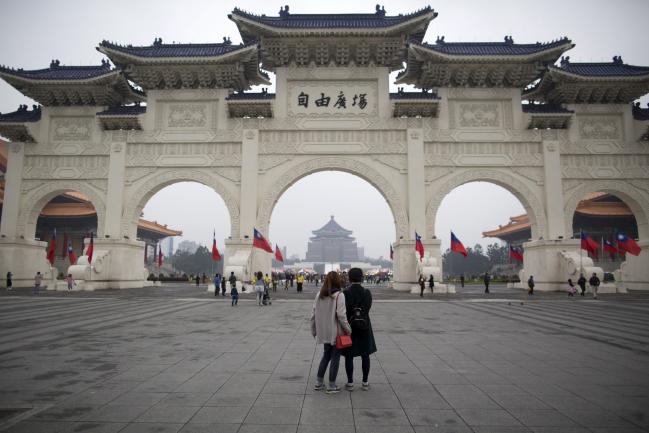 © Bloomberg. Visitors stand at Liberty Square as the Chiang Kai-shek Memorial Hall stands in the background in Taipei, Taiwan, on Sunday, Dec. 31, 2017. Taiwan’s currency rose 18 percent in 2017, its best annual performance in three decades, largely the result of a weakening greenback.

Even as global investors shift from worrying about a second Korean conflict to a potential China-U.S. trade war, decades-old disagreements over democratically run Taiwan are simmering. For China at least, that is a more serious concern.

“Compared with economic and trade issues, the Taiwan issue is a top priority for Beijing and is more politically sensitive,” said Fu-Kuo Liu, an international relations professor at National Chengchi University in Taipei. “The U.S. will measure relations with Taiwan based on its national interest, and Taiwan will be a pawn to Beijing.”

The dispute centers on Taiwan’s 70-year slide into diplomatic isolation after ending up on the losing side of the Chinese civil war. While the island is self-ruled and enjoys American military protection, China considers Taiwan a province and has made acceptance of its “one-China” claim a precondition for diplomatic ties — including with the U.S.

On trade, China has sought to maintain what it calls “strategic composure” as Trump escalates his threats, launching a probe of U.S. grain imports while warning against a trade war. Trump’s planned tariffs on steel and aluminum would apply to a variety of countries, not just China, which accounts for a relatively small portion of American imports. Indeed, Taiwan faces a bigger hit.

But challenging Xi on Taiwan — a central focus of his “Chinese dream” of national rejuvenation — would be another matter.

Trump’s firing of U.S. Secretary of State Rex Tillerson, a former Exxon Mobil Corp (NYSE:). chief executive officer with many years of China experience adds more uncertainty to the issue. His nominee for the role, Central Intelligence Agency Director Mike Pompeo, warned just days ago of the “Chinese threat” to American interests, although he hasn’t said much recently on Taiwan.

Read more: Xi Jinping Has Got the Power. So How Will He Use It?

Some U.S. national security hawks have long advocated greater Taiwan ties as a bulwark against China. Although Trump signaled he might try that strategy — holding an unprecedented December 2016 phone call with Taiwan’s president, Tsai Ing-wen — he later reaffirmed support for the one-China principle while seeking Xi’s cooperation on North Korea.

Now, a series of moves in Beijing, Taipei and Washington are threatening to bring the Taiwan question back to the fore. One Chinese official in Beijing said there was concern that Trump could play the “Taiwan card” and that the government was prepared to take a strong stand against any U.S. moves on the issue.

Tensions have been steadily rising since Taiwan’s 2016 election, which replaced a China-friendly government with one run by the pro-independence Democratic Progressive Party. Tsai has angered China by refusing to endorse the one-China framework while offering to sign a U.S. free-trade deal and buy more advanced American arms.

In response, China has ratcheted up pressure on Tsai, picking off Taiwan’s few remaining diplomatic allies and launching regular “encirclement patrols” with military jets around its airspace. China’s decision Sunday to remove presidential term limits gives Xi even more incentive to see through his pledge for Taiwan’s “peaceful reunification.”

Meanwhile, Taiwan’s allies in the U.S. Congress have pressed for greater support, passing legislation last month allowing for diplomatic exchanges with Taiwan “at all levels,” specifically citing “cabinet-level national security officials.” Signing the bill and holding such visits would signal whether Trump intends to test China on Taiwan. He could grant Taiwanese requests to buy advanced weapons such as Lockheed Martin Corp (NYSE:).’s F-35 fighter jets.

While such moves risk provoking a confrontation with China, Trump has shown a willingness to use available leverage in showdowns over North Korea, health care and immigration. And he’ll need to apply a lot of pressure, if he expects China to cut anywhere near $100 billion from its $375 billion trade surplus with U.S.

“Taiwan is a diplomatic card for Trump to play when he needs to annoy China,” said Cheng Yu-Chin, director of the EU-China Economics & Politics Institute in Prague. “In the future, Taiwan will suffer even more, as it gets caught in the middle between a stronger China and a inward-looking U.S.”

National security policy documents published by the Trump administration have described China as a “strategic competitor” and urged greater efforts to support allies in the Asia-Pacific region. The U.S. provides military support to the island under the Taiwan Relations Act of 1979.

A stronger line on Taiwan might also find supporters among congressional Republicans. Arkansas Senator Tom Cotton — a vocal Trump ally — has criticized China’s efforts to isolate Taiwan and said after the Taiwan Travel Act’s passage last month that “only U.S. leadership can push back against this aggression.”

China has signaled it will have little patience with the U.S. if it attempts to upgrade its relationship with Taiwan. In December, a senior Chinese diplomat in Washington warned that China would “unify” the island by military force if a U.S. warship made a port call there.

Zhou Qi, director of the Institute of American Studies at the state-run Chinese Academy of Social Sciences, said any effort to play the Taiwan card would backfire on the U.S.

“To the Chinese government, Taiwan is the primary issue in U.S.-China relations,” Zhou said. “And it can’t be used as a bargaining chip in trade talks.”