Blog - Latest News
You are here: Home / Central Banks / Too early for a preview of the RBNZ meeting? Nah …

We expect the RBNZ will leave the OCR unchanged at 1.75% at the upcoming OCR Review.

We do not expect any change in the RBNZ’s assessment of risks (numerous, but broadly balanced) and guidance on monetary policy (accommodative for a considerable period).

This OCR review is likely to be overshadowed by market perceptions around the incoming Governor Adrian Orr, and details of the new Policy Targets agreement once it’s released (possibly later next week).

We continue to expect the RBNZ will not hike the OCR until the second half of 2019. 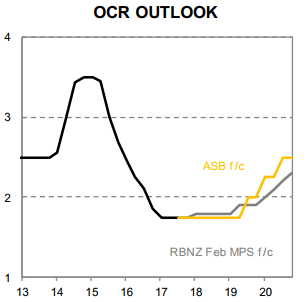 and Bank of England week …

Of course, though, most attention will be on the RBZNZ (I’m kidding) 😉