This week we released our updated quarterly forecast for the U.S. and global economy. Our outlook for the U.S. economy was revised up relative to our December forecast, as the federal budget bill passed by Congress in February adds more stimulus to an economy that is already running hot. Underlying this improved outlook is a view that domestic demand will grow more strongly, supported by fiscal stimulus. Personal income tax cuts provide a lift to disposable income growth and consumer spending, while corporate tax reform and the boost to federal spending should translate into stronger business investment.

With economic growth expected to average close to 3% over the remainder of this year, capacity pressures are expected to build. Not only should this incent firms to invest, but scarcer labor should support wage growth. Our outlook anticipates that underlying inflation in the U.S. will hit the Fed’s target of 2.0% before the end of the year, and stay slightly above target through 2019 (Chart 1). The CPI data for February supports this view, as price pressures ticked up a touch. Headline inflation rose to 2.2% y/y (+0.1 from 2.1% in January), while core inflation held at a 1.8% y/y pace.

After February’s consensus-busting job gains of 313k, we anticipate monthly job gains of 200k in upcoming months, roughly in line with its average since the Great Recession’s end. This should push the unemployment rate, which already sits at an eighteen-year low of 4.1%, even lower, reaching 3.7% by the end of 2019. Moreover, rising wages should encourage greater labor force participation enough to offset the drag from population aging.

In contrast to the very strong medium-term outlook, the outlook for the first quarter of 2018 is somewhat weaker. Retail sales in the first two months of this year have disappointed expectations, suggesting much softer consumer spending in the first quarter than the 3.8% (annualized) growth recorded at the end of 2017. We anticipate spending growth to re-accelerate in the second quarter, supported by the receipt of tax refunds, strengthening wage growth, and reduced personal income tax rates.

Booming economic activity together with building price pressures suggest that the Federal Reserve is likely to continue to raise interest rates this year and next. With three rate hikes on tap this year, the upper end of the range of the Fed’s policy rate should rise to 2.25% by year end. Moreover, better growth for 2019 suggests an additional 75bps of rate hikes, bringing the upper end of the range to 3.0% at the end of 2019.

This largely sunny outlook for the U.S. and global economy is not all blue skies. For one, higher interest rates have a tendency to expose vulnerabilities as firms and households spend more of their income on borrowing costs. While years of deleveraging have left U.S. households in good stead to handle higher rates, corporate debt has outpaced GDP growth in recent years. Lastly, the U.S. administration’s imposition of steel and aluminum tariffs and rumored forthcoming broad action against Chinese imports is a sign that global trade disruptions are more likely than previously appreciated (Chart 2). 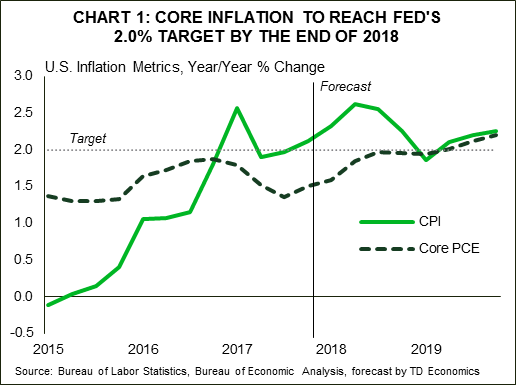 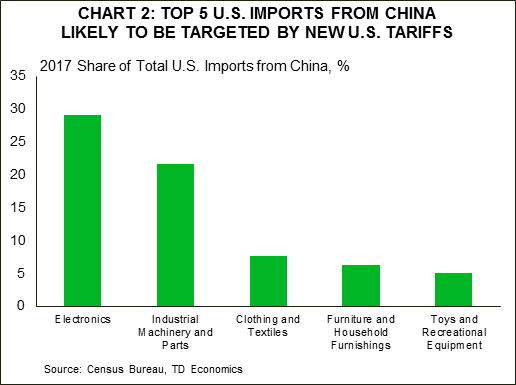 Soft economic data and a dovish tone from the Bank of Canada governor sent the loonie tumbling to 76 US cents this week, reaching its lowest level since mid-2017. Equity markets fared a bit better, with the S&P/TSX managing to eke out a gain on the week.

On the data front, existing home sales fell 6.5% in February, marking the second consecutive monthly decline and hitting a level of sales not seen in five years. While certainly a weak performance, some give back was expected following the surge in activity that took place late last year as buyers rushed to close deals ahead of the implementation of the new B20 rules. The worst is likely in the rear view mirror, but regions like B.C. and Ontario could see further pressure given these markets are particularly sensitive to the tightening in regulatory conditions – with another round of regulation introduced in the B.C. budget last month. On the whole, sales are expected to be soft in the near term, before finding support late in the year.

Indeed, our updated Quarterly Economic Forecast highlights the fact that housing fundamentals remain broadly constructive, with income gains having outpaced the rise in borrowing costs – a trend that is expected to continue as the housing market cools. That said, the near term weakness will lead to a contraction in residential investment this year, weighing on overall economic growth. Exports too, are likely to be soft, with manufacturing and exports starting the year off on a back-foot, leading net trade to be a drag on growth this year as well. As such, we have downgraded our outlook for real GDP growth to 2.0% in 2018 (previously 2.4%).

For the Bank of Canada, there are some push-pull forces that it must consider in setting monetary policy. While economic growth appears to have lost some momentum, the domestic economy remains healthy. Low unemployment will support consumer spending with robust demand materializing in a pick-up in business investment. Taken together, this should push core inflation up to the Bank’s 2% target in the coming months, suggesting a bias towards higher rates. At the same time, rising interest rates in the U.S. are expected to generate an implicit tightening north of the border through higher long-term bond yields, thus requiring less urgency for rate hikes in Canada. Moreover, a number of uncertainties cloud the outlook and could push the Canadian economy off this more sustainable growth path.

While Canada has escaped the steel and aluminum tariffs recently announced by the Trump Administration (for now), NAFTA negotiations are ongoing with an outcome still quite uncertain. Moreover, household debt levels remain elevated. Data out this week showed that the household debt-to-income ratio held relatively steady at 170.4% in the fourth quarter of 2017. Moreover, the full impact of housing market regulations, which could alter the outlook in either direction, remains to be seen.

As such, it makes sense for the Bank of Canada to take a cautious approach as it removes stimulus. In a speech this week, Governor Poloz made it clear that accommodative monetary policy is not going away anytime soon. All told, we remain of the view that a gradual pace of hikes is in store, with the next unlikely to come before mid-year. 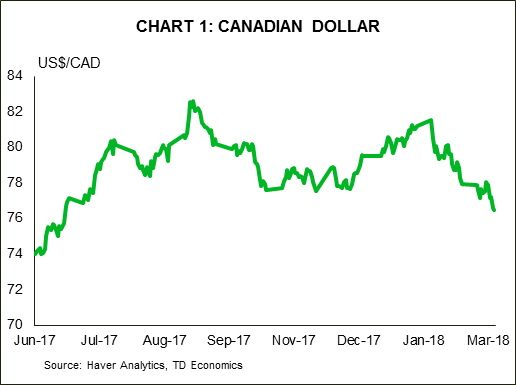 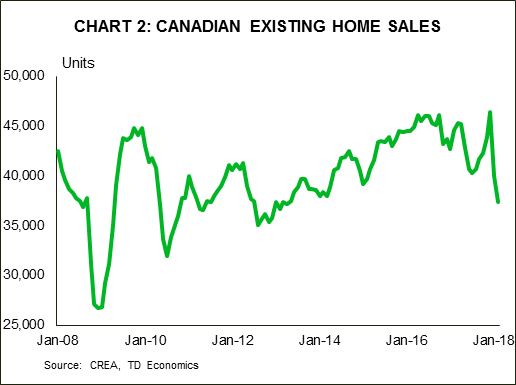 We expect headline CPI to reach its target rate of 2.0% y/y, reflecting a 0.4% m/m gain on the month (flat when seasonally adjusted). Energy prices were flat on balance, with lower gasoline prices offset by a likely sharp increase in natural gas. Food price growth should moderate, led by the food-away-from-home category which jumped in January on the Ontario wage hike. Elsewhere, the story is the same, with shelter prices reflecting more modest new home price pressures offset by rising mortgage interest costs. CAD exchange rate movements are relatively benign with USDCAD little changed in February after reversing much of its weakness in January. Exclusion-based core measures (ex food and energy, CPIX) should move marginally higher while core inflation may continue to respond to the past absorption in labour market slack and move higher. Looking ahead, we expect headline inflation to hover just above 2%. 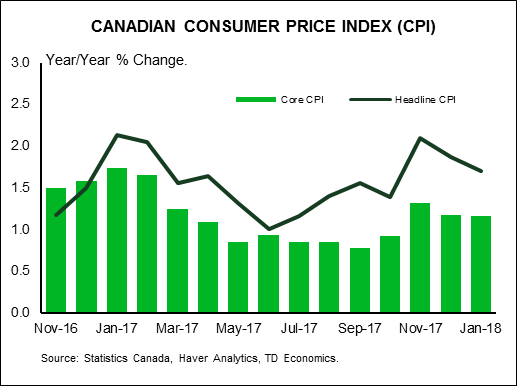 Retail sales are forecast to rise by 1.1% m/m in January, led by auto sales and a rebound in the core. December was one of the worst months on record for ex autos and gasoline sales and we expect some reversal. While we expect autos to support the monthly print, our forecast is consistent with motor vehicle sales decelerating on a y/y basis after averaging 9% y/y in 2017. Gasoline station receipts should also make a positive contribution on higher prices. However, higher prices for consumer goods as a whole will weigh on real retail sales, which should come in near 0.8% m/m and help anchor consumer spending for Q1 at 2.8%, significantly lower than the 3.5% average in 2017. 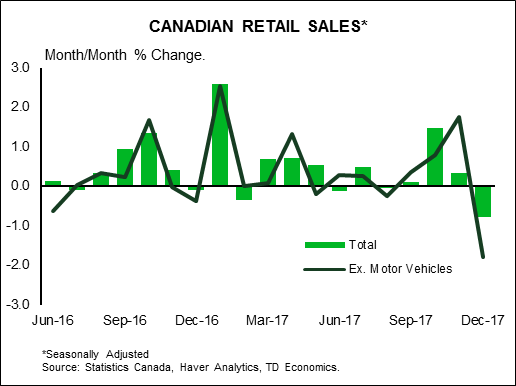