Despite good news on the U.S. economy, the announcement of potential tariffs on Chinese imports dented sentiment and took equities sharply lower on the week. Over the past three months, markets have swung from euphoria over tax cuts, to the protectionism pits, as the White House followed up the announcement of forthcoming steel and aluminum tariffs with a 25% tariff on up to $50 billion in Chinese imports.

As expected, China has announced how it would retaliate, with 15% tariff on U.S. imports of steel pipes, fruit, wine and other products, and 25% on pork and recycled aluminum, all in targeting about $3 billion in U.S. goods. The relatively modest size of the planned retaliation suggests China is willing to pursue dialogue with the U.S. to address trade disputes about the continuous violation of intellectual property rights of U.S. firms that operate in China. It’s not clear when or even if the announced tariffs will come into effect. We have already seen the U.S. walk back the scope of recently announced steel and aluminum tariffs, by exempting more countries, suggesting that this week’s announcement is an opening gambit.

The U.S. does have a leg to stand on, when it comes to China’s trade practices. However, even a just war has collateral damage. Many U.S. companies will be hurt if these tariffs come to pass, even if the actions are short-lived. This localized damage, however, would not deal a body blow to the over $19 trillion U.S. economy, which looks set to grow quite strongly over the next two years.

However, as demonstrated by markets this week, it is the indirect effects of a more adversarial global trade environment and the uncertainty it breeds that could hamper investment and trigger volatility on financial markets. And it is unfortunate that these threats come just as growth in global trade flows has accelerated (see Chart 1).

Now, about that good news. The FOMC hiked rates 25 basis points as expected, but more importantly, it an upgraded its economic outlook. Real GDP growth was lifted 0.2 percentage points in 2018, and 0.3 percentage points in 2019, and the unemployment rate now troughs at 3.6% in 2019, down from 3.9% previously. Core PCE inflation is also now expected to rise a hair above 2% in 2019. A modest inflation overshoot following nearly a decade of below target readings should not come as a terrible surprise. But, it speaks volumes to the bias of the FOMC not to push too hard or too soon against the rising fiscal tide.

That bias was demonstrated in just one additional hike by the end of 2019 as a result of its upgraded outlook. This forecast is consistent with our own view. That said, seven of 15 FOMC members now have four hikes penciled in for 2018, up from four in December, suggesting that it won’t take much to tip the number of hikes expected in 2018 from three to four. For now though, the Fed doesn’t look keen to get too far in front of the expected pickup in economic growth, but is happy to make sure its outlook is realized before increasing the speed of rate hikes. Given the risk that too much fiscal stimulus in a hot economy could result in the Fed raising rates too quickly, and contributing to a recession, this cautious approach is reassuring. 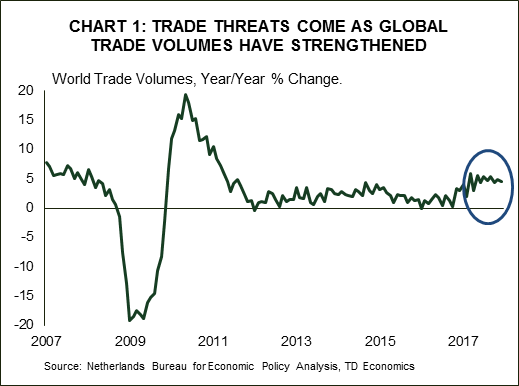 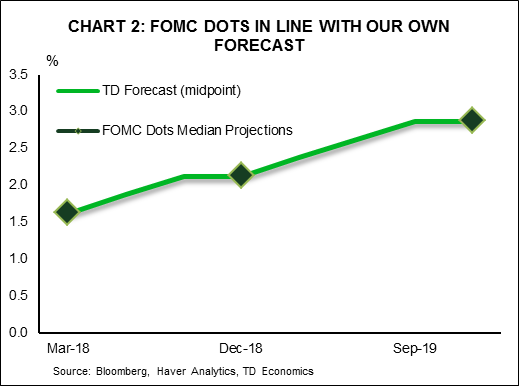 It was an eventful week for Canadian financial markets, which were shaken and stirred by gyrating oil prices and more import tariffs announced by our neighbours to the south. The TSX began the week in the red, although negative sentiment on equities reversed course midweek, as stronger oil prices boosted energy shares. However, these gains were quickly erased by week’s end, with investors spooked by the U.S. government announcing a 25% tariff on up to $50 billion in Chinese imports and China responding with its own tariffs on various U.S. products. For its part, the Canadian dollar was able to gain some ground, supported by higher oil prices and hotter-than-expected inflation data. The latter report also helped lift bond yields across the curve.

With respect to the newly announced tariffs by the U.S. and China, our preliminary take is that the direct economic impact on both countries is likely to be small, given past efforts on the part of China to diversify away from exports, and that products targeted by the U.S. comprise a small share of overall imports. This would accordingly imply muted impacts for Canada. However, indirect impacts could be larger, given the dependence of U.S. supply chains on Chinese goods. Moreover, considerable uncertainty still exists on this front, with the exact list of products targeted by the U.S. still unknown at this time and the potential for follow up actions by both the U.S. and China a realistic risk. This uncertainty could continue to drive financial market volatility, weighing on Canadian growth.

There was also some constructive news on the trade front this week, with optimism returning to NAFTA talks after the U.S. reportedly dropped its demand for at least 50% U.S. content on autos built in Canada and Mexico. However, President Trump threw cold water on negotiations, threatening to impose steel and aluminum tariffs on Canada and Mexico by May 1st, should talks not progress to his liking.

On the data front, retail spending edged up a subdued 0.3% in January, weighed down by softer sales at motor vehicles and parts dealers. Volumes were up a similarly modest 0.1%, a disappointing result on the heels of December’s weak showing (Chart 1). The soft spending print joins the mix of indicators for January signaling a modest start to the year for the economy, with first quarter GDP tracking a below-potential 1.4% (annualized) gain.

While indicators of activity are gearing down, price pressures are heating up, with a consumer price inflation accelerating to a 2.2% year-over-year pace in February on broad-based gains, thus moving slightly above the Bank of Canada’s target. More importantly, core inflation also drifted higher, with the average of the Bank of Canada’s three measures breaching 2% for the first time since 2016 (Chart 2). The firming in core inflation should raise some eyebrows at the Bank of Canada, but a soft start to the year for growth amid elevated trade uncertainties argues for continued near-term caution on the part of the Bank, with the next hike likely to be delivered during the summer. 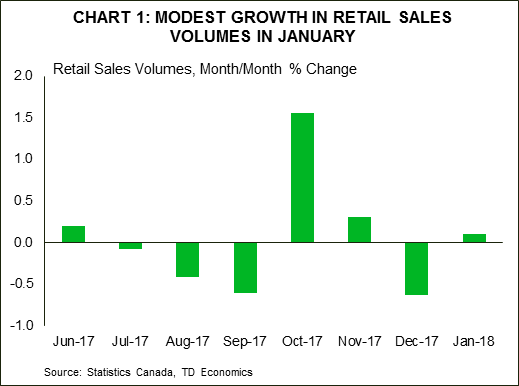 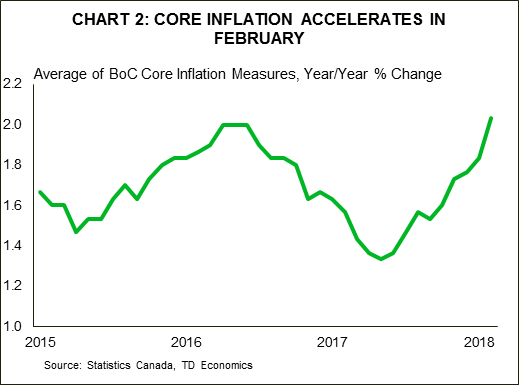 We look for headline PCE inflation to be stable at 1.7% y/y in February, reflecting a 0.1% m/m increase. In line with the CPI report, energy prices should be neutral with food prices a modest negative on a m/m basis. We expect a 0.2% m/m print in the core PCE, leaving the core inflation rate stable at 1.5% y/y. While there is risk for a 0.1% rise, we see scope for another solid increase in the healthcare services component, underpinning a third consecutive 0.2% print. Looking ahead, the report provides solid footing for core PCE inflation to pick up smartly to 1.8% in March due to base effects.

Nominal PCE (personal spending) should rise 0.3% in February, implying a 0.2% increase in real spending. That translates to a still sub-2% advance in real consumer spending for Q1. We expect February gains to be driven by services and nondurables, with a neutral contribution from durables spending. We also expect a stronger 0.4% increase in February personal incomes, supportive of a pickup in spending in the months ahead. 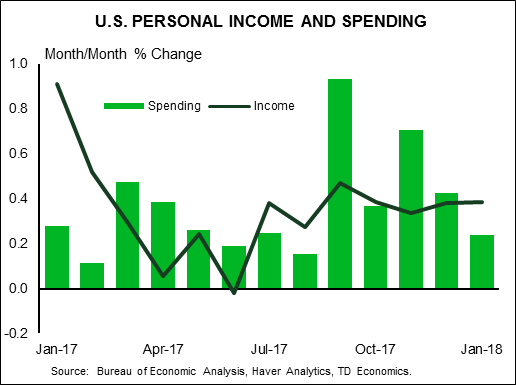 GDP growth should maintain a muted 0.1% m/m pace in January as transitory headwinds weigh on both goods and services. Disruptions to auto production will once again constrain goods sector output while new mortgage rules and the resulting slowdown in home sales will weigh on services. Food services could be another source of weakness due to the Ontario minimum wage hike. Elsewhere, we expect a broad increase in activity to support monthly GDP. A 0.1% print would leave Q1 GDP tracking in the mid-1% range, well below the Bank of Canada’s projected 2.5%. This would extend a period of near-trend growth to three quarters after a robust 17H1 and weaken the case for slamming on the brakes with three rate hikes in 2018. 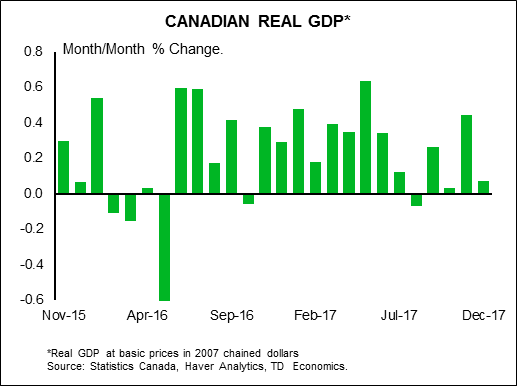