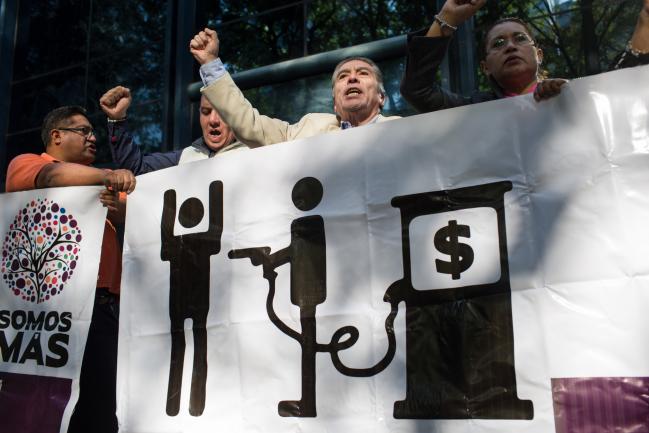 © Bloomberg. Demonstrators protest against the government’s gasoline price hike in front of the office for Mexico’s Attorney General in Mexico City, Mexico, on Friday, Jan. 6, 2016. In a conference Wednesday, President Enrique Pena Nieto said he understood public outrage over the gas-price hike, but that it was a necessary move to reflect higher global prices. Photographer: Brett Gundlock/Bloomberg via Getty Images

(Bloomberg View) — In the U.S., gasoline prices are down 33 percent over the past six years. In Mexico, they’ve gone up 64 percent (in pesos) over the same period. With a once-in-every-six-years presidential election coming up on July 1, this has understandably become a big campaign issue in Mexico.

Left-populist candidate Andrés Manuel López Obrador has pledged to freeze fuel prices for three years, and he currently has the support of 47.3 percent of voters in the Mexico Bloomberg Poll Tracker, compared to 26.8 percent for second-place Ricardo Anaya of the center-right PAN party. José Antonio Meade of the currently governing PRI party, who as finance minister from September 2016 to November 2017 took most of the heat for the “gasolinazo” price bump of January 2017 (more on that in a moment), is in third place at 18.5 percent.

Offering any political analysis beyond the poll numbers above is probably not a good idea for a first-time visitor to Mexico City who has a limited command of Spanish (me), but I do think I am equipped to explore the question of why net-oil-exporter Mexico has higher retail gas prices than the U.S.

Because I’ve converted everything into dollars here, some of the movements in Mexico’s chart line are due to currency fluctuations. The sharp increase shown for Mexican gasoline prices this year, for example, has been driven as much by the strength of the peso as by price increases at the pump, while the sharp decline in late 2008 was driven entirely by the peso’s fall against the dollar. Still, the overall picture is pretty clear: Mexican gasoline prices have usually been higher than U.S. gasoline prices, but also less volatile.

This is because, until the January 2017 gasolinazo mentioned above, gasoline prices here were controlled by the government. Unlike their counterparts in oil-rich Venezuela or Saudi Arabia, though, Mexican officials generally didn’t use their price-setting power to deliver huge discounts to consumers. Instead, they effectively taxed gasoline use when world oil prices were low and subsidized it when prices were high:

There’s pretty widespread agreement that gasoline subsidies are bad economic policy. They fill the pockets of the affluent more than the poor, and they encourage fossil-fuel overuse. The data in the above chart is from an Organization for Economic Cooperation and Development “peer review” intended to encourage Mexico to reduce its fossil-fuel subsidies. But while the country continues to subsidize electricity (which is now generated, as in the U.S., chiefly by burning ), its gasoline and diesel subsidies actually added up to less than zero over past two decades.

Mexico’s gasoline price controls seem, then, to have been less a way of buying off the citizenry than part of a broader policy of managing petroleum production and consumption through the government-owned oil monopoly, Petroleos Mexicanos (aka Pemex), rather than letting market forces reign. Mexico nationalized its oil industry and kicked out foreign oil companies in 1938, and control of petroleum resources and disdain for the Exxon Mobils and Royal Dutch Shells of the world remained a key national policy for 75 years.This finally changed in 2013, when the government of President Enrique Peña Nieto, who leaves office in December, ended Pemex’s monopoly over Mexico’s oil reserves and opened up bidding for new offshore leases to foreign companies. Deregulation of the domestic fuel market — with BP (LON:), Exxon Mobil (NYSE:), Shell (LON:) and Total service stations now popping up around the country — followed. All this has coincided with a rise in gasoline prices, so it’s understandable that some Mexicans look back nostalgically to the Pemex monopoly. But something else happened over the past 15 years to make maintaining the old system ever more difficult. Mexican oil production started declining, while domestic fuel consumption rose:

The drop can be attributed mainly to the supergiant Cantarell Field, named for the fisherman who in the 1960s noticed oil burbling to the surface of the Bay of Campeche off Mexico’s southeastern coast, where production has fallen from 2.2 million barrels a day in December 2003 to just 165,255 barrels a day this February. Pemex hasn’t found anything else like it, and while the Mexican government is hoping that foreign oil companies with more money and more advanced technical capabilities will have better luck, there’s no guarantee they’ll strike another Cantarell. And so Mexico has gone from major oil exporter and minor oil user to a country that ranks 12th in the world in oil production and 11th in consumption, meaning that it probably no longer has the leeway to go its own way on energy policy.

Meanwhile, the shale boom in neighboring Texas has upended Mexico’s oil import-export relationship with the U.S.:

Most of these imports from the U.S. are in the form of already refined gasoline, while Pemex’s refineries in Mexico have been running well below capacity. There are a number of reasons for this, among them that Pemex is now trying to run its refineries at a profit rather than just taking whatever oil comes their way, so much of the heavy crude that Mexican fields produce is being exported unrefined. The upshot is that Mexicans are increasingly fueling their cars with U.S.-made gasoline and paying more for the privilege than Americans do. That is understandably unpopular!The price gap is mainly the result of taxes: Mexico’s effective tax rates on diesel and gasoline use remain among the lowest in the OECD, the club of the world’s affluent democracies, but they’re now several times higher than the super-low U.S. average. U.S. gas taxes vary a lot from state to state, of course, which helps explain why the cross-border price-per-gallon differential between San Diego and Tijuana is 30 to 40 U.S. cents, according to GasBuddy.com and the Mexican government, while between El Paso and Ciudad Juarez, it’s almost $1.20. Beyond that, the prices are set not quite by market forces — Pemex is still too dominant for that — but by a formula that takes a smoothed moving average of Texas prices and adds in transport and other costs.

Among the turn-back-the-clock remedies López Obrador has offered for high fuel prices are freezing those prices, reducing oil exports and ramping up domestic refining capacity. A less expensive and disruptive response would probably be just to cut fuel taxes; businessman Alfonso Romo, a top López Obrador adviser, said in a radio interview Thursday that this was what his candidate really had in mind, while rival Anaya has proposed a narrower tax cut targeted at the states along the U.S. border.

One problem with cutting gasoline and diesel taxes, though, is that they have been filling the government budget hole left by declining oil production. Which leads me to another proposal: Maybe we Yankees could help out by, say, enacting a carbon tax to shrink our burgeoning federal deficit. That wouldn’t necessarily reduce gasoline prices in Mexico, but at least it would chip away at that maddening price differential.

A club that Mexico made it into in 1994 by the skin of its teeth.

It might a little, given that it would presumably reduce fuel demand in the country that is the world’s biggest consumer of oil.

France Says West Should Engage With China on Trade, Not Provoke