Blog - Latest News
You are here: Home / Central Banks / The dot plot isn’t the most-important forecast; this is

The number of people working is the best predictor of… everything

One of the most disingenuous episodes in recent Federal Reserve history is the post-facto justification of the unemployment rate.

For the past few years, many Federal Reserve have said the US was near full employment because demographics, not discouraged workers were behind the fall in labor force participation. That proved to be wrong as people continue to return to the workforce.

The x-factor in their predictions and in every unemployment rate forecast is the participation rate — what portion of the people in a country are working, or looking for work. That is a critical input in an economy and its long-term trend tells more about the economic history of the US than anything else.

The era from the late-1960s through the 1990s is a perfect storm. You had the baby boomers coming of age along with the entrance of women into the work force. It was a dream scenario for growth.

Women entering the workforce have now plateaued (although Poloz might argue that) and baby boomers are aging, which will take many out of the workforce.

Where it gets complicated is what happens in 2009 during the crisis. The big question is: How much of the drop to 63.0% from 66.0% is due to aging? And how much is due to people giving up working.

In 2013, Fed officials began to argue that the participation slightly below 63% was the new normal and that few workers were choosing to stay home. Instead, they were retiring.

I argued against it but what was so frustrating about it was that Fed officials couldn’t point to their forecasts about the participation rate. If it was simple demographics and aging, it should have been the simple to predict.

Yet Fed officials couldn’t point to any forecasts. Instead, in hindsight they justified it. It’s like an analyst coming out and saying it was obvious that you should have bought NFLX, AMZN and Bitcoin two years ago. Where were you at the time?

Two years ago, Dallas Fed President Kaplan finally stepped up and put out a rough forecast, saying he sees the participation rate under 61% in 2024. 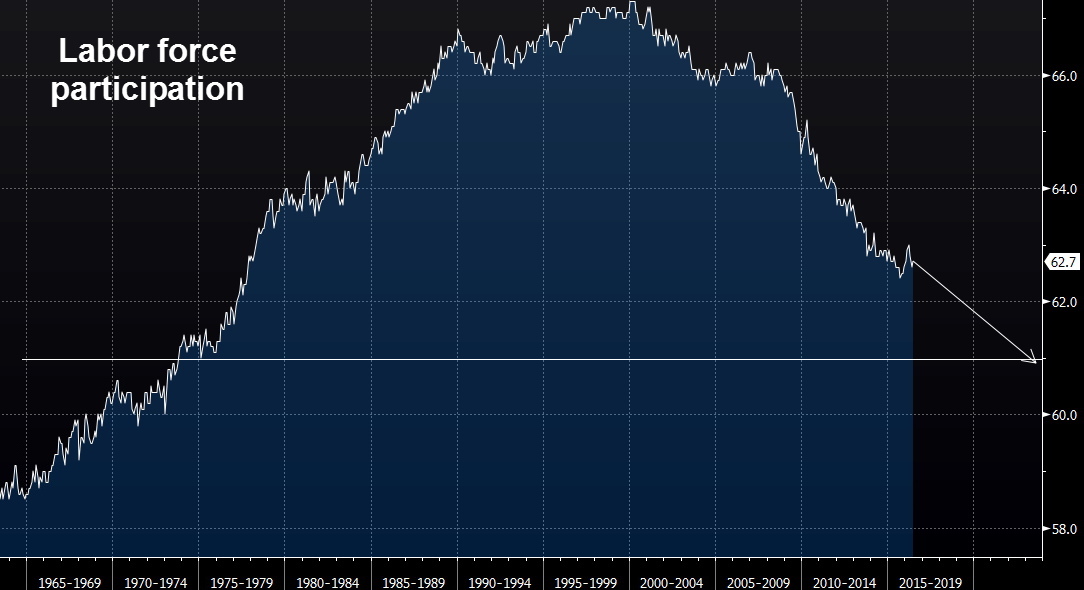 What’s insane is that there is still no official Fed forecast for the participation rate. Given that it’s one of the easiest things to credibly forecast, and that it’s probably the best predictor of growth, that’s baffling.

In its absence, we have the Congressional Budget Office who has put out a very detailed forecast for participation.

The CBO has this interesting tidbit:

Another conclusion they draw is that the number of people receiving disability benefits will continue to rise. That’s another very interesting topic of debate. One line of thinking is that the opioid epidemic and the ridiculous cost of health insurance is pushing people towards disability status. However, lately, the number of disabled people in the 25-54-year old cohort has fallen substantially.

Now, the CBO also estimates that discouraged workers who may return are just 0.4 pp of the participation rate, meaning that the US now truly is close to full employment. 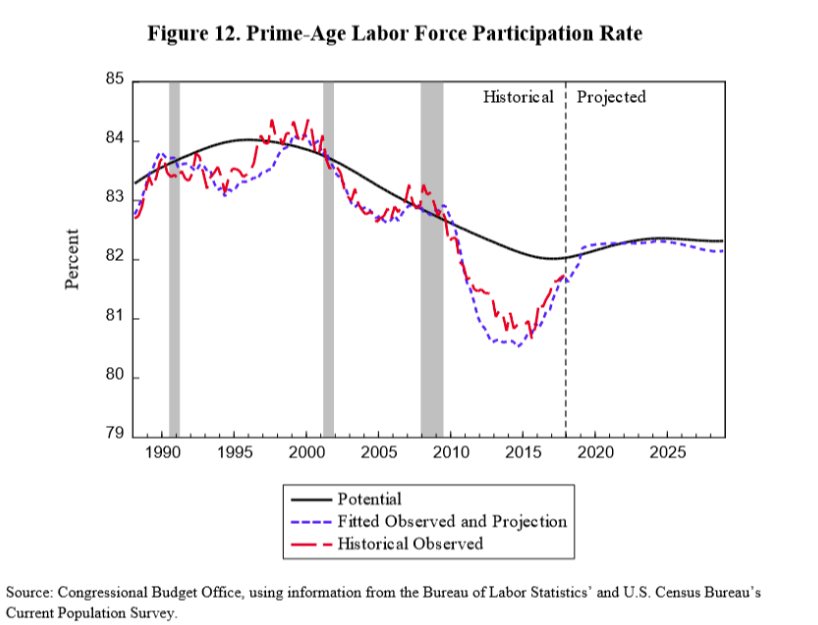 All this to say: The CBO’s job is generally to forecast deficits and the Fed’s job is to forecast the economy. Yet it’s the CBO that’s doing much more valuable work on the participation rate. The Fed needs to catch up.

Finally, we hear so many Fed members weigh in on fiscal policy and wasting their breath on things they can’t impact. Instead, I would love to see someone influential from the Federal Reserve begin to champion ways to improve participation (women, maternity benefits, child care, ex-cons, seniors, youth, students, wages, healthcare, guaranteed income, taxes). It’s an area where they could do valuable work.