Blog - Latest News
You are here: Home / latest_news / Team BOJ Is Back in Business While Government Sinks in Scandal 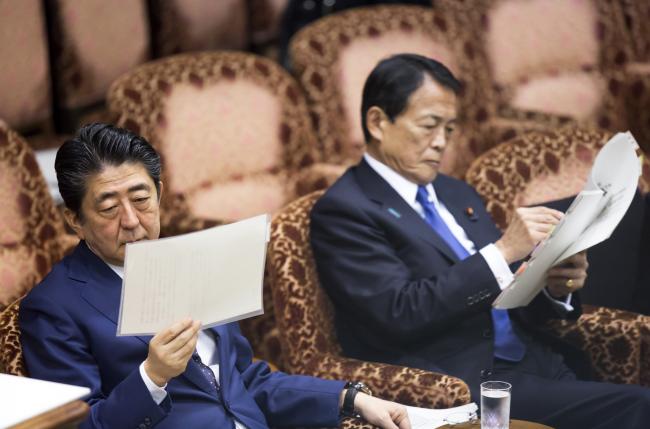 (Bloomberg) — Japan’s dependence on the central bank to drive economic policy was on show again on Friday as parliament moved to lock in Governor Haruhiko Kuroda to another five-year term as a land scandal undermined the nation’s political leaders.

While analysts are divided on whether the Prime Minister Shinzo Abe and Finance Minister Taro Aso will hang onto their jobs this year, there’s no doubt their focus will be diverted away from the government’s already flagging economic agenda.

“You’re going to have Kuroda in place whatever happens,” said Jun Okumura, a visiting scholar at the Meiji Institute of Global Affairs. “That you don’t have to worry about.” As for the prime minister: “Legislative agenda is probably the last thing that’s on his mind right now.”

As parliament’s upper house this morning quickly confirmed Kuroda’s appointment, and that of his new deputies Masayoshi Amamiya and Masazumi Wakatabe, lawmakers continued their focus on the controversial land deal linked to Abe and the finance ministry’s tampering with associated documents.

Read more: Testimony on policy from the BOJ’s three chiefs.

The lower house is scheduled to seal the Bank of Japan appointments with a vote early Friday afternoon.

And with that, the guardians of monetary policy will settle back into running the stimulus program that’s pushed back deflation and weakened the yen — two of the most the tangible benefits of “Abenomics” for Japanese businesses and the wider economy.

“Continuity at the BOJ is one of few good pieces of news out of Japan right now,” said Tsuyoshi Ueno, a senior economist at NLI Research Institute.