Sterling was unsettled and vulnerable on Thursday, after reports showed that Britain remains the world’s slowest growing major economy.

The Office for National Statistics confirmed that gross domestic product reached 0.4% in the final quarter of 2017, slowing from growth of 0.5% in Q3. Although the ONS revised estimates for full year growth in 2017 to 1.8% from 1.7%, this still remains the lowest growth rate since 2012. Sterling is likely to remain depressed as investors digest the GDP figures, with a strengthening Dollar fueling further downside on the GBPUSD.

Taking a look at the technical picture, GBPUSD remains under pressure on the daily charts. Sustained weakness below the 1.4100 could invite a decline towards 1.4000. 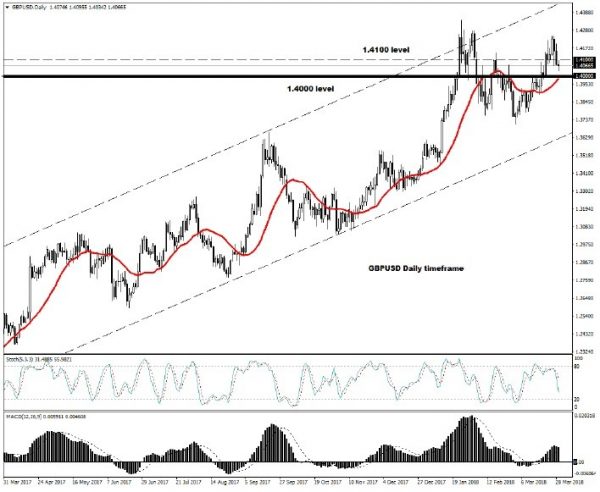 Markets mixed ahead of Easter break

Global equity markets may struggle for direction today as investors stroll to the sidelines ahead of the long Easter weekend.

Asian stock markets were mostly mixed in thin trade, as a tech-fuelled selloff on Wall Street overnight weighed on investor sentiment. Although European stocks opened slightly higher, gains could be limited as the holiday mood kicks in. With Wall Street still at the mercy of a painful selloff in the technology sector, further losses could be on the cards this afternoon. Although fears of a full blown global trade war have receded, this has been replaced with growing concerns over a regulatory crackdown on technology firms. The uncertainty and market anxiety could expose stock markets to downside risks.

The Dollar held tightly onto its gains against a basket of currencies on Thursday, after fourth quarter US GDP figures were revised up to 2.9% from 2.5% in the previous session.

This upwards revision to the fourth quarter growth boosted sentiment towards the US economy and stimulated expectations over the Federal Reserve adopting a slightly more aggressive approach on rate hikes this year. Speculation around higher rates have injected Dollar bulls with a renewed sense of confidence, elevating the Dollar against its major counterparts.

Taking a look at the technical picture, the Dollar Index is slowly building momentum on the daily charts. The candlesticks are in the process of crossing above the 20 Simple Moving Average, while the MACD is showing early signs of trading to the upside. Prices have breached above the 90.00 resistance level which could encourage an incline higher towards 90.45. Alternatively, a failure for prices to keep above 90.00 may result in a decline lower towards 89.50.

There has been a recovery in the Dollar strength against many of its different counterparts over the past 24 hours, so it is possible that the Dollar’s recovery could be a culprit behind some of the current Rand weakness. Comments from SARB Governor Lesetja Kganyago that the Rand is now ‘somewhat’ overvalued, is likely to provide a scenario where it may be difficult for the Rand to advance any further than the 4.87% it has already made year-to-date.

Focusing purely on the technical picture, an appreciating Dollar could push the USDZAR towards 11.830 in the near term.

Dollar Treads Water Ahead Of US Inflation Data
Scroll to top