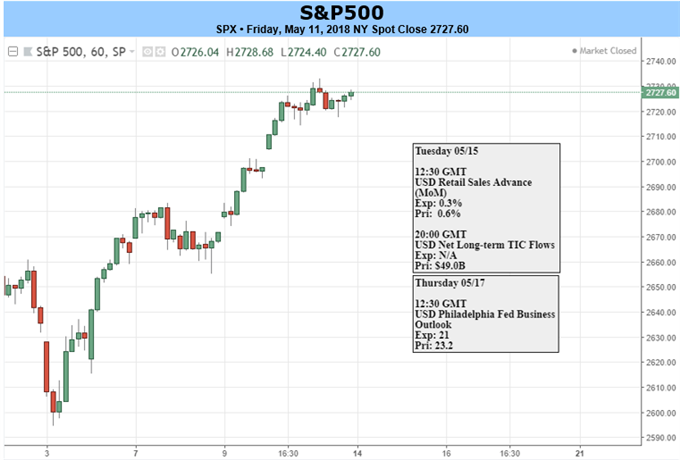 For the intermediate-term technical and fundamental outlook, check out the DailyFX Q2 Forecasts.

Next week’s economic calendar is light with no ‘high’ impact data releases scheduled. Headlines out of Washington remain for the foreseeable future a threat. General risk appetite will be a key theme to focus on as the thick of earnings season has passed.

As we discussed on Thursday, the S&P 500 was in the process of carving out a broad triangle, with its breakout direction undetermined. And while it did break higher last week, the pattern didn’t coil up enough for our tastes. This doesn’t mean the market won’t rise, but without a tighter formation the triangle lost some of its appeal. Nevertheless, the S&P is above the trend-line off the high and a swing-high created last month. This positions the market for higher prices if it can maintain above. A drop back below 2717 and the trend-line will potentially undermine the recent advance from around the 200-day and February 2016 trend-line.

Next week we have German and Eurozone GDP and ZEW surveys due out on Tuesday, but beyond that there aren’t any significant data points on the economic calendar. Risk trends and the euro (trading with a strong one-month inverse correlation of -84%) will be in focus.

Last week, the DAX inched above a resistance zone just under the 13k mark. It’s an area now under consideration as support given the breach, but should it fail then we may see it turn back into a zone of resistance again. This will take some time to see if it develops, but a broad head-and-shoulders top could still be in the works with a turn down soon. For more on this possibility you can check out the DAX commentary from last week. For now, it’s a tough spot tactically as the market is extended but not yet showing weakness needed to become a compelling short. We’ll stand aside until better clarity is gained.

Check out this guide for 4 ideas on how to Build Confidence in Trading. 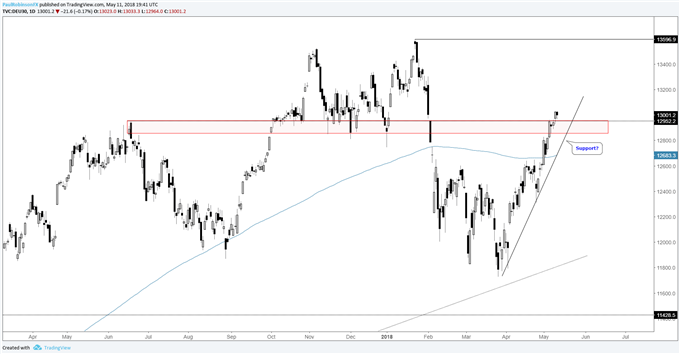 The BoE held on rates last week and gave sterling a push lower, which helped bolster the FTSE higher. The one-month correlation between GBP and the FTSE is at a whopping -94%, so traders will want to take into consideration currency impact both from a directional standpoint and with regards to account risk management when trading the two markets together.

Thanks to the help of the pound, the FTSE has been the surprise to the top-side as the rally off the March low continues to blast through levels with little trouble. The big level standing in the way at this juncture is the record high just shy of 7800. It seems probable given how extended the market is, a first visit of major resistance will find difficulty in breaking on through.