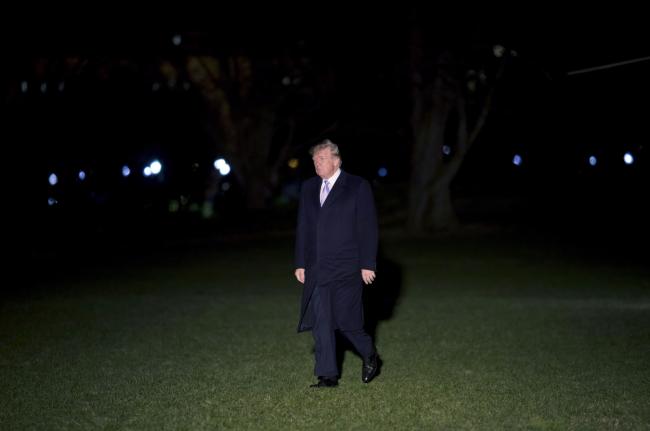 (Bloomberg) — South Korea had a muted reaction after President Donald Trump hinted the administration might roll back military support for its longtime ally, a threat that came as the two sides seek to overhaul their trade deal while also disarming Kim Jong Un.

“We have a very big trade deficit with them, and we protect them,” Trump said Wednesday, according to an audio recording of a speech he delivered to donors in Missouri, which was obtained by the Washington Post. “We lose money on trade, and we lose money on the military. We have right now 32,000 soldiers on the border between North and South Korea. Let’s see what happens.”

In a text message Friday, South Korean President Moon Jae-in’s office said there was “no need to comment on what a foreign state leader says every time. We don’t have anything to say regarding this.”

Trump’s remarks on South Korea were part of a 30-minute speech in which he criticized several top trading partners — including other U.S. allies like Canada and Japan — of unfair trade practices. His linkage of trade talks to military support on the Korean peninsula comes as he prepares to meet with North Korean leader Kim, a potentially historic encounter brokered by the South Koreans.

“Our allies care about themselves,” Trump said. “They don’t care about us.”

Responding to reports about Trump’s remarks, the Pentagon said Thursday the U.S. relationship with South Korea is the “strongest it’s ever been.” Trump has repeatedly threatened military force against North Korea, if it continues to seek a nuclear-tipped missile capable of striking the U.S. homeland.

“There’s no space between Washington and Seoul, and so we’ll continue to support them and work together,” spokeswoman Dana White told reporters in Washington.

Admiral Harry Harris — the top U.S. military commander in Pacific and Trump’s pick for ambassador to Australia — said Thursday he thought Kim would “be a happy man” if the U.S. withdrew its troops from South Korea. “I believe he would do a victory dance,” Harris told the Senate Armed Services Committee.

Negotiators from the U.S. and South Korea met Thursday in Washington for the third round of discussions to revise their trade accord, known as Korus. Trump has threatened to kill the deal if they can’t agree on ways to reduce the U.S. trade deficit with South Korea. The U.S. goods trade gap narrowed to $23 billion last year to the smallest since 2013.

Relations between the two allies have been difficult since Trump came to power. South Korea has said it would use all “possible means” to respond to the new U.S. steel tariffs of 25 percent. The third-largest steel exporter to the U.S. is asking for an exemption, which the U.S. says it may offer to nations that trade fairly and are military allies.

“This threat raises concern for South Korea on both the security and the economic side of the relationship,” said Troy Stangarone, senior director of congressional affairs and trade at the Korea Economic Institute of America in Washington. “I’m not sure that this actually helps achieve U.S. objectives, because no government can ultimately be seen as negotiating with a gun to its head.”

The threat “in the end creates policy confusion and uncertainty,” as it tells North Korea there are divisions to exploit between the U.S. and South Korea, Stangarone said.

At the first round of Korus trade talks in January, the U.S. presented proposals to improve auto exports and lift trade barriers, while Korea raised issues with the investor-state dispute settlement clause and trade remedies, according to the negotiators.

The U.S. has complained about a rule that limits the sale of American cars that don’t meet Korean safety standards.