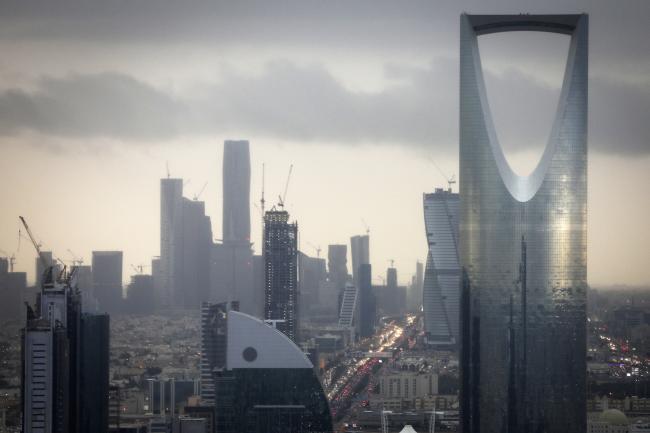 © Bloomberg. The Kingdom Tower, operated by Kingdom Holding Co., right, stands on the skyline above the King Fahd highway in Riyadh, Saudi Arabia.

(Bloomberg) — Saudi Arabia won classification as an emerging market by a major index compiler for the first time, a key step toward the kingdom’s goal of attracting billions in additional stock investor inflows.

Russell said the Middle Eastern country will be included in its secondary emerging markets grouping effective March 2019, according to a statement on March 28, 2018. Saudi Arabia joins a category that already includes China, Russia and India. The kingdom will have a 2.7 percent weighting in the compiler’s main emerging market stock benchmark, FTSE said.

“Saudi Arabia is to be congratulated on the pace of the recent market reforms,” said Mark Makepeace, FTSE Russell’s chief executive officer.

FTSE’s decision is one of two watershed index announcements the kingdom’s regulators — and the markets — are awaiting. MSCI Inc. is expected to announce its decision in June.

The announcement will be welcomed by Saudi Crown Prince Mohammed Bin Salman, who is in the U.S. on a tour that includes stops in Washington and New York. He has been spearheading a plan aimed at transforming the nation’s economy, including turning its almost $500 billion stock market into a gateway for foreign investment. Investors are also awaiting what could be the biggest initial public offering ever, that of state-owned Saudi Arabian Oil Co.

Some potential investors have stayed away from the Saudi stock market, reflecting disquiet at political upheaval that culminated late last year in the detention of dozens of princes and members of the business elite in what the crown prince said was a crackdown on corruption. Sentiment appears to be improving, according to senior Saudi officials.

Sarah Al-Suhaimi, the chairwoman of the Riyadh bourse, known as the Tadawul, said in an interview in New York before the announcement that conversations with investors have been positive, and that the FTSE inclusion could draw about $3 billion of investments to the kingdom. She is “equally optimistic” regarding MSCI’s decision, Al-Suhaimi said.

Expectations that the biggest economy in the Middle East would earn the status upgrade have helped boost its main stock gauge. The Tadawul All Share Index has climbed almost 10 percent this year, An exchange-traded fund focused on Saudi stocks has advanced almost 9 percent in March.

The emerging-markets designation by FTSE could prompt inflows of about $5 billion from passive investors tracking the index, according to estimates by Mohamad Al Hajj, an equities strategist at the research arm of EFG-Hermes Holding. If MSCI follows suit in June, a further $10 billion could pour into Saudi stocks.

There are some skeptics. A surge of inflows tied to inclusion in emerging-market indexes will soon sputter out, Jason Tuvey at Capital Economics wrote in a note today. Qatar and United Arab Emirates stocks soared in anticipation of EM index inclusion in 2014, then fell soon after, he wrote.

Still, with potential MSCI inclusion still lying ahead for Saudi Arabia, further upside for stocks is possible, said Muhammad Faisal Potrik, head of research at Riyad Capital in the Saudi capital. Even so, his year-end forecast for the Saudi benchmark equity gauge was already met this week, he said. “We would be closely tracking corporate earnings and signs justifying further price-to-earnings expansion, updating our views in due course, but would avoid jumping on the speculative bandwagon.”

Still, they represent less than 5 percent of total ownership of Saudi shares. And even before anticipated foreign inflows, stocks in Riyadh trade at more expensive valuations than their emerging markets peers: their average estimated price-to-earnings ratio was close to 14 times this week, compared with 12 times for members of the .

Chemicals and steel manufacturer Saudi Basic Industries Corp. and Al Rajhi Bank would be the companies likely to draw the strongest interest from investors abroad, according to EFG-Hermes’ Al Hajj. Here are the 10 stocks that he estimates will see the greatest inflows:

Chill Out on China, Says Australian Gatekeeper to Foreign Buyers