The S&P 500 see-sawed for much of this past week as a short-term recovery turned sharply back in line with the prevailing down trend from Wednesday. The renewed sell-off continued despite a softer dollar and lower 10-year treasury yields. The index now threatens to breach the all-important 20% decline for the January high, marking a technical bear market.

The 20% decline roughly coincides with the 2021 high around 3845 and is in serious threat of being breached heading into next week. 3860 poses the first level of (immediate) support followed by 3723. Should we see a rejection of the 20% decline, upside resistance appears at the zone of resistance at 3930 – 3950 before 4030.

Given the recent and overall bearish momentum of the S&P 500 index, it is difficult to fight the trend, especially if we are to breach that 20% mark which could become a self-fulfilling prophecy and only attract more selling pressure. 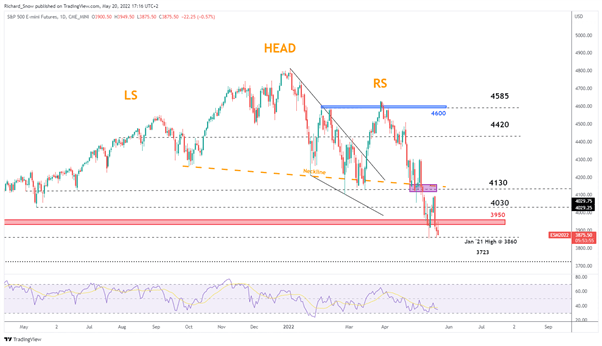 US 500 Client Positioning: Client Sentiment Bets on a Reversal

The majority of clients are attempting to call a bottom in a strong (downward) trending market. Typically, it makes more sense to trade in the direction of the trend which is why adopting a contrarian mindset to overall client sentiment is preferable under such market conditions. 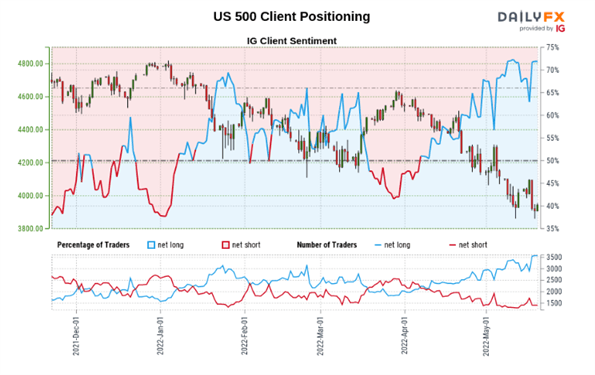 The weekly Nasdaq chart highlights the longer-term downtrend (blue channel) which is approaching a level of support. Friday provided the opportunity to mark seven straight weeks of declines and approaches a key region of the chart – the underside of the descending channel.

From here, we could see the index sell-off at a faster rate, resulting in a breakdown of the channel or we could witness the market pullback after entering oversold conditions on the weekly RSI.

Support appears in the form of the lower side of the channel while resistance lies at 12,250, a level that had previously been tested as both support and resistance. A continued move higher would warrant a closer look at the area of confluence around the channel midpoint and 13,752. 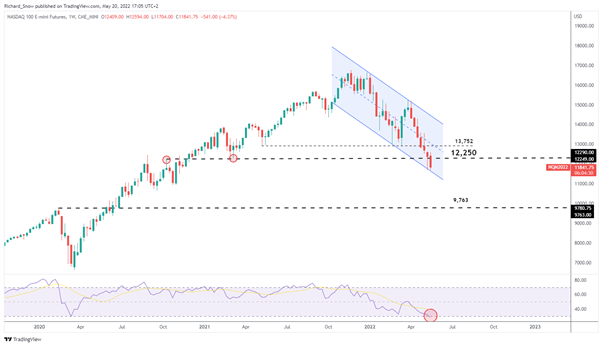 — Written by Richard Snow for DailyFX.com

Crude Oil Forecast Relegated to Volatile Range Until Either 115 or 100 Brea...