But, the Reserve Bank of New Zealand decision is due soon after the Fed

I posted up a couple of previews last week:

RBNZ will leave the OCR at 1.75%, and retain a cautiously upbeat stance

Developments since the February MPS have been, on balance, more positive … But this won’t change the RBNZ’s assessment a great deal

But at the same time, the NZD remains high, dampening activity and inflation

A broad spirit of cautiousness (particularly with regard to the inflation outlook) has underpinned the RBNZ’s assessments for some time. And we expect that to continue for some time yet.

The RBNZ is not expecting to tighten monetary policy until the second half of 2019 and we agree with that assessment.

With interest rates on hold this year, OCR decisions have taken a bit of a backseat – you might even say they are being taken for granted. Fiscal policy and potential changes to the PTA and Reserve Bank governance are instead at the fore. 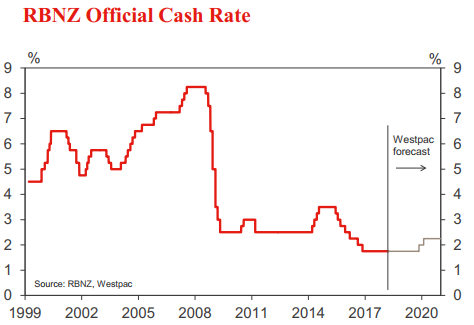 (Westpac’s assessment is little different to ANZ’s, so I’ll jump to this….)

OCR review will be the last one for Acting Governor Grant Spencer, whose term ends on 26 March.

But with some impending tweaks to the RBNZ’s targets, there’s no scope for making any commitments about the future direction of monetary policy.

Incoming Governor Adrian Orr will need to sign a new PTA before he takes up the role on 27 March. No date has been given as to when we’ll see the details of the new agreement. But it would be understandable if it was released after Thursday’s OCR review, to avoid overshadowing the rate decision itself (and to avoid any confusion as to which agreement the RBNZ is currently operating to).

The Finance Minister has said that the new PTA will reflect his desire to include employment as part of the RBNZ’s mandate. With that in mind, we could see some reference to “conducting monetary policy in a way that will best contribute to full employment”, along the lines of the Reserve Bank of Australia’s policy target. But this may only be a first draft of the employment mandate, ahead of the review of the Reserve Bank Act that is still under way.