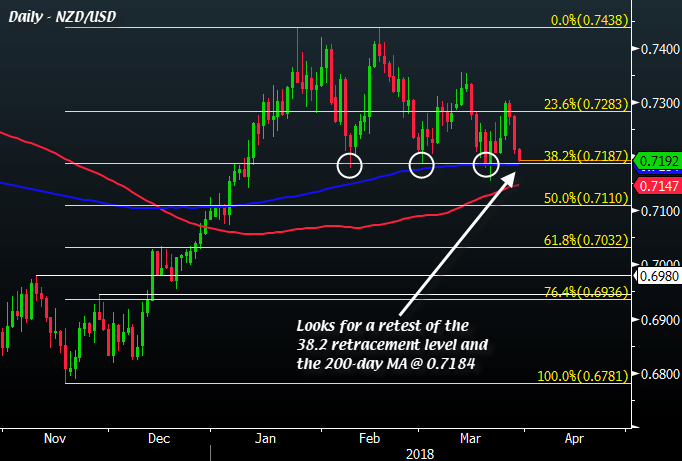 Dollar demand continues into the new day, taking down commodity currencies once again – and the kiwi is no exception to that.

NZD/USD is back down nearing a test of the 38.2 retracement level @ 0.7187 which has held on
three separate occasions already since February. The last test to the downside saw the pair also supported by the 200-day MA (blue line) and these two levels will be key once again today.

It’ll be a long weekend for kiwi (and most traders) as markets will be closed tomorrow as well as Monday (Easter weekend!) – but that is the dangerous part. In times of thin liquidity, moves can be exaggerated. But any breaks may not be that meaningful as when the majority of traders come in that’s when the real sentiment comes in.

The bigger question for the pair is more to the dollar side of the equation. Is the recent bid in the dollar this week related to quarter-end flows? Or is it part of a broader reversal in dollar sentiment that has seen the greenback suffer on the year?

I’m leaning more towards the former, but the good thing about these trades is that you can define and limit your risk based on these support levels – which are sitting close by to one another. And that’s the best kind of feeling even if you get it wrong.

Though the trend of lower highs being posted since the double-top in February is something to watch out for.

Here’s why oil prices are closer to the ceiling than they are to the ...

EURUSD trades in the middle of an up and down range. What sticks out?
Scroll to top