June is behind us and with it the first half of 2017 is officially on the books. Though global politics have provided much of the year’s drama thus far, US markets have remained relatively calm and quiet.

The , one of the most popular measures of market volatility, has remained in the low teens, ranging mostly between 10 and 12. At the same time, US indices have been rising serenely but surely. The and gained 8% on the year so far, the 14%. 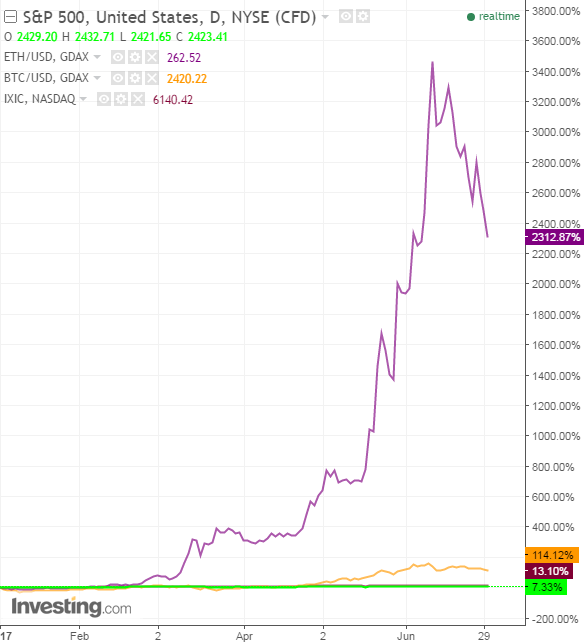 Though stocks, commodities and FX have been operating as usual, the newest arrivals to the global financial markets—cryptocurrencies—had a blow-out first half of 2017, expanding in visibility and trajectory while gaining considerably in value. Though we’re only halfway through this year, we don’t believe it’s too early to anoint 2017 the year of the cryptocurrency.

New digital currencies are sprouting like mushrooms after the rain, and while some believe this may be the sign of a bubble, it’s also a sure signal that the popularity and acceptance of cryptocurrencies has entered the mainstream.

Here’s a deeper look at equities, commodities, and currencies—crypto and otherwise—that have had notable runs during these first six months of 2017. 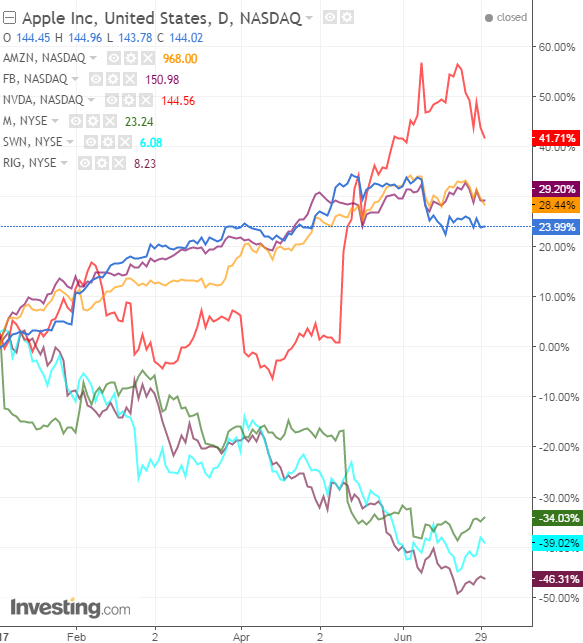 There’s a good reason why the NASDAQ outperformed the S&P 500 by 6 percent – technology companies. NVIDIA (NASDAQ:), Amazon (NASDAQ:), Facebook (NASDAQ:) and Apple (NASDAQ:) all outperformed both indices, posting between 20% and 40% gains just during the first half of 2017. The equity rally has been entirely dependent on this sector.

Indeed, without these heavyweights leading the way (since the S&P is market cap weighted), it is entirely possible we would have witnessed a stagnant or negative performance by the S&P for this time period. Though we’ve seen some weakness in the sector during the recent tech sell-off, it’s important to acknowledge that 20% gains in six months shouldn’t be taken for granted, nor considered business as usual. Apple’s iPhone 8 introduction, which markets are expecting will be available in the fall, could lead the sector higher. It’s certainly one of the most anticipated events in the second half of this year.

Plagued by low and prices, shares of most energy companies move according to their commodity counterparts. No surprise then that energy companies are 11 of the top 20 worst performers for 2017 so far, with losses between 30% and 44%.

Transocean (NYSE:) and Southwestern Energy (NYSE:) lead this list with losses of 44% each. It would take a significant and sustained upturn in energy prices, and in market sentiment, to turn them around in the second half of the year.

Bricks-and-mortar retailers have continued their downward slide since the rise of online shopping. Macy’s (NYSE:) is now down 68% from its all-time high of $73 during July 2015. Declining comparable store sales and a bleak economic outlook are to blame for the entire sector’s under-performance.

Online retailers, however, appear to be on the right side of retail’s future. Amazon and Alibaba (NYSE:) continued their ascent. Indeed, Amazon shares briefly touched $1000 earlier this past month.

Amazon’s acquisition of Whole Foods (NASDAQ:), announced in mid-June, could blur the line between traditional and online retailers, but it’s too early still to know yet how the tech giant will operate the supermarket’s physical locations. 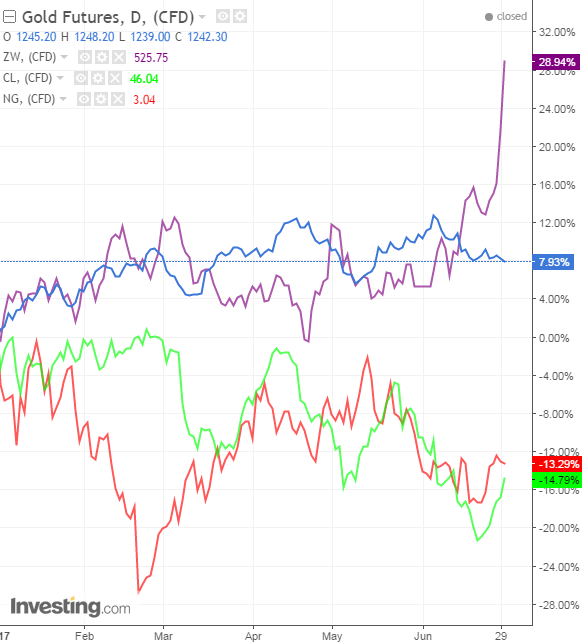 is in the midst of an historic rally. After years as a commodity under-performer, the result of a multiyear bearish trend, the agricultural commodity appears to be back from the dead. A supply crunch—brought about by the and particularly bad weather conditions in the US (snowstorms in May, a drought in the northern plains)—has propelled the grain’s price higher. It’s up 29% this year.

began the year just at the inflection point for post-election market optimism which catapulted equities higher as it pushed safe havens lower. Gold hasn’t actually had an extraordinary first six months, but it is up 8% on the year. It’s back to where it was before the election and holding the uptrend despite market optimism.

Going into the second half of the year, gold will need a catalyst to jump higher. Interest rates are on the rise and gold could struggle to reach higher without a major risk event.

Despite the rally in prices over the last week and a half, a drop of 14% in prices of Crude and have earned oil its tag as an under-performer so far this year. Of course, starting the year at a 52-week high didn’t help the commodity’s YTD performance, but US shale production is bringing oil prices down, despite OPEC’s best efforts to make a show of (and in some cases actually deliver) production cuts. The next stop on the OPEC train is the meeting July 22-24 in Russia. 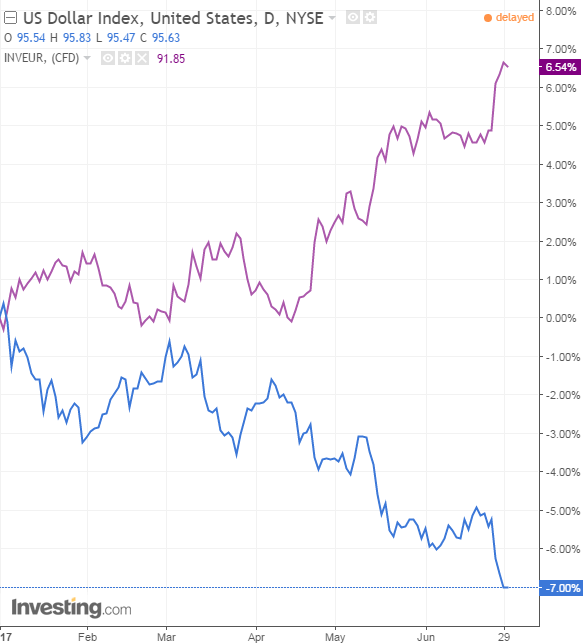 The has strengthened almost 9% against the dollar and 6% against a in the first half of the year. Nervousness around the currency since the beginning of the year stemmed from political uncertainty in France before the national election, where both extreme right and extreme left parties are euro skeptics. Rising growth and inflation in the eurozone as well as Emmanuel Macron’s victory in France spurred the euro to a 52- week high. The German election in September is the next event to watch, as any signs of euro skepticism will drive the euro lower.

As mentioned above, the greenback lost almost 9% against the euro this year, and the is down 7% against a basket of currencies. The weakness comes because of doubts regarding the pace of future rate hikes as well as the delay in Trump’s infrastructure agenda and tax reform, which was supposed to stimulate growth and strengthen the dollar. According to Investing.com’s , markets aren’t expecting another rate hike in 2017. Any change in that expectation, or the passage of Trump’s tax legislation, or forward movement in his infrastructure agenda will push the dollar higher during the second half of the year. 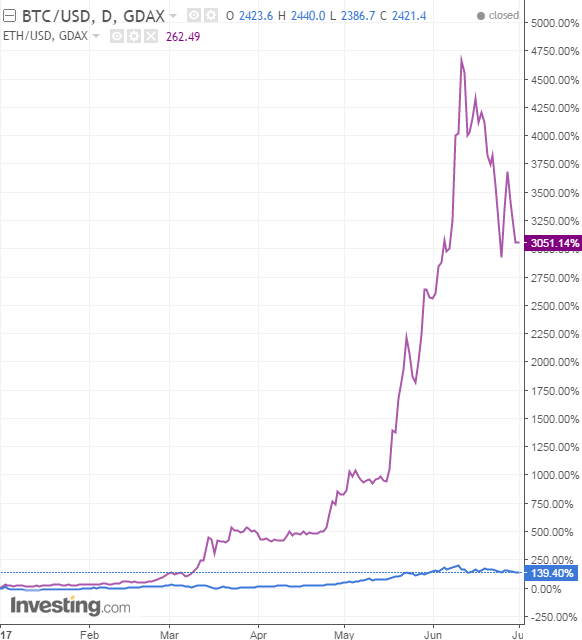 Borrowing from boxing terminology, the old-guard financial markets would be nothing but undercard events next to the cryptocurrencies’ main event of this past year. They’ve exploded since the beginning of 2017, both in price and in volume.

, for example, had a daily volume of 10 million dollars on January 1st. Today, its daily volume is an incredible billion dollars. And if you think that’s amazing—Ethereum’s price is up 3250% this year. That’s not a typo…a three thousand-plus percent increase in price, from a little over $8 at the start of the year to its closing price of $280 on June 30.

Calling a 140% jump in price an under-performance is ridiculously harsh, we know. However, , with gains of just 140% YTD, was one of the worst performing cryptocurrencies during the past six months.

and , the #3 and #4 of the cryptocurrencies world, are up 900% and 400% respectively over the same period. Ethereum surpassed Bitcoin late last month as the digital currency with the largest daily volume, and Bitcoin’s advantage has shrunk from a market cap 20 times bigger than Ethereum’s, to just 1.4 times bigger as of today.

Bitcoin was undoubtedly a good investment in absolute terms (for comparison, 140% is about the S&P’s return over the past eight years), but if you are into cryptocurrencies, you could have done better with almost any other prominent digital currency now on the market.