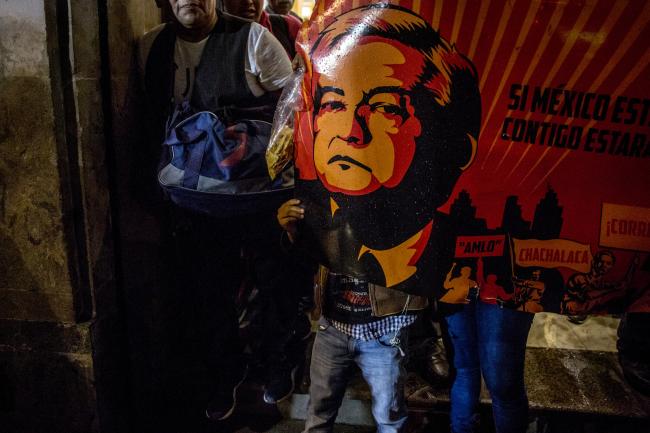 (Bloomberg) — Mexico’s peso is all of a sudden the worst performing major currency as investors begin to accept that the next president is likely to be the populist firebrand they feared.

It’s a stark reversal that took hold over the past week, coming after the peso posted the biggest global gains in the first quarter amid optimism the country would reach a favorable outcome in trade talks with the U.S. and Canada. Now, traders are refocusing on the political outlook before the July 1 election, and see Andres Manuel Lopez Obrador coasting to victory.

That view was cemented Sunday night during the first debate, when Lopez Obrador — who is known for a quick temper — played it safe as rivals attacked his security and economic policies. That disappointed investors who hoped the confrontations would make the front-runner stumble. Lopez Obrador now has a more than 20 percentage point lead over the No.2 candidate, Ricardo Anaya, who failed to inflict much in the way of damaging blows.

“Finally, it looks like it’s being priced in,” said Christian Lawrence, a currency strategist at Rabobank in New York. “International markets have woken up to the looming election.”

The peso has lost 4.5 percent over the past five days after it reached the highest closing level in six months April 16, and traded at about 18.85 per dollar as of 1:23 p.m. in New York. The currency broke through its 100-day moving average earlier in the day, a sign to some technical investors that more losses may be coming.

Traders are concerned that Lopez Obrador could roll back the historic opening of the energy industry to foreign investment and that his pledges to increase social spending would blow out the budget deficit. The 64-year-old former mayor of Mexico City is making his third run at the presidency after losing narrowly in 2006 and by a wider margin in 2012.

“The combination of recent USD strength, the ongoing Nafta uncertainty and the political uncertainty in Mexico as the campaign picks up is all contributing to the weaker peso,” said Eric Viloria, a currency strategist at Wells Fargo (NYSE:) who sees the peso heading to 19 per dollar.

To be sure, there are political analysts who think as president Lopez Obrador is likely to be more like Brazil’s former President Luiz Inacio Lula da Silva — who fought for programs to help the poor while preserving market-friendly reforms from his predecessor — and less like Hugo Chavez, who destroyed Venezuela’s economy with his socialist policies.

Before the recent selloff, the currency had gained 9.2 percent this year amid optimism officials would reach a deal on Nafta in the first half of the year even as Lopez Obrador had a steady lead in polls.

But the outlook for Nafta also suffered a fresh blow Monday after a tweet from Donald Trump in which he insisted Mexico needed to reinforce border security and said “we may make this a condition of the new NAFTA Agreement.” Investors are concerned that reaching a deal may get more complicated if negotiations were to drag on into a Lopez Obrador presidency.

Also not helping matters were comments from central bank chief Alejandro Diaz de Leon, who ruled out intervention to support the peso.

Australia’s central bank in ‘no particular rush’ to raise...