Blog - Latest News
You are here: Home / Educations / March is done and dusted. What can we look forward to in the EURUSD in...

Something more than what we experienced in March?

It is month end/quarter end for most traders.  Good Friday is today and most traders are taking the day off.  So it makes sense to take a broader look at the EURUSD.

Let’s start by looking at the Daily Chart. 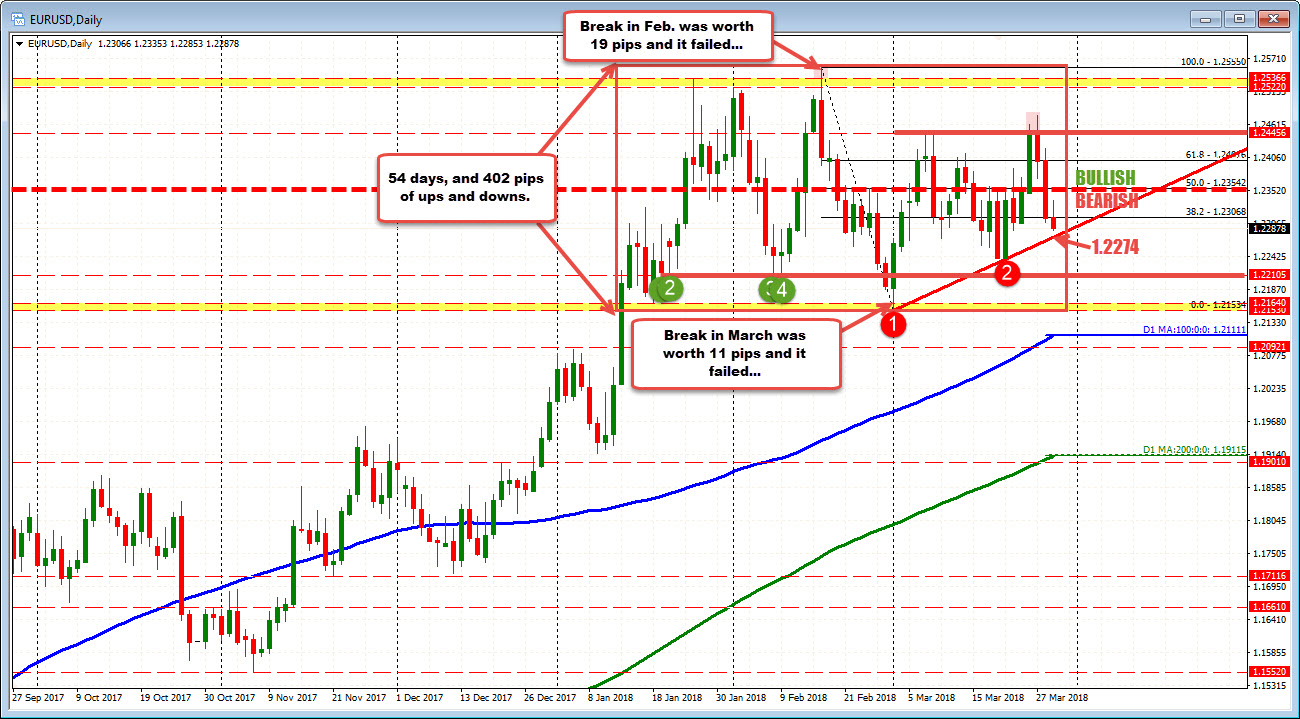 The midpoint of the range comes in at 1.23542.  The current price is below that midpoint thanks to the tumble on Wednesday.

If a midpoint of a range is a barometer for bullish above/bearish below. With the price currently below that midpoint, the bias is negative.

What happened at the extremes over the last 54 days?

So there was a break of a key low, but that break failed quickly after 11 pips.   That’s not a lot of momentum.

The market is saying from those failures, “I am unsure of the next major move”.   Putting it a different way, the sellers had their chance to break and take it lower and they chickened out.  The buyers had their chance to take the price higher and they chickened out.  That is what the price action says.  So we sit in the middle.

Is that all bad?

There are trading opportunities, but it is mostly intraday swings. That is why recently I look/post mostly from the hourly chart each day.

Eventually though, you have to anticipate a break. The best time to do that is when the markets been non-trending for a while. That’s right now.

So are there any other clues from the daily chart that are key as we head into April?

In summary, the daily chart is saying:

There are two other key levels I will be focused on in the new trading month. That comes from the monthly chart.

Taking a broader look at the monthly chart.

The chart below is the monthly chart of the EURUSD. 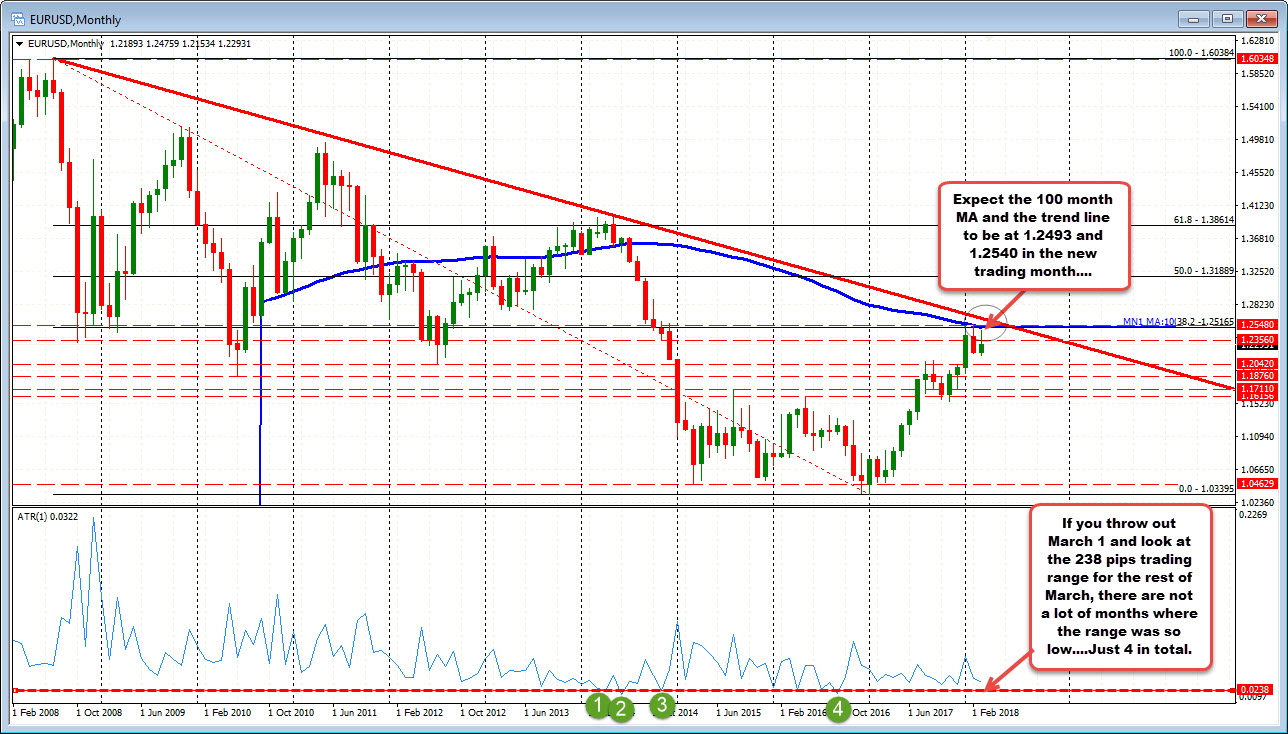 The high in March reached 1.2476 – below that key MA and retracement. That kept a bearish bias.  Sellers are leaning.

Those are key levels for the pair on a more bullish run. Again, that would manifest from more bullish moves on the daily chart first, including getting above the 50% and taking out the swing highs.

That seems pretty obvious but be aware of that 100 month MA.  Since we are anticipating more of a trend (after nearly 3 months of non-trend), we can’t rule a break higher.  Here’s why….

The narrow trading range and why it is important.

There is one final technical point as we head into a new trading month.

That is, if you throw out the first trading day of the month in March, the trading range was only 238 pips (it was 322 in total with March 1 included).

Again, I am fudging the results as the range for the month was 322 pips with March 1 included. However, the point is on a running month of trading basis, the range will be 238 pips after Monday’s trading.   That is non-trending.

What I know is non-trending transitions to trending (and/or bigger ranges). So traders have a reason to anticipate something bigger and better as far as high/low pip ranges in April.

Do we get a more trend-like move too?

After nearly 3 months of non-trend, up and down, the time may be ripe for a trend in a directional basis as well.

So anticipate a trend-like possibility.

How will we know?

Start taking out the technical levels outlined above.

One final note, is that although the bias is more bearish now (below the midpoint of the range), the price can rocket higher too.  REMEMBER, we are still above the 100 day MA. So as a trader, we need to be true to the technicals. Listen to what they are saying, even if you don’t like the fundamental story.

This is a long post, and who knows how April will turn out, but I hope you learned from it too.

Here are some key points:

PS.  I got a reminder on Facebook, that “Attacking Currency Trends” is 7 years old. Lots of the breakdown from above, you can learn in the book.

I always liked to sign the book, “Remember, attack the trends in your trading and your life”.

Maybe April will give us some trends in our trading (be on the lookout).  As for your life, lookout for those good trends to follow and be sure to attack them too.