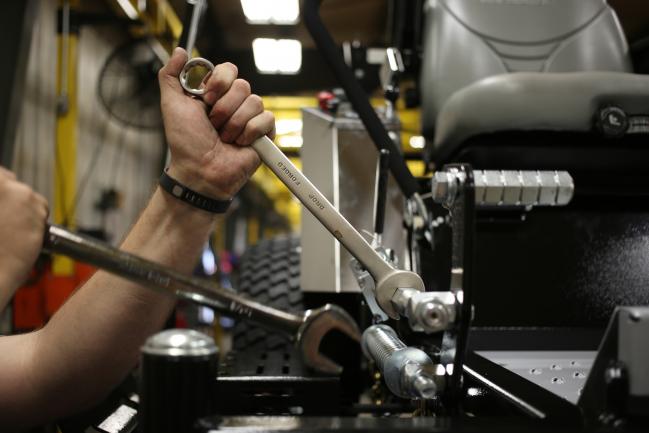 © Bloomberg. A worker tightens a bolt on a completed lawnmower at the Dixie Chopper manufacturing facility in Coatesville, Indiana, U.S., on Friday, June 12, 2015. The U.S. Census Bureau is scheduled to release durable goods figures on June 23.

(Bloomberg View) — In November 2014, the average hourly pay of production and nonsupervisory workers in durable goods manufacturing fell behind that of their peers in the rest of the private sector for the first time on record, according to the Bureau of Labor Statistics’ monthly establishment survey. I described this in a column a few months later as a “momentous” workplace development, a sign of the demise of the “blue-collar elite.”

Since then, factory workers have continued to trail their private-sector peers in hourly pay most months, although they’ve stayed close. In February, the disparity was $22.40 to $22.28. Here are the two series since 1964 in inflation-adjusted dollars:

This makes it look like manufacturing jobs, despite all the attention lavished on them by President Donald Trump and lots of other people (including me), aren’t anything special anymore. As Marc Levinson of the Congressional Research Service put it in a report last year, “The assertion that manufacturing as a whole provides better jobs than the rest of the economy is increasingly difficult to defend.”

But to Lawrence Mishel, distinguished fellow at (and until recently president of) the Economic Policy Institute, a think tank created in 1986 “to include the needs of low- and middle-income workers in economic policy discussions,” the picture of manufacturing pay painted by my 2015 column and Levinson’s 2017 report didn’t ring true. And in a report issued last month, Mishel convincingly demonstrates that, actually, manufacturing workers still “earn 13.0 percent more in hourly compensation (wages and benefits) than comparable workers earn in the rest of the private sector.”

What explains the difference between that finding and the charts above? It’s partly that it relies on different BLS pay data, from the household survey rather than the establishment survey. It’s partly because Mishel adjusts his numbers for education, experience, gender, geography and race to allow for a comparison of “comparable workers.” And it’s partly about the benefits:

Health insurance and retirement benefits are valuable things, so yes, Mishel’s right: Manufacturing work is still compensated markedly better than other private-sector work. Another thing I noticed while looking through the BLS pay data is that the weekly pay numbers for manufacturing look a lot better than the hourly ones:

I’m again using the BLS’s inflation-adjusted numbers, which are reported in early-1980s dollars, to make it easier to see trends over time. Current-dollar average weekly earnings in February were $946.90 in durable goods manufacturing, $828.48 in nondurable goods, $900.55 in all manufacturing and $757.12 in the private sector overall. The fact that manufacturing workers make less per hour than non-manufacturing workers but more per week must mean that they work more hours per week. That they do, and the gap has been growing:

Part of this has to do with the entry of women into the workforce, which has mostly happened outside the manufacturing sector. In 1964, about 25 percent of manufacturing workers were women; now it’s just under 28 percent. Among non-manufacturing workers, meanwhile, women’s share has grown to 52 percent from 34 percent. Women are much more likely to work part time than men, and in a lot of cases, that’s out of choice.

Still, it also seems fair to say that jobs in manufacturing tend to be real jobs, with a full work week and benefits, while much of the work created outside the sector over the past few decades is of a more tenuous nature. It’s hard to say how much of this is intrinsic to manufacturing work and how much is historical happenstance. Mishel’s report includes a section, for example, on the growing use by manufacturers of temporary-help firms and other staffing-services firms that pay less and offer fewer benefits than manufacturing firms do. But for now, at least, manufacturing jobs remain better than the alternatives.

Justin Fox is a Bloomberg View columnist. He was the editorial director of Harvard Business Review and wrote for Time, Fortune and American Banker. He is the author of “The Myth of the Rational Market.”