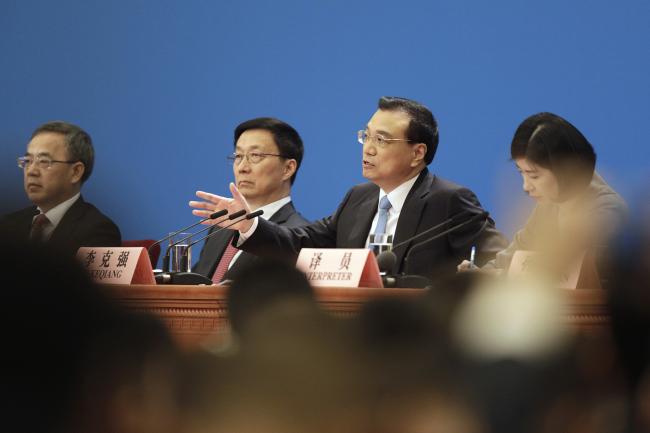 (Bloomberg) — Premier Li Keqiang pledged that China will further open its economy, including the manufacturing sector, and reiterated that it doesn’t want to see a trade war.

“There’s no winner in a trade war, and war is going against the rules of trade, which is based on negotiation, consultation and dialogue,” Li said Tuesday at a press conference at the close of the annual National People’s Congress in Beijing. China wants balanced trade and also wants the U.S. to ease restrictions on technology exports, he said.

As China marks 40 years of its reform and opening up started by Deng Xiaoping, leaders are also preparing for further deterioration in trade relations with Donald Trump’s White House. The U.S. administration plans to impose tariffs worth as much as $60 billion on Chinese products as early as this week to punish Beijing for what the U.S. perceives as intellectual property theft from American businesses, according to two people familiar with the matter.

“With China’s economy so deeply integrated to the international economy, shutting the door would only block China’s own way,” Li said. He pledged to lower import tariffs and cut taxes, and added that in the process of opening manufacturing further, China won’t force foreign companies to transfer technology to domestic ones and will protect intellectual property.

Li spoke at the conclusion of a two-week meeting that included amending the constitution to scrap term limits for President Xi Jinping, the biggest overhaul of financial regulation since 2003 and the appointment of Yi Gang as the first new central bank chief in 15 years. Communist Party leaders also elevated Xi’s chief economic adviser Liu He to vice premier, giving him greater sway over policy areas that were traditionally the domain of the premier.

“We still have great space and potential in opening-up,” Li said. “Our tax rate for imported goods is at a medium level by international standards. China will further reduce the overall tax level for imported goods.” Opening will be a step-by-step process, and while doing so may have an impact on China’s trade surplus, it’s a price worth paying, he said.

Yi signaled on Monday that he’ll push to maintain the course of financial liberalization set by his predecessor, Zhou Xiaochuan. We should “push forward the reform and opening-up of the financial sector,” he told reporters at the Great Hall of the People after his appointment.

Li said the economy has been running in a reasonable range in the past five years while creating more than 60 million jobs, ensuring full employment. He said China aims to create 13 million new jobs this year, and referenced the new monthly jobless rate the statistics bureau plans to start releasing regularly next month to better track labor markets, citing it as an example of “the government putting pressure on itself.”

“New drivers of growth have been critical in generating new jobs,” Li said.

China’s cooperation with other countries will follow market rules, Li said, and its contribution to global growth helps bring peace to the world. The country achieved its development in a peaceful international environment and that’s what it needs to continue modernizing, he said.

Separately, the Finance Ministry said in a statement Tuesday that the government will waive income taxes for individual overseas investors trading futures for three years, the latest sign that leaders want to do more to attract foreign investors.

To contact the editors responsible for this story: Jeffrey Black at jblack25@bloomberg.net, Jeff Kearns, James Mayger