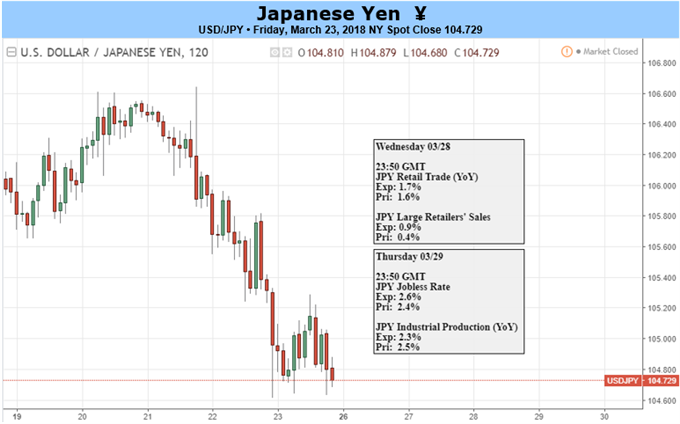 Trade all the major global economic data live and interactive at the DailyFX Webinars. We’d love to have you along.

This past week was a volatile one with plenty of developments which saw stock markets fall and the anti-risk Japanese Yen emerge higher against its major peers. A relatively less hawkish FOMC monetary policy announcement on Wednesday fueled a US Dollar selloff across the aboard and the Yen benefited from it. But things really started heating up the following day.

Seemingly endless developments out of the white house ignited aggressive risk aversion. First Donald Trump’s lead lawyer John Dowd resigned. Then, the president signed off on $50 billion in tariffs aimed at China. Less than eight hours after Dowd’s resignation, National Security Adviser H.R. McMaster met the same fate. All of this helped take USD/JPY to its lowest level since November 2016.

The week ahead will probably leave the Japanese Yen once again mostly vulnerable to external developments as opposed to domestic ones. To give an example, when Japan’s February CPI report crossed the wires at its highest since March 2017 last week, the currency failed to offer a meaningful reaction even though prices moved steadily towards the Bank of Japan’s inflation target.

As far as the local docket goes next week, we have a jobless report due where unemployment is expected to rise to 2.6% from 2.4%. However, the more prominent risk here for the Japanese Yen domestically speaking can be the aftermath of the Shinzo Abe scandal and whether or not it may lead to a new regime change, his popularity has been falling since. We will also see how or if the country responds to it not being included in the tariff exemption list that Mr. Trump announced last week. They are as follows:

On the external front, keep an eye on the US PCE core outcome. This is the Fed’s preferred measure of inflation. Data out of the country has been coming out mostly in-line with economists’ expectations. An unexpected upside surprise here might fuel stronger hawkish Fed rate hike expectations and if stocks fall on this, the Japanese Yen could rise. Although the previous headline inflation report failed to spark much of a reaction.

In addition, with the grace period for the US tariffs now expired and the exempted countries listed, keep an eye out for how exposed nations respond. Shortly after Trump announced tariffs targeted against China, the country retaliated by announcing reciprocal tariffs on US steel, aluminum, pork and wine products. Needless to say, the anti-risk Yen rose amidst these developments.

Europe Should Not Retaliate Against US Protectionism