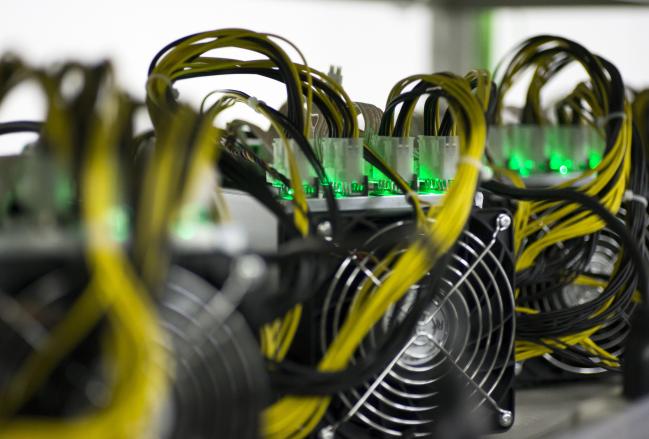 © Bloomberg. Bitmain Technologies Inc. application specific integrated circuit (ASIC) units sit on a shelf inside the DMM Mining Farm, operated by DMM.com Co., in Kanazawa, Japan, on Tuesday, March 20, 2018. Japan is moving toward legalizing initial coin offerings, even as countries such as China and the U.S. restrict the fundraising technique because of their risks for investors. A government-backed study group laid out basic guidelines for further adoption of ICOs, according to a report published on April 5.

Together with ING Bank NV, the London-based bank handled a letter of credit for Cargill Inc. which relied on the blockchain technology developed by the R3 consortium, according to an emailed statement on Monday. The letter of credit backed a shipment of soybeans transported last week from Argentina to Malaysia, the statement added.

The transaction was an end-to-end trade between a buyer and a seller and their respective banks that was completed on one shared digital application rather than multiple systems, according to HSBC. It was the first scalable live trade finance transaction using blockchain, it added.

“This is an inflection point for how trade is conducted,” Vivek Ramachandran, HSBC’s global head of innovation and growth for commercial banking, said in the statement. “With blockchain, the need for paper reconciliation is removed because all parties are linked on the platform and updates are instantaneous.”

Blockchain helps to streamline the traditional paper-intensive process in trade finance, which normally requires between five and 10 days to exchange documents, HSBC said. In the Cargill transaction, the exchange was completed in 24 hours, it added.