Blog - Latest News
You are here: Home / Fundamental Analysis / How To Trade FOMC And RBNZ

The most important event risk this week will be Wednesday’s . This will not only be Jerome Powell’s first FOMC as Fed Chair but the central bank is widely expected to raise interest for the first time this year. Thankfully the rate hike is not controversial and has been fully . The is trading higher ahead of the monetary policy announcement because investors are hoping that the hike will be accompanied by hawkish guidance. The primary focus will be the Fed’s dot plot and Powell’s . A number of economists are looking for the dot plot to move in favor of 4 rate hikes but since the last policy meeting, data has been mixed. Job growth was very strong and economic activity accelerated but wage and spending growth softened. We know from Powell’s semi-annual testimony that he is optimistic and believe that headwinds have become tailwinds.

Yet there is no real advantage to telegraphing 4 rounds of tightening so early in the year. They can wait and see how the economy and the markets absorb the first 2 hikes before suggesting that 2 more will follow. This gives the Fed flexibility in the months ahead but it is also important to realize that the dot plot reflects the individual views of U.S. policymakers and we know that many of the doves are now calling for hikes. That is what makes trading this FOMC rate decision so tricky. We know the Fed will raise interest rates and will be optimistic but it’s unclear what changes will be made to the economic projections and dot-plot forecast. If the dot plot shows the Fed favoring 4 rate hikes, will break 107 and will hit 1.22. However if it stays at 3 hikes this year (2 more after Wednesday’s tightening), the will fall and the steepest losses should be versus the yen and . We’ll be looking for USD/JPY to sink to at least 105.75 and GBP/USD to rise above 1.41 while breaks .9500 easily. 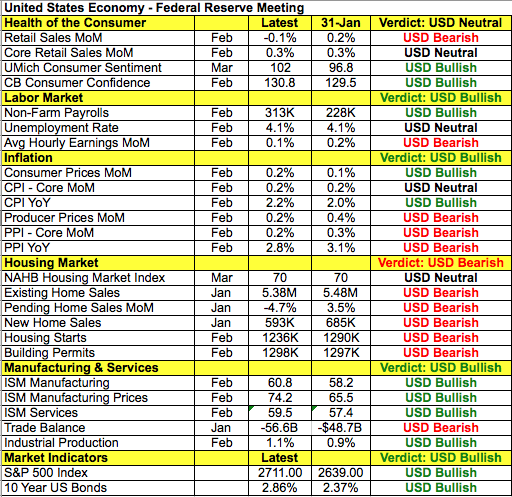 Approximately an hour after the will be the Reserve Bank of New Zealand’s . The dropped to a c-month low ahead of the big event as fell for the third auction in a row. Taking a look at the table below, there’s been both improvement and deterioration in the New Zealand economy with softening, improving and inflation on the rise. At the last meeting, the RBNZ lowered its GDP forecasts, emphasized its neutral policy and warned that a drop in inflation expectations could trigger a rate cut. NZD sold off on the back of these comments. However with the Deputy Governor subbing for incoming RBNZ Governor Adrian Orr one last time, we don’t expect any additional changes to the forecasts or policy guidance. So if the Fed fails to live up to expectations and the is unchanged, we could see further losses in NZD/USD. 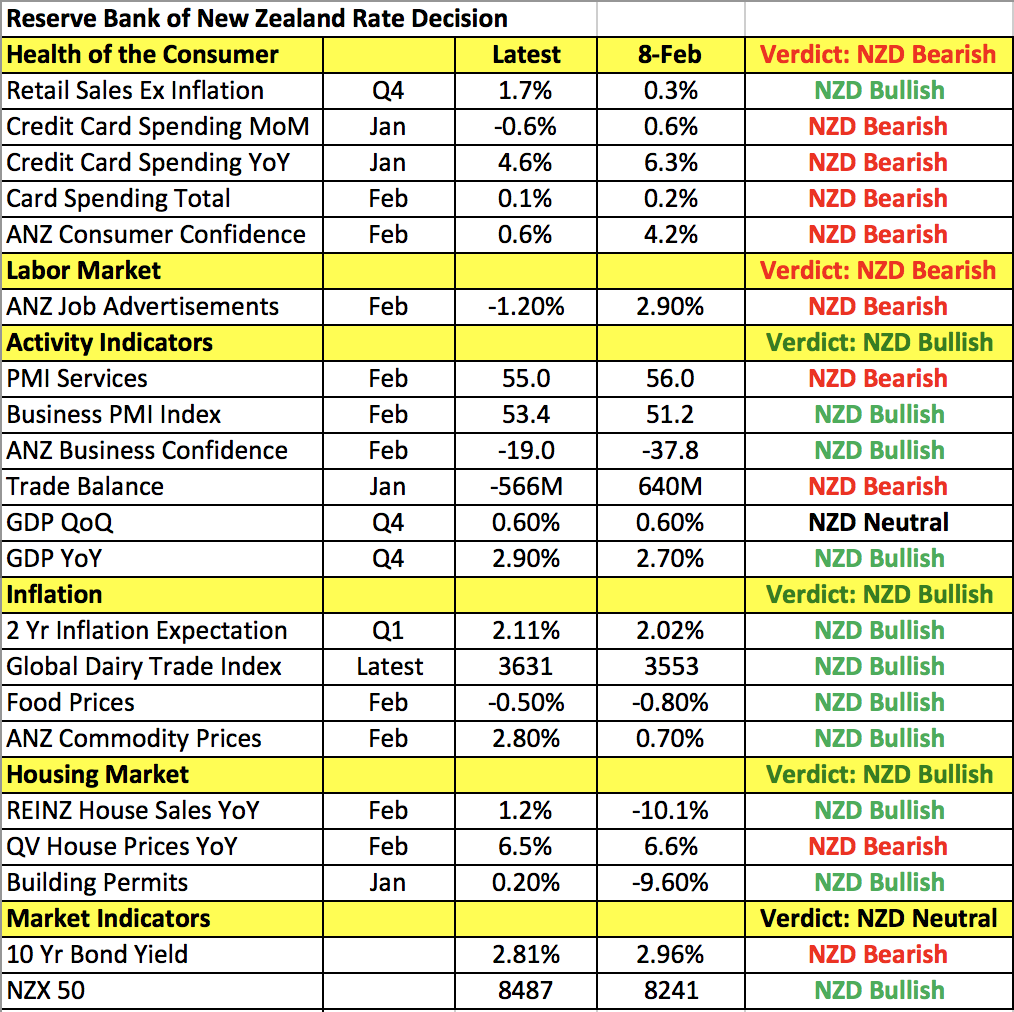 The sold off but the managed to resist the ’s strength thanks to the 2% rise in and better-than-expected . The from the March Reserve Bank of Australia meeting that was released overnight revealed nothing new. The RBA sees further progress on the and inflation and expects growth to exceed potential this year. These comments helped AUD outperform at the start of the NY session but as the day progressed, AUD/USD gave up its gains to trade lower for the fourth consecutive trading day. At the same time, rebounded for the first time in 3 trading days and a move above 1.07 is likely.

The also fell hard Tuesday on the back of softer investor confidence. Both the and ZEW surveys dropped to their lowest levels since September 2016. Last week’s dovish comments from the ECB is still haunting the currency and now EUR/USD has found itself back below 1.23 and barely holding 1.2250. In fact Tuesday’s move took the single currency to its weakest level in 3 weeks versus the U.S. dollar and 1.22 is now in sight. Although traded lower against the greenback, its decline is modest compared to other major currencies. Inflation in the U.K. slowed in February with easing to 2.7% year over year from 3% the previous month. Sterling is resilient despite this report because investors hope that the Bank of England’s on Thursday will be hawkish.