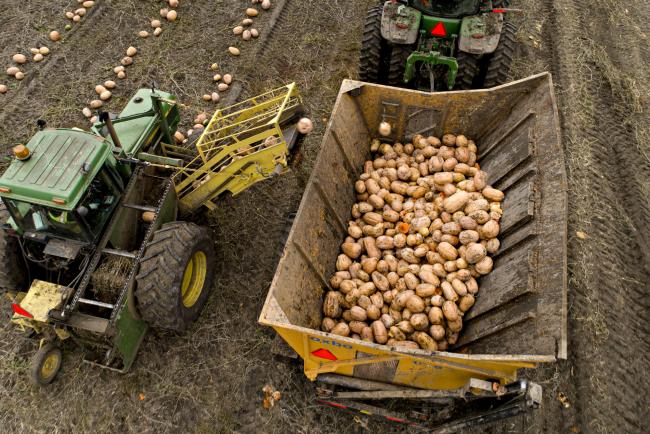 © Bloomberg. Pumpkins grown for Nestle USA Inc. Libby’s Pumpkin are harvested in this aerial photograph taken above Hartsburg, Illinois, U.S., on Friday, Oct. 27, 2017. About 80 percent of pumpkin sales occur during baking season, which begins in September and continues through the end of the year.

(Bloomberg) — China could hit back with measures against America’s $140 billion of annual exports to the Asian powerhouse if President Donald Trump imposes tariffs.

The president is expected to announce punitive actions on Thursday after the U.S. Trade Representative’s office concluded that China is violating intellectual-property rules. When the Chinese respond, “they’ll pick and choose with political aims in mind,” said Claude Barfield, a resident scholar at the American Enterprise Institute, who was a consultant to the Reagan administration on trade policy.

To date, China has followed a policy of “strategic composure” in dealing with Trump’s America First ethos. If that changes, below are some potential targets.

Agriculture may be on the front line of Chinese retaliation — and the sector, one of the few in America that runs a trade surplus, is painfully aware.

The U.S. shipped $14.6 billion of soybeans to China, its biggest buyer, in the last marketing year — more than a third of the entire crop. China is making noise about the purchases, with a Tuesday editorial in its Global Times newspaper accusing the U.S. of “dumping” its government-subsidized beans.

Rumblings against U.S. sorghum, also dependent on China trade, sent that commodity plunging in February. The chief executive of the American Soybean Association has said Chinese retaliation would have long-term consequences, as Brazil and other competitors would likely take market share.

China would feel some impact if it cuts back — it’s heavily dependent on U.S. soybeans for cooking oil and animal feed, especially in seasons when Brazil isn’t harvesting. But the damage would be real, both economic and political. Soybean production is concentrated in middle-American states that voted for Trump.

U.S. pork exports could be another “easy target,” amid a boost in China’s sow herd, according to Vertical Group, a New York-based investment bank.

The purpose of USTR’s investigation was to shield the IP of American companies, a key concern in Silicon Valley. But U.S. tech companies are also vulnerable to retaliation, especially companies such as Apple Inc (NASDAQ:). and Intel Corp (NASDAQ:). that have manufacturing operations in China.

Another possibility is that China emulates the European Union’s retaliatory tactics, the AEI’s Barfield said. The EU is considering restrictions on imports of U.S. goods including Harley-Davidson motorcycles (whose maker is based in House Speaker Paul Ryan’s home state of Wisconsin) and jeans from San Francisco-based Levi Strauss & Co. (headquartered in House Minority Leader Nancy Pelosi’s district.)

China hasn’t been shy about threatening U.S. corporate interests. The Global Times warned in late 2016 that a trade war would have economic consequences. “Boeing orders will be replaced by Airbus,” the Communist Party newspaper said in an editorial.

The U.S. recorded a $38 billion services trade surplus with China in 2016. Some of the leading services exports from the U.S. to China include travel; intellectual property, such as trademarks; and computer software, according to the U.S. Trade Representative’s Office.

China could restrict the number of students who go to U.S. universities, hurting their funding at a time when an aging population has resulted in declining enrollment at many American schools.

China could seek to depreciate the yuan as a counter-measure, according to Wen Wang, executive dean of the Chongyang Institute for Financial Studies at Renmin University. A weaker yuan would make Chinese exports more competitive, and currency manipulation is something Trump and his allies have fumed about in the past.

“China has a lot of policy choices in its tool box,” Wang said. “China is keeping patience and waiting now, as we are well known for the strategy of gaining mastery by striking only after the enemy has struck.”

No Need for Japan’s Abe to Resign Just Yet, Party Rival Says