Gold has been consolidating in a narrow range over the last couple of trading days with upper boundary the 1325.75 resistance level and lower boundary the 1317 support barrier. The price is moving above the 20- and 40-simple moving averages (SMAs) in the 4-hour chart with weak momentum.

In the short-term, prices rebounded on the 20-SMA, but based on technical indicators, momentum is too weak to provide a sustained move higher. The RSI is holding slightly above the 50 level and the MACD created a bearish cross with its trigger line in the positive area.

In the wake of positive pressures, the market could meet resistance at the 1325.75 level, confirming the trading range, while if there is a jump above this area, prices could manage to touch the 1332.50 barrier. A stronger hurdle though could be found at the 1338 resistance, identified by the low on April 17.

Conversely, if prices are able to break the 1317 support level and also slip below the moving averages, this could open the door for the 1303 significant key level, where the price touched it several times in the past.

Turning to the medium-term picture, the market seems to be in neutral mode given that the precious metal has been trading within the 1303 – 1365 zone since January 25 . 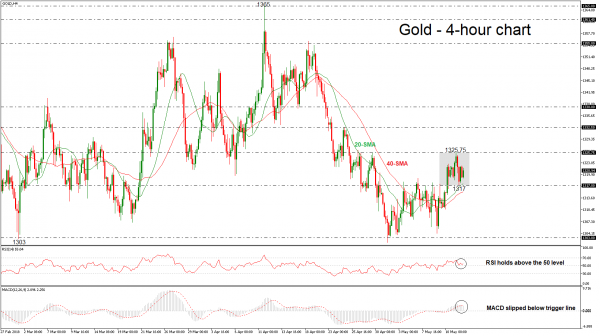