– Gold prices have continued to gyrate within a downward-sloping channel after setting a fresh yearly-high in late-January. Support thus far has held above $1,300; but short-term charts show a continued response from sellers, pointing to the possibility of near-term down-side before the longer-term bullish trend might be ready for resumption.

– The next two weeks bring a heightened focus around the US Dollar, and Gold as the ‘Anti-Dollar’ will likely be along for the ride. Tomorrow brings US CPI, and next week brings a Federal Reserve rate decision, currently carrying an 89% probability of a hike.

Gold prices were on a tear as we came into 2018, extending the rally that had started in mid-December to go along with another bearish kick to the US Dollar. After setting support at $1,236 in December, prices were almost $130 higher just six weeks later. But since that fresh yearly high posted in late-January, buyers have been unable to muster any significant strength, and Gold prices continue to gyrate within a bearish channel, connecting the post-January highs and the post-January lows. 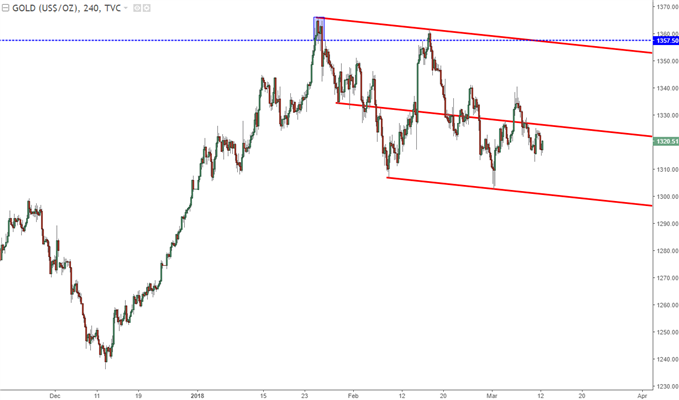 Fibonacci Support Bending, But Not Yet Broken on the Daily Chart

It hasn’t yet been an entirely negative story in Gold since that high was set, as that bearish channel has come along with a respectable response at support. Adding a Fibonacci retracement to the bullish move looked at above shows a 38.2% retracement at $1,316.63, and this has largely helped to hold support in the pair on a Daily basis. Intra-day, this has been messy, but it’s notable that we haven’t seen a daily close below this price since the first incursion earlier in February. 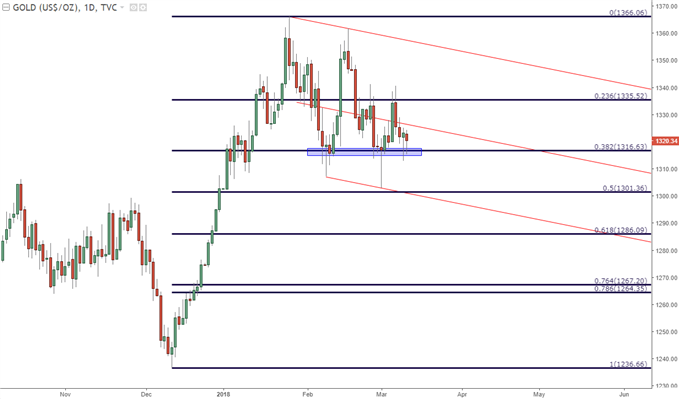 The next couple of weeks could be volatile for the US Dollar. Tomorrow morning brings US CPI for the month of February, and next Wednesday brings a FOMC rate decision with the high-expectation of getting a rate hike. This could also play out in Gold, as the build of that bearish channel syncs well with the US Dollar trying to set support throughout February. Nonetheless, traders should be careful with banking on a support break of a level that’s held-up fairly well in the face of increasing pressure over the past few weeks.

On a longer-term basis, we’d be looking at an immature bull flag formation, given the recently-started bearish channel at the top of a strong bullish run. But, near-term price action remains messy, and it can be difficult to voice that longer-term view until we see a more relevant level come into play. A top-side break of the March high at $1,340.50 opens the door for bullish approaches, with targets set towards $1,350, $1,357.50 and then the 2018 high at $1,366.06. 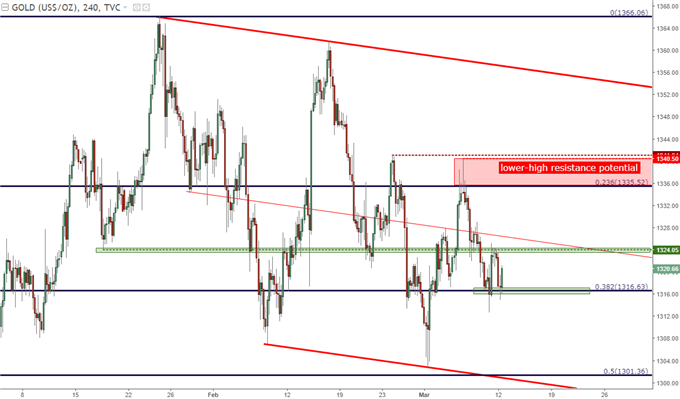 Are you looking for longer-term analysis on Gold prices? Our DailyFX Forecasts for Q1 have a section specifically for Gold. We also offer a plethora of resources on our Gold page, and traders can stay up with near-term positioning via our IG Client Sentiment Indicator.

Bitcoin May Set Fresh Lows As Traders Are Further Net-Long