The was the top performer Monday while the lagged for a second day. is up next. There are 10 open trades ahead of this week’s busy set of central bank meetings and key US data. 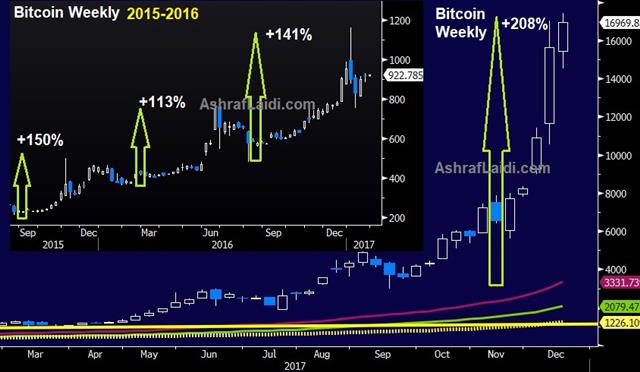 The week started off with all eyes on Bitcoin as on the CBOE had a successful launch. Volume was at 7000 contracts, which is only $119m notional but it certainly can’t be called a failure. More importantly, Bitcoin prices climbed above $17000 and were relatively stable (at least by BTC standards). Ultimately, those are all good signs for the near-term.

Bad signs, meanwhile, continue to mount in gold. We have no doubt that many gold investors or would-be investors have turned to crypto. At the margins, that means less excitement and buying in precious metals. Anything could change in crypto at a moment’s notice but for now, the outflows from gold are considerable and speculative net longs are at 4-month lows.

Technically, the trend is increasingly weak. Last week, gold broke below the October low of $1260 and slid another $12 to $1240 on Monday. The July low of $1200 is a major support level that needs to hold if gold is going to rebound in the months ahead. If not, it could get ugly for the old-fashioned analog store of value.

Looking to the short-term, housing investments have been better than gold for the past five years of the QE era. That’s expected to continue in 2018, even as regulators find creative ways to curb speculation. One spot to always watch is Australia where Q3 house prices are due. Through Q2, prices were up 10.2% y/y and 1.9% q/q. That’s expected to cool to 8.8% y/y and +0.5% q/q. Look for a small reaction in .