Gold plunged during today’s European session, following declines in the two previous days. The price reached a two-week low of 1330.70 after the pullback on the 1355 resistance level. It is worth mentioning that the price has been trading within a range since January 25 with the 1365 resistance level being the upper boundary and the 1307 support level the lower boundary.

From the technical point of view in the 4-hour chart, the RSI indicator is sloping to the downside and is approaching oversold levels, while the MACD oscillator is moving sharply lower below its trigger and zero lines, entering negative territory. The 20- and 40-simple moving averages are ready to record a bearish cross, signaling further downside pressures.

In the wake of negative pressures, and a drop below the lower Bollinger band the market could meet support at 1320, taken from the low on April 6. A successful close below this level could see a retest of the aforementioned trading range’s lower band at 1307.

However, if prices are able to break above the 20- and 40-SMAs near 1344 in the next few sessions, the risk would shift to the upside, specifically towards the 1355 resistance level. A jump above would send the precious metal to the next immediate resistance of 1361.40, taken from the peak on February 16. 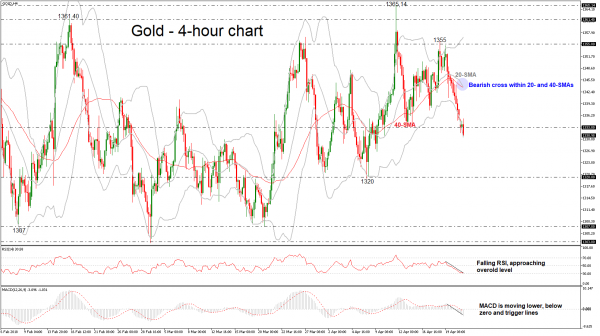