Blog - Latest News
You are here: Home / Fundamental Analysis / Gold At Critical Juncture. Watch These Catalysts For What’s Next

Gold is at the mercy of the Federal Reserve’s and communications next week. If the Fed confirms the desire for too many rate hikes this year, could get hit. If the Fed soft-pedals their Fed-speak, gold can hold up.

Technically the SPDR Gold Shares ETF (NYSE:) —which we use as a proxy for gold because of the trading volume involved—is sitting right at an important multi-year support between 114.50-115. Fundamentals can drive gold to break in either direction by next Wednesday’s Fed decision. That break could last. For the next week the Fed likely trumps all other global issues for gold. 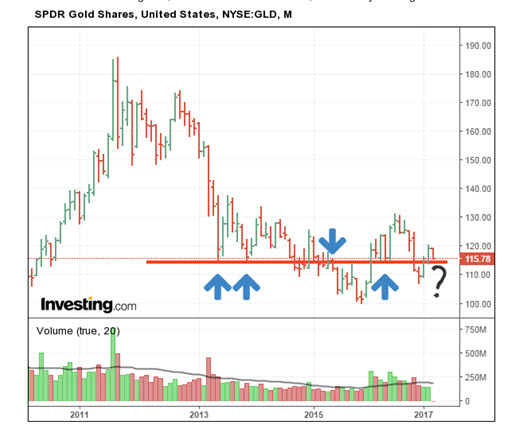 Above, GLD going back seven years. We drew a red horizontal line indicating what has been the center of critical action over the last four years. That action is denoted by the arrows. Breakdowns and breakouts happen at this level.

What Does Gold Have To Do With The Fed?

Gold has multiple drivers. One is that it’s a safe-haven from economic turmoil. Another is that it’s used as an inflation protection place-holder.

There is a negative driver though. A more aggressive central bank and higher interest rates can drive gold down.

Higher rates encourage investors to put money into assets with higher returns, such as higher yielding bonds. When they look for a source of funds, it’s natural for them to look to their lower returning instruments. And gold, of course, is a zero-yielding asset. As rates rise, investors could decide to sell gold.

Major players pushing those interest rates around are central banks and more specifically the US Federal Reserve, the Fed.

The Fed has had an incredibly loose monetary policy in place ever since the 2008 market meltdown. That drove rates to near zero. As rates were near zero, investors had less of a reason to exit gold. In fact, the economic crisis caused investors to hold on to and buy more gold. Low rates and economic fears drove gold higher.

But now that central banks are looking to reverse course for the first time in almost a decade, that gold trade is at risk of reversing back down. 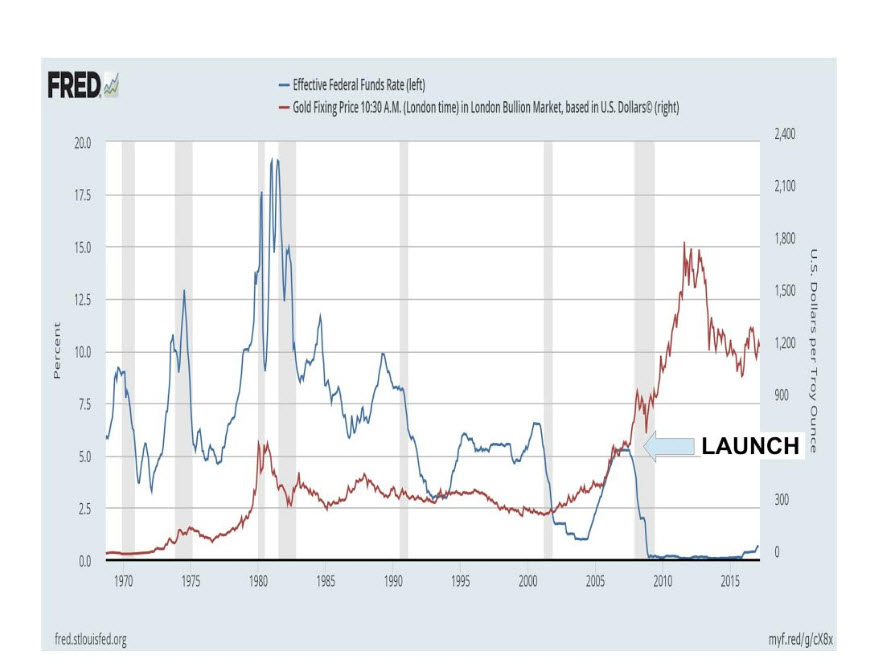 In the above chart, you see gold in red versus the Fed Funds rate in blue. When the Fed started cutting rates from 5% to near zero, gold “launched.”

Now that the Fed is contemplating lifting that little blue line back up, gold has something to contend with.

The Fed Next Wednesday

The FOMC will most likely raise rates on March 15th. Many Fed officials have recently turned into rate hawks, signaling in unison that a hike could be at hand.

We think the pick-up in the Fed’s favorite inflation measure, the , was the key catalyst that transformed everyone into hawk.

The last read saw a month-to-month jump of .3%. If we get a few more of those, we’ll all worry about inflation rates moving nicely above their 2% target. Because of that the Fed has turned hawkish.

After a string of .1s the Fed’s favorite inflation measure jumped last month.

Next week the Fed holds a press conference. In December, at their last FOMC update of their targets, the Fed raised the number of hike assumptions for 2017 from two to three. (See here. Search “Federal Funds Rate” to view their increase in Fed Funds expectations at that meeting.)

We’d expect the same thing to happen next Wednesday.

Depending on what the Fed says, that blue Fed Rate line in the chart above that has an inverse correlation with gold could soon be expected to start moving higher more quickly.

Fed Chair Janet Yellen, at her last press conference corresponding with the Fed’s increase in rate assumptions for 2017, had this to say:

That brought the rate assumptions from two hikes in 2017 to three. Instead of “some” as she said in December, next Wednesday we expect Fed Chair Yellen to say, “We’re all in.”

That could act to raise their rate assumptions from three hikes in 2017 to four or more. Which would mean higher than expected rates. And that could mean a higher blue line which could be a drag on gold.

Tomorrow is the granddaddy of all economic reports, , or NFP. It is the most important measure the Fed uses to assess growth.

have dropped to 40-plus year lows. Fewer jobless claims typically mean more available jobs which can show up in the NFP report.

The for February was released yesterday, and came in at 298K which helps confirm a big number for Friday.

If correct, that will spook the Fed even more into believing it needs more hikes than the current three expected.

Our Take On Gold

Currently we are not completely sold that gold will break down. Though we highlight this major catalyst, still, we want to see how gold reacts around the news. A break is negative, but if gold holds on the news, that would be bullish action.

Gold is at a critical juncture. It needs to hold, otherwise it could break down further. Additional rate hike expectations from the Fed next Wednesday could be that catalyst. If gold manages to hold against such negative news, it could be perceived as a “good reaction” and would then have the chance to reverse and go back up.

Next Wednesday is huge for gold.

Disclaimer: ETFs reported by Elazar Advisors, LLC are guided by our daily, weekly and monthly methodologies. We have a daily overlay which changes more frequently which is reported to our premium members and could differ from the above report.

Portions of this article may have been issued in advance to subscribers or clients. All investments have many risks and can lose principal in the short and long term. This article is for information purposes only. By reading this you agree, understand and accept that you take upon yourself all responsibility for all of your investment decisions and to do your own work and hold Elazar Advisors, LLC and their related parties harmless. Any trading strategy can lose money and any investor should understand the risks.