GBPJPY has reversed back down again after finding resistance at the two-week high of 149.37 achieved this week. This top is just below the 38.2% Fibonacci retracement level of the downleg from February’s high of 156.60 to March’s low of 145.00.

Momentum indicators are pointing to a bearish bias in the short term with the RSI indicator holds just below the 50 level and the MACD oscillator fell below the zero line with weak momentum. It is worth mentioning that the price is trading below the 20 and 40 simple moving averages in the 4-hour chart acting as strong resistance level at 147.95 and 148.28 respectively, while the 23.6% Fibonacci could be a key resistance level near 147.70.

If price action remains negative and falls below the 147.40 strong support obstacle, the next major level to watch is the 146.25 barrier. Further losses could push GBPJPY towards the 145.00 psychological level.

Conversely, if the price creates a bullish movement again, then the focus could shift to the upside until the 149.40 resistance barrier. If this level is breached, it could increase bullish pressure until the price hits the 150.00 critical level. 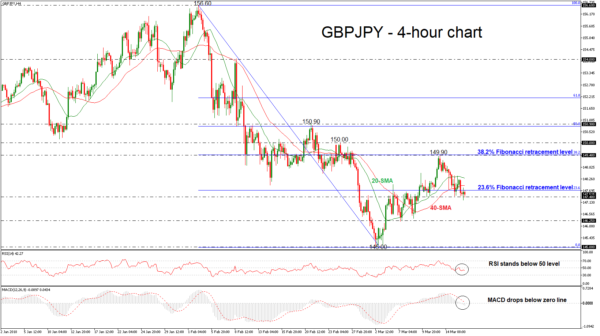