GBPAUD has been on a remarkable rally since yesterday, putting strong efforts into exiting the range-bound trading started in early February. The pair managed to touch the 1.8010 handle today, a level last seen in June 2016, but in the four-hour chart, momentum indicators suggest that the market could be overstretched.

Positive sentiment dominates in the market as long as prices hold above their 20-period simple moving and the Ichimoku cloud. The MACD is well into positive territory and is also above its red signal line, embracing the bullish background. However, looking at the RSI, the index is positively sloped in overbought territory above 70, hinting that negative pressures might occur in the near-term. Stochastics, which tend to give signals earlier than the RSI, have already posted a bearish cross in overbought territory above 80 and now seem to be heading lower.

In case of a decline, immediate support is likely to come at 1.7910, a level approached several times during February. A move lower from there could meet the 20-period SMA at 1.7873, and if the market manages to breach this mark as well, the focus could shift to the blue Kijun-sen line which is currently located at 1.7808. 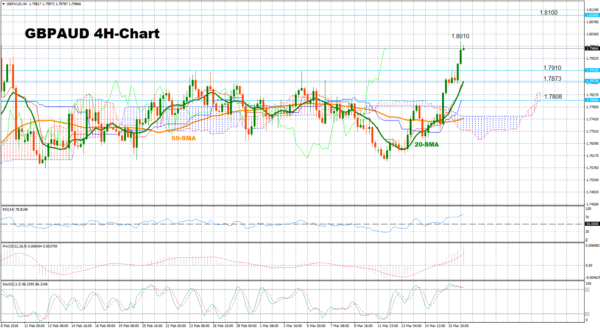 US 30 Index Trades in Symmetrical Triangle; Weak Bias in Near Term