– GBP/JPY put in a big break of a long-term trend-line in February, and that trend-line has come back into play as the past two weeks have now shown two separate instances of resistance at this prior support level.

– Last week saw resistance come-in around the 150.00 psychological level, and as we opened this week, that bullish response has continued. This adds a number of questions to the short-side scenario behind the pair, and below we look at a way to try to time that theme by using a break of short-term support. Should prices run above the 150.80 level this week, the door re-opens for short-term bullish strategies in the pair.

If you’re looking for longer-term analysis on GBP, JPY or the US Stocks, click here for our Trading Forecasts.

GBP/JPY Awakes From Slumber to a Surge in Volatility

GBP/JPY has woken up over the past few months. The normally volatile pair traded with an uncharacteristic lack of volatility throughout Q4 of last year into January of 2018. The pair had perched up to a fresh post-Brexit high on the second trading day of February, at which point bears came-in to produce a move more typical of GBP/JPY, with more than 1,000 pips of deviation over the next 28 trading days (from February 2 to March 2). Support began to show off of the 145.00 psychological level earlier in March, and since then we’ve largely been watching correction as bids help the pair bounces back towards 150.00.

At this stage, the post-Brexit trend-line that had held the lows in the pair over multiple tests in February is now showing as resistance as we move towards April. 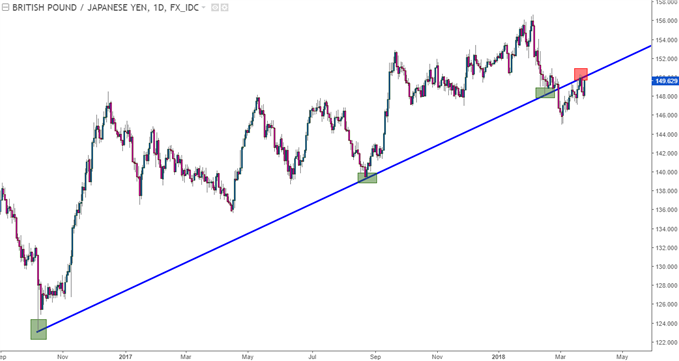 Last week’s check of resistance at that prior support trend-line wasn’t the first such instance of this happening, as we’d also seen something similar play-out in mid-March. That previous resistance touch also coincided with the 38.2% Fibonacci retracement of the February sell-off, and this led to a move down to 147.00. But once we got to 147.00, buyers showed up and helped to push prices right back towards resistance, creating a higher-high in the process as another level of interest come into play off of the 150.00 psychological level. Another higher-low showed after that resistance hit, and this further obscures the usability of that short-term bearish momentum that had shown so prominently in February and early-March. 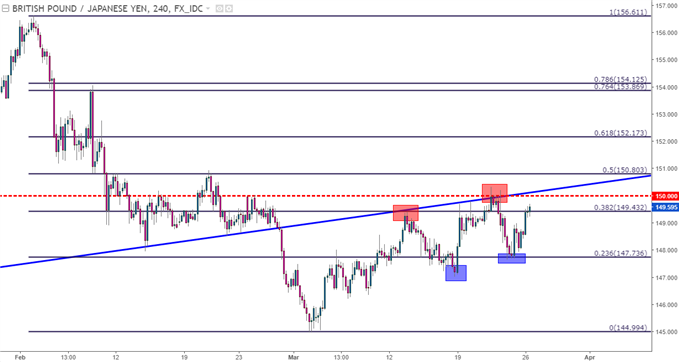 The Bullish Side of GBP/JPY

The bullish side of GBP/JPY would be centered around the momentum that’s shown so far this week after the build of another higher-low. The primary complication with the long side of GBP/JPY at the moment is the fact that we’re testing a big area of resistance, and plotting top-side profit targets could be challenging considering that we’re bucking-up against the 150.00 level.

The price of 150.80 could be particularly interesting for bullish approaches. This is the 50% retracement level of that February sell-off, and breaking above this price would also give us fresh monthly highs to work with. A bullish break above this level could make the prospect of topside continuation look considerably more attractive, and if we do see a resistance test at this price, the area around 150.00 becomes attractive for higher-low support potential. 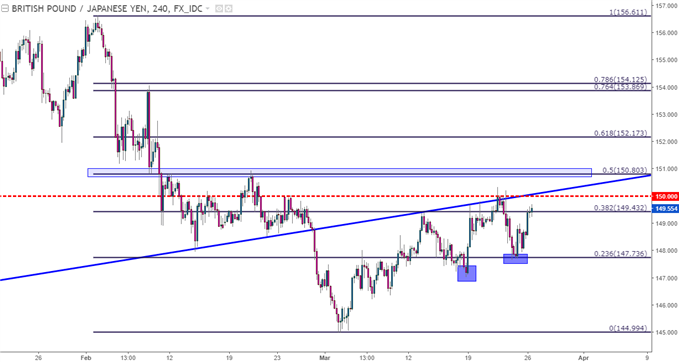 The Bearish Side of GBP/JPY

At this point, bearish reversals could still be plotted in in the pair, but given the strength that’s shown in the pair thus far this week, waiting for a bit of confirmation that sellers may be on the way back could be a more prudent way of approaching the setup. Earlier this morning, a quick swing-low developed around an area of prior resistance of 149.18. A down-side break below this level could signal the return of bearish short-term momentum, and this could open the door to downside strategies, targeting last week’s swing-low of 147.65. 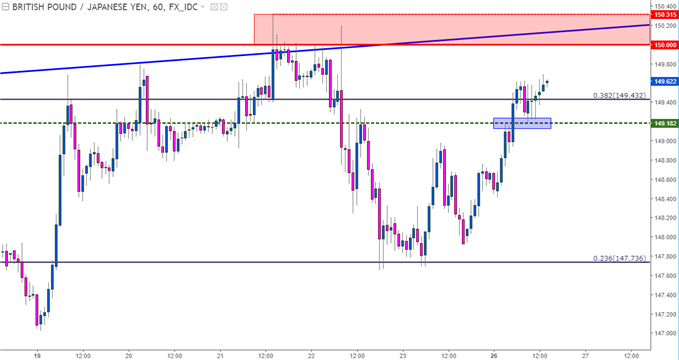 Are you looking for longer-term analysis on GBP and/or JPY? Our DailyFX Forecasts for Q1 have a section specifically for each currency. We also offer a plethora of resources on our GBP/JPY page, and traders can stay up with near-term positioning in GBP/USD and USD/JPY via our IG Client Sentiment Indicator.

Bitcoin May Rebound Based on Client Sentiment