Are you ready for some decisive moments to be made in the market? A look at the US Dollar Index and the US 10-Year Treasury yield would make it appear that one is upon us whether you’re ready or not.

The strengthening US Dollar that hall-marked both the initiation of the Great Recession in 2008 and the commodity bear market in H2 2014 were both supported by a US Dollar that strengthened beyond anyone’s expectations. Some market experts have even suggested that the Fed’s main goal is not to support the US economy, but rather support the global economy by weakening the US Dollar, the global reserve currency and thereby reduce volatility to keep markets running smoothly.

Either way you look at it, the last few days of price action likely have their attention as it may either be an aberration along further US Dollar weakening, known as a corrective move in Elliott Wave speak before the next lower impulse or the start of something they’ve worked to prevent.

In no uncertain terms, the consensus trade is getting tested in a way not expected a few weeks ago. The focus on the US Dollar had been the flattening yield curve, a secular phenomenon that picked up the pace in Q1 2017 when US Dollar Index peaked and had continued through to this month when the US 2/10 yield curve reached the flattest level since 2007. 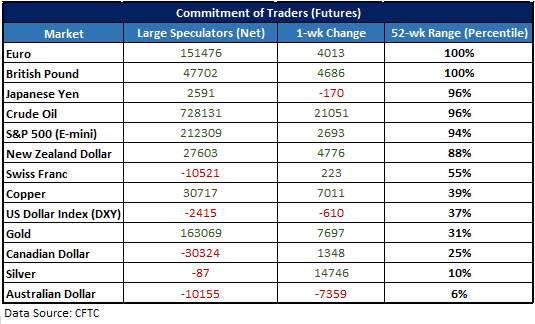 However, inflation concerns began to bubble quickly on a one-two punch of Crude Oil trading to the highest levels of 2014, a development many saw coming, but less expected, and an aggressive rise in the price of Aluminum. Aluminum broke out aggressively as counterparties scattered and paid a dear premium due to supply concerns that arose when Donald Trump issued sanctions on Russian Oligarchs, one of whom own the world’s largest supply source of Aluminum outside of China, United Co. Rusal.

Aluminum quickly traded to a seven-year high in a matter of weeks catching many off guard as the short exposure was high per the CFTC all of which helped to stoke the flames of further inflation fears.

Now, the key question becomes if the rise of inflation and the slow down, and possible reversal of the flattening yield curve will cause the Federal Reserve to lift their terminal rate. The terminal rate the rate at which the Fed voters unanimously say they should be done hiking in this currency cycle. Currently, the median dot on the Fed Dot Plot sits at 3.375%. The Fixed Income Forwards market says the level the Fed stops hiking at should be closer to 2.5%. Either way, an inflation breakout could change both views quickly and make selling the US Dollar a tough play when it was once a clean short against stronger currencies. 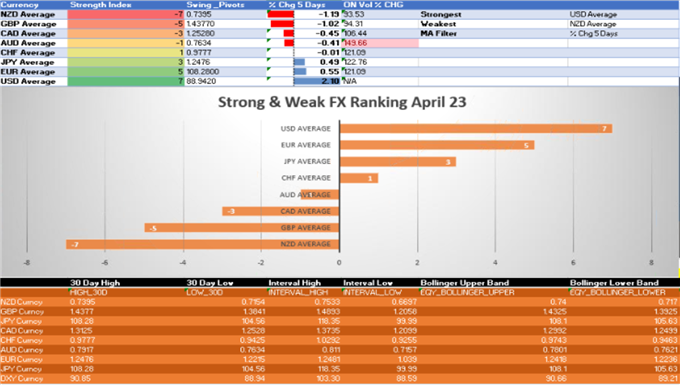 One of 2018’s top candidates for ‘Things that make you go hmmm?’ was the rising LIBOR-OIS spread that failed to lift the US Dollar. An overlay of the spread that tracks funding pressure relative to the Fed cash rate blew up beyond the January 2017 (when DXY was > 100) spread in recent weeks with the dollar failing to budge.

As noted above, some have argued that despite surface level views of US Dollar bullishness, the Fed is in the helping to support the global US Dollar liquidity picture in any way they can, which has been seen via tightening USD cross-currency basis swaps. Flat cross-currency basis swaps show that US commercial banks, who have a direct line to borrow from the Fed at the discount rate, may be injecting USD liquidity into their foreign branches and have been able to keep the scramble for US Dollar down. However, if cross-currency basis swaps begin to widen (something I commonly cover on FX Closing Bell when warranted) then the US Dollar may receive an additional bid that would be difficult to successfully fade.

In addition to rising funding costs, which appear to leave exposed currencies like EMFX or high debt levels that are depending on foreign funding like AUD particularly exposed, inflation will remain a pressing concern as the US 10-Year yield grazes 3% for the first time since 2014.

One argument as to why a move above 3% may be hard to sustain is that while the commodity bloc as a whole has had a banner month, multiple growth metrics seem to be slowing. Recently, the Citi Economic Surprise Index for the Global Economy in aggregate reached the lowest levels (meaning most aggregate disappointments in global economic announcements) since 2016. It’s hard not to look at this in tandem with the AUD/USD hitting the lowest levels for the year. 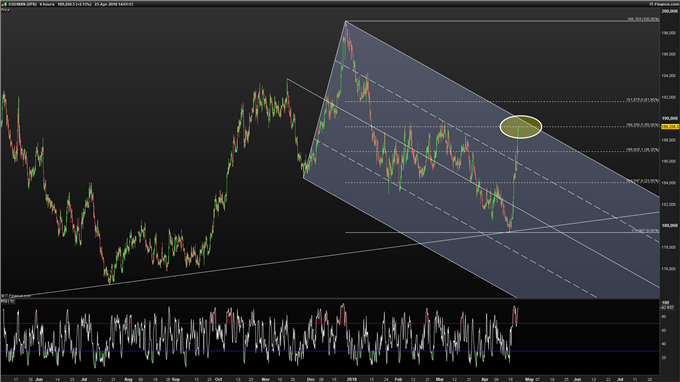 The hottest trade in terms of return YTD had been MXN that briefly traded below 18 MXN per USD this month. While NAFTA continues to be a source of confusion as the twisted road of negotiations unfold, the focus has since shifted to AMLO or Andrés Manuel López Obrador, who has recently taken the lead in presidential polls, but seems to reignite the anti-trade candidates that were popular in 2016.

Either way, the risk premium applied to the Mexican Peso appears to be insufficient meaning that the USD/MXN could rise further still. A popular way this trade is being seen is through interest rate swaps where typically institutional investors have the ability to enter into a contract to pay a fixed interest rate while receiving a floating interest rate. Naturally, this trade pays off handsomely if you are paying a fixed rate that receives an increasing floating rate over a pre-specified tenor.

In the world of fixed income and fixed income swaps, a rising interest rate environment shows that investors are selling securities with a fixed payment. This is because they either see a greater risk to the debt being successfully serviced due to growth reducing developments like trade sanctions that AMLO favors or the prospect of rising inflation making the idea of fixed returns less appealing. Naturally, the concerns of a president with anti-trade policies would focus on the former and is likely a key reason for the rising MXN 5-year swaps known as TIIE and why USDMXN is high on the momentum scorecard in favor of the US Dollar.

Havens and EMFX weaken vs. US Dollar Per RSI(3)

The three strongest currency pairs per RSI (3) is USD/CHF, USD/JPY, & USD/MXN. The common denominator or base currency in all of these is the US Dollar as the US Dollar is buying more CHF, JPY, & MXN over the last handful of trading days.

However, what is unique is the risk profile of these three currencies are vastly different. CHF & JPY play the part of haven currencies that tend to strengthen in bad times when previously risky trades are unwound and the MXN is an Emerging Market currency that tends to strengthen in good times when trades are moving capital into higher-beta economies like emerging markets.

Either way, the takeaway you can see is that the US Dollar short trade that was a consensus is being unwound and the dust will need to settle before the short US Dollar trade can be re-engaged.

There are two common ways to look at US Dollar strength. The most common is through the US Dollar Index or DXY that has thick resistance at 90.74/91. A break and close above could lead to a near gap as short US Dollar positions were near a 52-week extreme.

EUR/USD is another popular way to see the US Dollar’s technical prospects given the EUR/USD makes up 57.6% of the DXY weighting. EUR/USD has a key zone of support between 1.22/2150 followed by 1.2080. A break below would open up the potential for a sharp drop toward 1.17.

I went against one of my trading principles last week and here is what happ...