Thanks to a more 330-point recovery in the most of the major currency pairs traded higher on Monday. rebounded above 1.23 while ended the day above 106. The declines that we saw at the end of last week failed to continue even though trade tensions remain high amidst the growing risk of a trade war. The only possible explanation for Monday’s risk rally is that investors were relieved that China did not retaliate over the weekend but with President Trump singling out China by calling them “the biggest problem,” it’s only a matter of time before the Asian giant responds. Trump’s trade tariffs have received a lot of resistance at home and abroad. The WTO blasted the announcement by saying that “an eye for an eye will leave us all blind and the world in deep recession.” Even House Speaker Paul Ryan urged Trump to not advance the plan as Republicans are “extremely worried about the consequences of a trade war.” Today’s rally in currencies and equities could also reflect the market’s hope that Congress will block the tariffs, after saying “Congressional leaders will not rule out potential action down the line if Trump continues with the plan,” but Trump says “he will not back down,” so it remains to seen how far Republicans will go in resisting the President. While USD/JPY’s recovery looks like it could extend to 106.50/80 on a technical basis, fundamentally, we still believe the pair is a sell on rallies until trade-war tensions ease.

Monday’s worst-performing currency was the and the currency’s weakness is also a direct result of trade. Aside from singling out China, President Trump used the tariffs as a threat to NAFTA by saying that they will only come off if a new and fair NAFTA agreement is signed. These harsh words imply that Canada will not be given an exemption. This is an important week for Canada and while the central bank may want to join in the debate, there’s no question that they will be concerned about the economic implications of the tariffs as Canada is the number-one supplier of both and to the U.S. 1.30 is an important resistance level for but trade concerns are serious enough to drive USD/CAD to 1.33 and possibly even 1.35. Canada’s index is scheduled for release on Tuesday – a rebound is expected after 3 straight months of weakness but the outlook for the manufacturing sector is grim given recent developments.

The Reserve Bank of Australia meets and traders shouldn’t expect much from the central bank as there hasn’t been any meaningful traction in the Australian economy over the past few months. Since the last meeting in March, declined, fell, slowed, eased, activity slowed and the doubled. The only good news is that the weaker is driving commodity prices higher and for the time being, and activity remains healthy keeping stable. The RBA has very little reason to change its neutral policy bias so the reaction in the should be limited. Instead, beyond an initial move, the Australian dollar should continue to take its cue from the market’s appetite for and risk. The ended lower ahead of Tuesday’s . 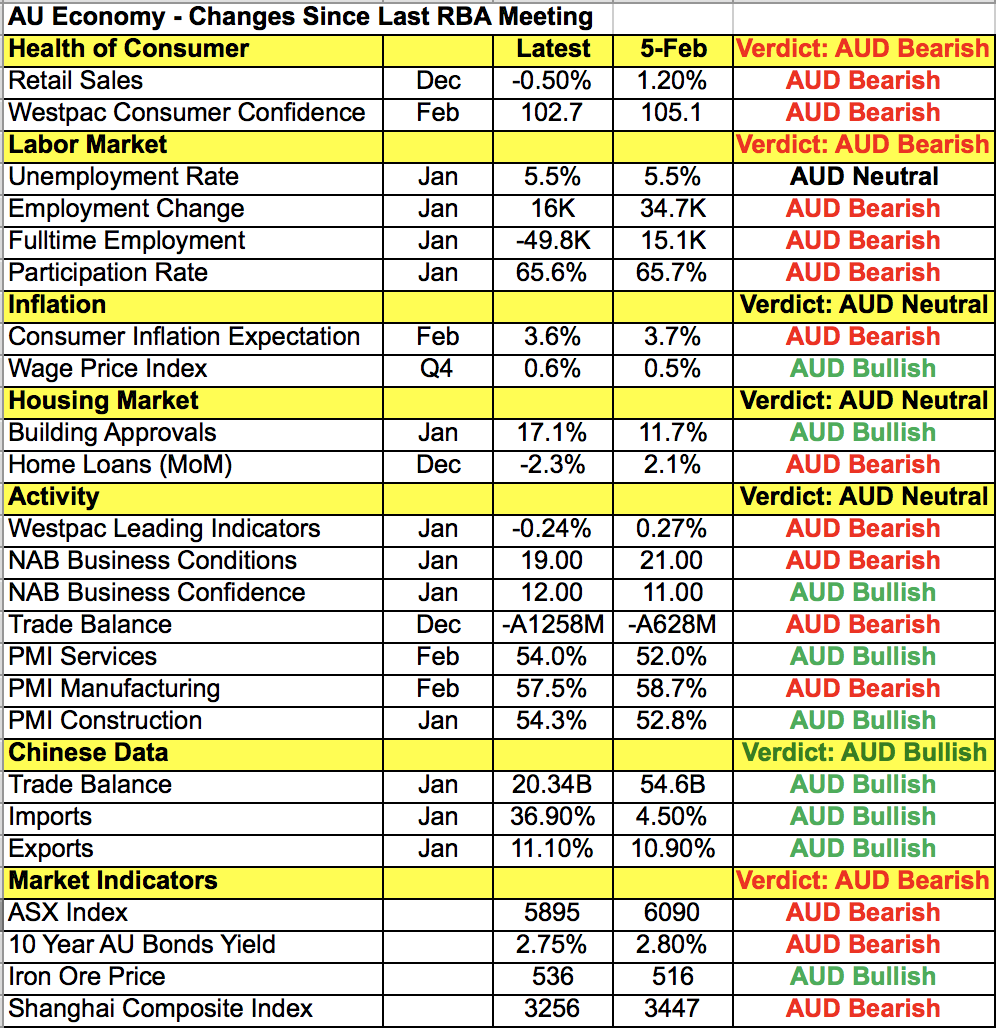 Both and ended the day higher against the greenback. Although the election in Italy did not result in a clear majority, investors were relieved that the Social Democrats voted ‘yes’ on forming a coalition with Angela Merkel’s conservative party. This ends nearly 6 months of political uncertainty and puts Germany back on track to focus on its recovery. Like Germany, Italy’s political stalemate could last for months. It’s unclear which party will be given the right to form a coalition government and how long that will take. Regardless, the big winners were the Euro-skeptic anti-establishment parties, which means that the new Italy will be less supportive of the euro and European Union. Sterling on the other hand received a boost from stronger PMIs as accelerated in February.

Gold At Critical Juncture. Watch These Catalysts For What’s Next
Scroll to top