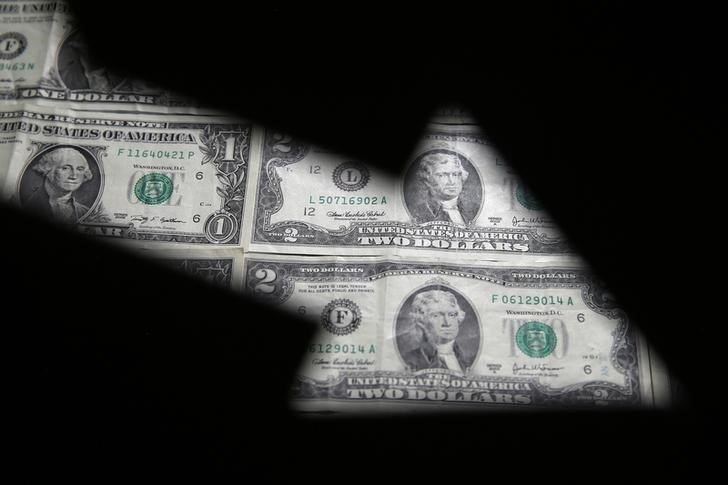 * WSJ report on Huawei, toll of U.S. shutdown in focus

The , which measures the greenback against six major peers, stood at 96.055 after gaining half a percent during the previous two sessions.

The U.S. currency largely held onto its gains against the euro as persistent worries about the euro zone economy weigh on the single currency.

Data this week showed Germany barely avoided slipping into recession in the second half of 2018 and European Central Bank chief Mario Draghi warned on Tuesday economic developments in the euro zone economy have been weaker than expected. dollar was trading a shade lower on the euro at $1.1399 after rising five straight sessions against the single currency, during which it gained about 1.5 percent.

Catching investors’ attention was a report in the Wall Street Journal that U.S. federal prosecutors were investigating Huawei Technologies, for allegedly stealing trade secrets from U.S. businesses and could soon issue an indictment. in focus were concerns the U.S. government shutdown was starting to take a toll on its economy.

The Japanese yen , a perceived safe-haven in times of turmoil, edged higher against the dollar partly on the back of the worries. The dollar lost 0.1 percent to 108.95 yen.

The British pound was stable after May survived the no-confidence vote and invited other party leaders for talks to try to break the impasse on a Brexit withdrawal deal after the proposal she presented was voted down by lawmakers on Tuesday. outline for May’s plan ‘B’ is due by Monday and the market assumes there will have to be an extension of the Article 50 exit date past March 29.

“It’s unlikely there will be big changes to May’s plan, so parliament is likely to oppose it as well,” said Yukio Ishizuki, senior currency strategist at Daiwa Securities.

“The pound had been oversold so it’s naturally that it bounced back, but as the Brexit situation remains unclear going forward it’s too early to say the pound’s weakness has ended,” said Ishizuki.

In early Asian trade, sterling was trading at 88.48 pence per euro EUROGBP= , hovering close to a seven-week high of 88.37 pence touched during the previous session.

May said late on Wednesday the opposition Labour Party had yet to discuss a new approach to Brexit with her and urged politicians to put self-interest aside to work to break the impasse. by Jacqueline Wong)