Blog - Latest News
You are here: Home / Forex_news / Fate of the single currency to be decided by forthcoming ECB meeting

Article provided by FxPro, an industry-leading online
broker regulated by the FCA.

The ECB will be choosing their words carefully
at their forthcoming monetary policy meeting. It is likely that the wording
used will determine the future direction of the single currency, which has been
trading in a range against the U.S. dollar for the past 3 months 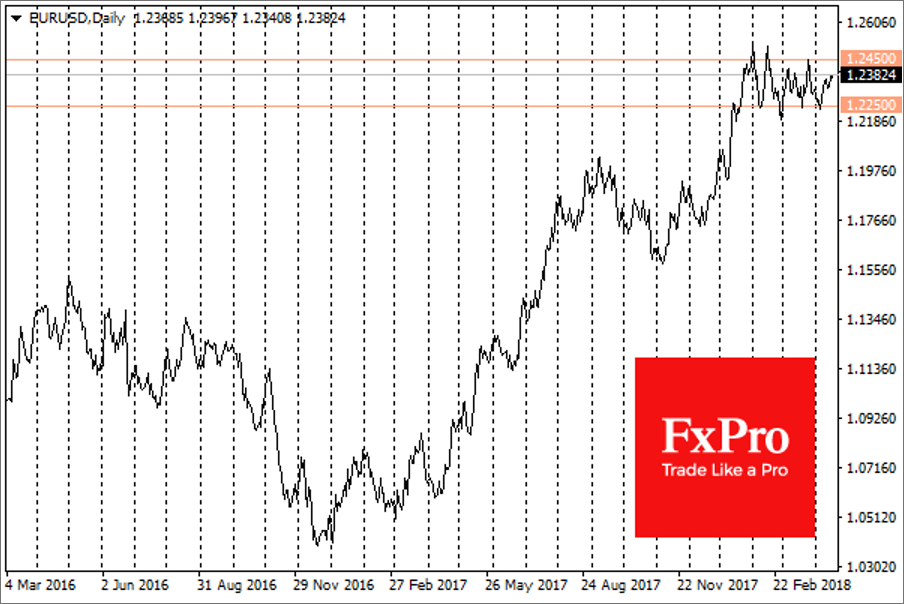 Earlier this
year, the ECB announced their intentions to wind down their asset purchasing
program by the end of 2018. These comments contributed to the growth of the
single currency, as many investors bet that more decisive steps would be taken
towards the further tightening of monetary policy. While the economy continues
to grow, there is increasing evidence that the ECB can take a more cautious
approach. 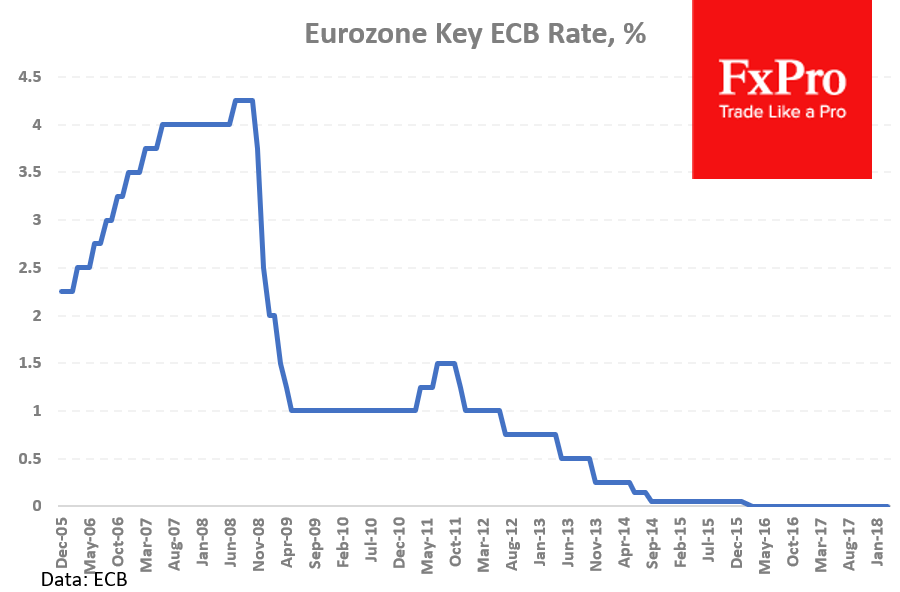 In March,
signs that economic growth was decelerating began to appear. The Purchasing
Managers Index (PMI) data – a good leading indicator for business activity –
for February and March registered a decrease from multi-year highs, to levels
last seen at the beginning of 2017. The latest
Composite PMI reading of 55 still indicates economic growth, albeit at a slower pace than
previously. 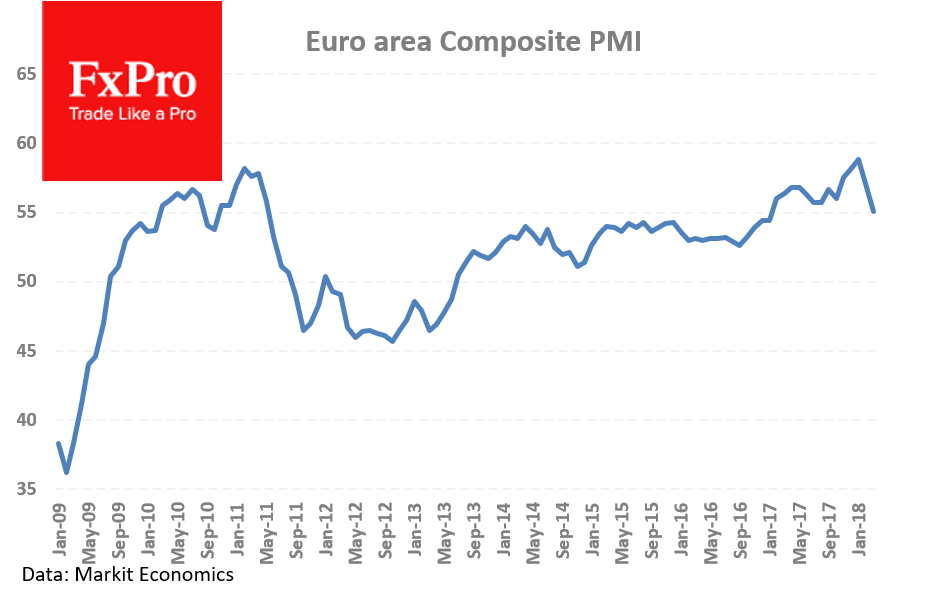 This trend of decelerating growth is also confirmed by
other economic indicators of business activity for the region. Recently, the German
index of business sentiment, published by ZEW,
fell into negative territory – the lowest levels since
2012. 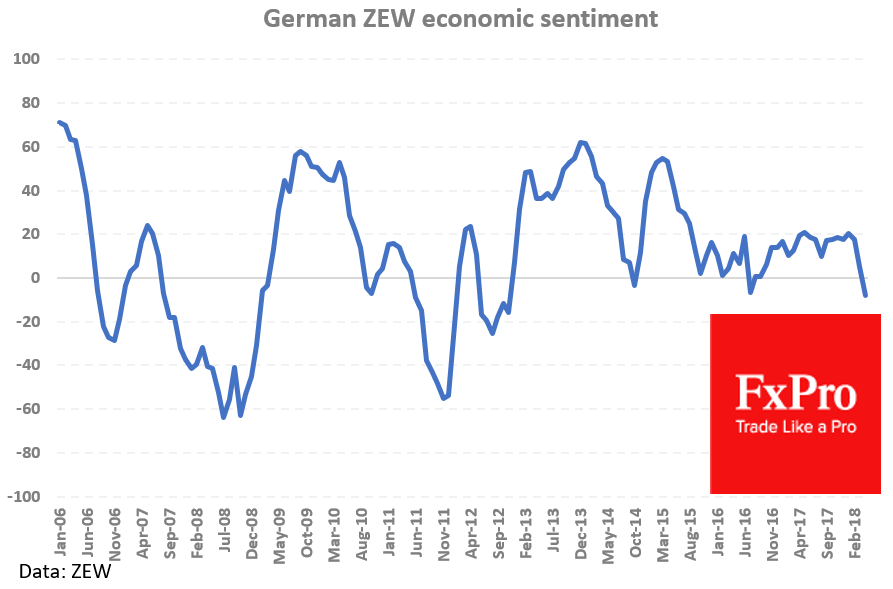 It is very important for the ECB to raise inflation
closer to 2% as a sign of economic health. However, other than a brief touch of
this level at the beginning of 2017, price growth has only decelerated. The
latest data indicates inflation of 1.3% YoY, lower than November’s 1.5%.
Core inflation, excluding food and energy, is stable at 1% – 50% lower than the
ECB’s goal of 2%. 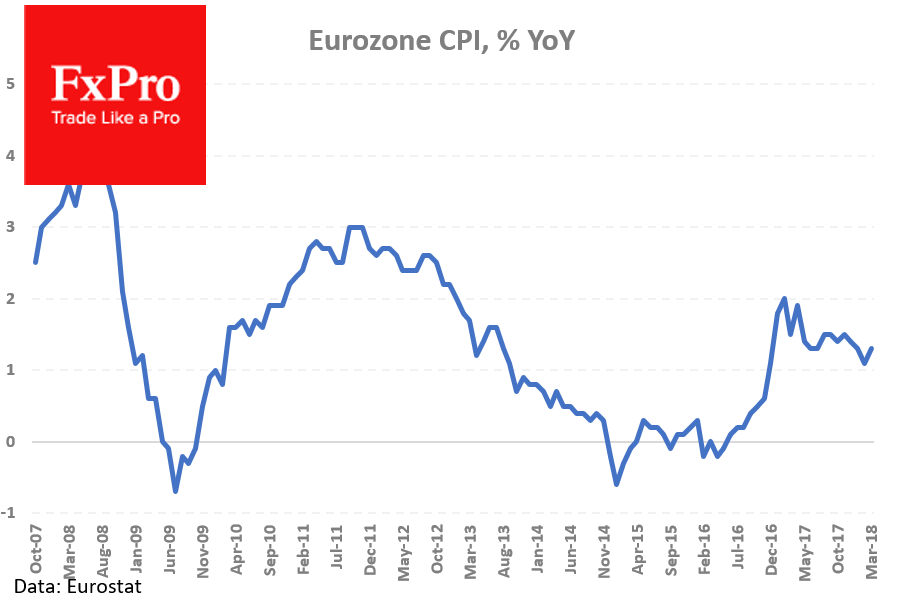 Weak inflation and slowing economic growth are, to
a large extent, caused by the current strength of the single currency. Over the
past year, it has grown 18% against the U.S. dollar, acting as a powerful
headwind and limiting the Eurozone’s economic growth. 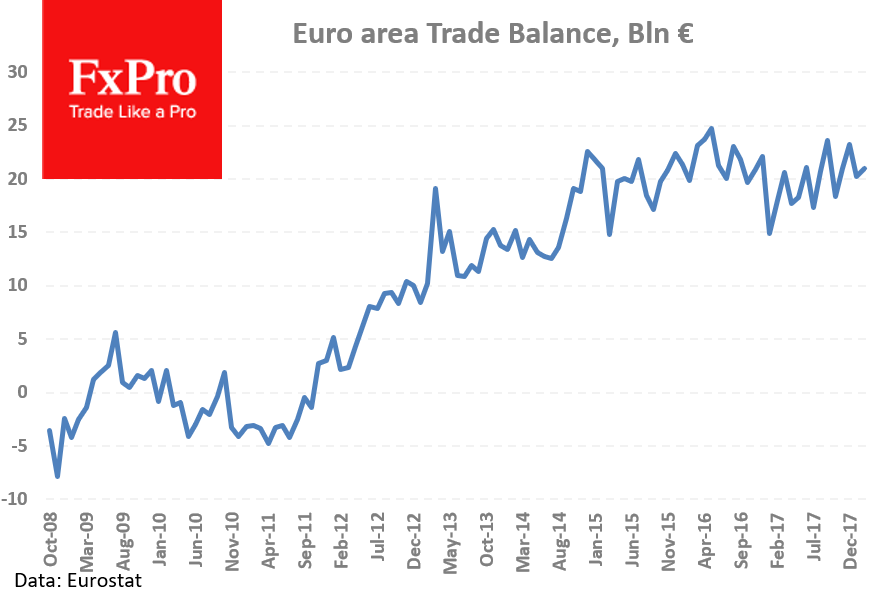 The weakening
of the single currency between 2011 and early 2017 led to a growth in the foreign trade balance, from near zero to a monthly average of 20 billion. In the last year,
however, the growth of this indicator has stalled. The impressive growth of the
global economy throughout 2017 helped to boost this trade surplus. The
acceleration of the Chinese and U.S. economies had raised demand for European
goods, but now this demand seems to have been exhausted.

Despite the
perennial lows in the unemployment rate, and the impressive growth rates of the
economy, the ECB is unlikely to rely on strong domestic demand as a driver for
inflation. Retail PMI is currently near 50, reflecting the balance between a
slight downturn and growth. The retail sales index, while demonstrating growth YoY,
has slowed since the middle of 2017.

The Eurozone’s
unemployment rate currently sits at an impressive 8.5%, the lowest level in 10
years. However, as can be seen in Britain, the United States and Japan, even
the lowest unemployment rates in 20-40 years are not enough to positively
influence wage growth and consumer prices. 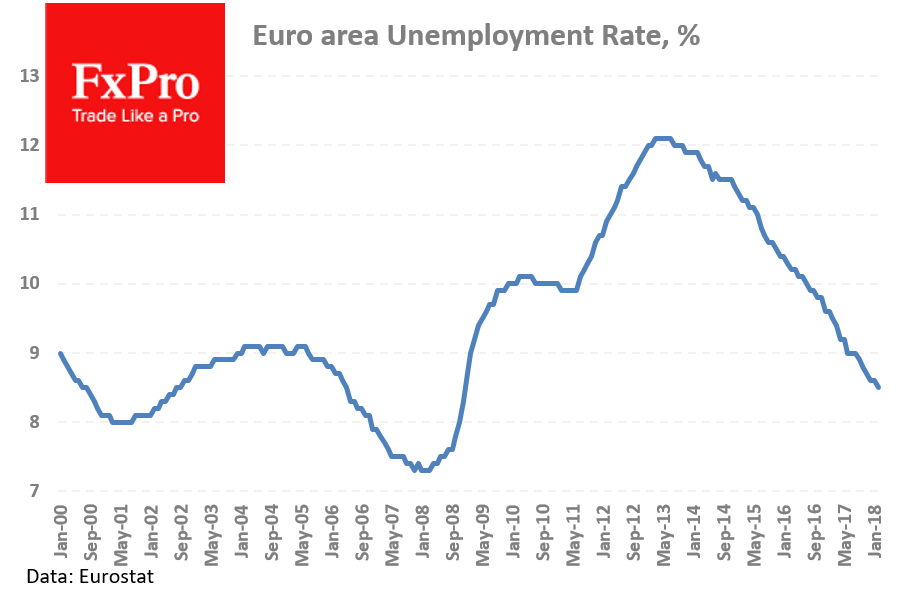 It may be a
suitable strategy for Draghi to reassure the markets that the bank acts on the
basis of data and that this data does not yet indicate that the rapid growth of
inflation should be feared.

If this
happens, the common currency is likely to fall under pressure due to the
expectations for a rapid winding down of incentives and a quick increase in
rates by 2019. As a result, the pair may quickly lose support and fall from the current highs near 1.24 to the 1.20 level.

Assurances
that it is the economy that stands in the way of impressive growth, coupled
with confident forecasts for future growth, will likely help the euro, pushing
the EURUSD pair out of consolidation and up to new highs. If this is the case,
the pair will be able to quickly reach the important level of 1.30.

Disclaimer: This material is
considered a marketing communication and does not contain, and should not be
construed as containing, investment advice or an investment recommendation or,
an offer of or solicitation for any transactions in financial instruments.

Carney’s concern over a mixed bag of UK data

Canadian CPI and retail sales are coming up
Scroll to top